par avion said:
There's one thing shagging it - getting a few tips from an older women to practice when you are shagging the younger chicks.

Its another thing entirely when you marry her.
Click to expand...

oscar1whisky said:
And what possible use to the flood victims is a visit by Boris? Is he supposed to part the waters, Moses like, and personally remove umpty gazillion litres of muddy water to cheers from a relieved public? His job is to run the government, who have appointed ministers, civil servants, national agencies and experts to do the hands on stuff.
He and his entourage of politicians, aides and advisers, and a gaggle of press & tv reporters arriving on scene only get in the way of those actually doing something practical to resolve the problem.
Those, like you, who look only for opportunities to denigrate the PM are, like Labour, quick to complain but never having any ideas.
Click to expand...

Perhaps ask Jarrod what human meat tastes like, I don't think there will be many cannibals posting here
Join me at Torn-City - Massively multiplayer online text based RPG , meet interesting people and put them in hospital

dogmeat said:
To be fair, the are Tory floods, after all.
Click to expand...

lokiuk said:
Perhaps ask Jarrod what human meat tastes like, I don't think there will be many cannibals posting here
Click to expand...

I was working for the Indonesian government last year and wanted to conduct a site survey in Papua. The government would not authorise it because they could not guarantee my safety. During the time I was in Jakarta (and further South) 2 tribes attacked each other in Papua. The winning one killed 10 of the losers (including some kids) and when the police/troops arrived they had butchered them. I would suspect that the practice of eating long pig still goes on.
You can't reason with someone who doesn't understand the concept of reasoning, it's like trying to administer medication to someone who is already dead.

Emcon Ecomcon said:
Its important... Decision making has a permanance, that cuts across generations. So the hated boomers actually voted for the common market, but did so out of a rational circumstance, the response to the perceived failure of the time, which were very clear to them, given hardly any went to university..... The young today, who are so hot for remaining members of the EU, are only taught the benefits of the EU and neither understand the failures of the EU, or had time to accumulate any fear of it.

I think you may be shocked at what the young today believe in say 10-20 years. They're statistically, hold far harsher attitudes towards the poor, than the boomers and on some level are already angry and haven't seen much to be so angry, thus assuming that trend increases.

Is there data to support that young people today hold harsher attitudes towards the poor? As I wonder how this fits in with most young are supposedly more likely to vote centre-left/left. Also, what is meant by harsher attitudes?
Do not go gentle into that good night.

Bridget Bardot? Ball bearings?
How's the house clearing business going? Got a 'phone you can talk to other countries with, yet?
CENT 05ZR70.Last seen at Marchwood, (by Nobby) Heading for Israel.
You may, if you wish, call me Jerry. Archduke Charles said it is my name. I dunno, I think he's a twat.
E

amazing__lobster said:
Is there data to support that young people today hold harsher attitudes towards the poor? As I wonder how this fits in with most young are supposedly more likely to vote centre-left/left. Also, what is meant by harsher attitudes?
Click to expand...

IPSOS MORI Social Research 2013, the Intergenerational Justice Research Report..... It covered a broad sweep of analysis, which I think Goodwin accessed to demonstrate how the young parrot liberal ideas, but have very strong opinions on subjects which are traditionally conservative.
W

dogmeat said:
To be fair, they are Tory floods, after all.
Click to expand...

And in some cases "lets build lots of houses on a flood plain" types of flood.

It's almost as if the words 'flood plain' are trying to tell you something...

dogmeat said:
To be fair, they are Tory floods, after all.
Click to expand...

Ah, but it is God ( who is English) at work here. All that good British rain washing the heathen Welsh and Scots, then flowing down good English rivers and increasing the sea levels, driving back foreign rubber boats of invaders and putting migrating white bears back in their place, while simultaneously improving the living standards of good British fish. Tory planning at its best.
www.dakkadakka.com

Emcon Ecomcon said:
No one ever really knows, because the hand that wields the knife is always a domestic politician.... The defining moment for me was after blair was turfed out and brown signed a EU treaty behind closed doors and broadly against his will.
Click to expand...

Proud to be an uneducated, racist, right wing moron.

Wordsmith said:
And in some cases "lets build lots of houses on a flood plain" types of flood.

It's almost as if the words 'flood plain' are trying to tell you something... 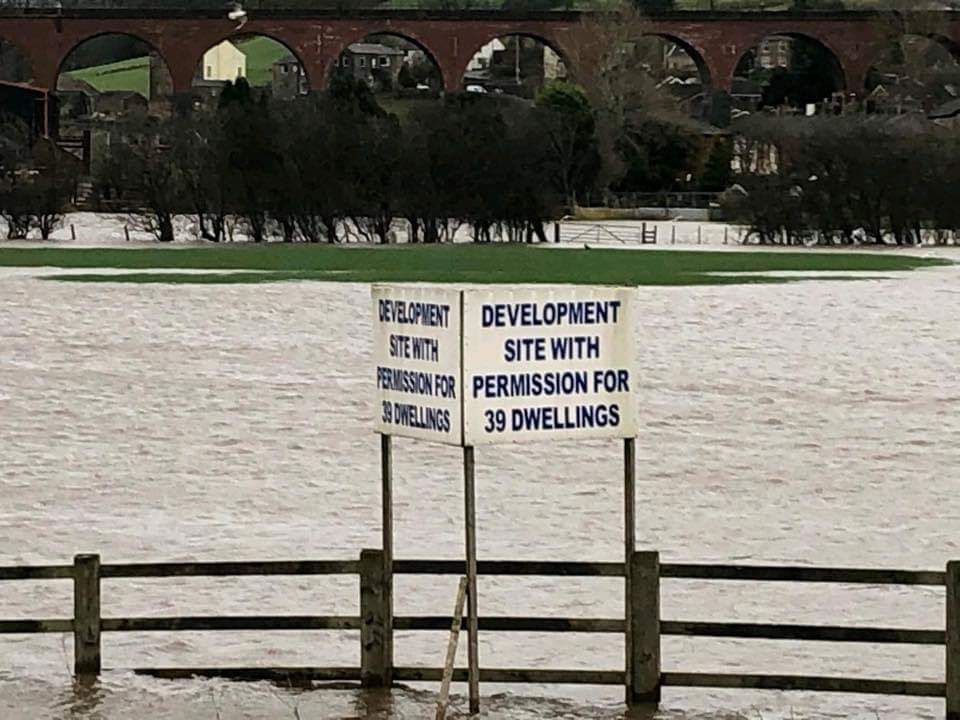 You can't reason with someone who doesn't understand the concept of reasoning, it's like trying to administer medication to someone who is already dead.
E

Brown had being sold as a eurosceptic, just as Thatcher, Major and Cameron were supposedly eurosceptic..... All kowtowed and made me develop a default towards fence sitters, that they're are liars.

Otherwise purple monkey dishwasher, and we all know what that leads to, right?

That actually makes sense to me, should I be worried?
Circle, square, triangle, waves
They are open to me like a flower
How would you like to have your mind caressed
Can't you feel that I'd possessed with
PSI power PSI power PSI power…

Emcon Ecomcon said:
Brown had being sold as a eurosceptic, just as Thatcher, Major and Cameron were supposedly eurosceptic..... All kowtowed and made me develop a default towards fence sitters, that they're are liars.
Click to expand...

From his wiki page

"Brown and the Labour party had pledged to allow a referendum on the EU Treaty of Lisbon. On 13 December 2007, Foreign Secretary David Miliband attended for the Prime Minister at the official signing ceremony in Lisbon of the EU Reform Treaty. Brown's opponents on both sides of the House, and in the press, suggested that ratification by Parliament was not enough and that a referendum should also be held. Labour's 2005 manifesto had pledged to give the British public a referendum on the original EU Constitution.[97][98] Brown argued that the Treaty significantly differed from the Constitution, and as such did not require a referendum. He also responded with plans for a lengthy debate on the topic, and stated that he believed the document to be too complex to be decided by referendum."

Proud to be an uneducated, racist, right wing moron.
L

amazing__lobster said:
Other countries aspire to get more people into university. Wonder why certain types here, are against that sort of thing.
Click to expand...

Because in the main universities are run for money and constant applications to go to Uni cost money and it's a gravy train. They are not there to enhance your learning, they are there to fill their pockets, it's a commodity. It is only friendly to you if you are in academia and want to make your fortune there.
Last edited: 19 Feb 2020
NULL
L

45x45 said:
I see Johnson is out and about during the flooding giving reassurance to the public. Tosser won't even consider it an emergency.
Click to expand...

oh really- It's rained a lot and it's flooded and the money already spent didn't work, because it friggin can't. You think Boris needs to tell people that like some king with a scroffulous healing cloak. Oh look I really care? Even if he did he'd be out there like Cnut teaching his courtiers that he can't stop the tides. When it rains a lot it floods, that simple, stop being mugs and buying houses on flood plains. Tosser has already said that emergency cash will be available to councils. I'd be far more impressed if we dug a few more holes for catchments so that when we have a very hot dry summer, they don't need standpipes.
NULL
L

From memory, I think the body language said it all TBF
NULL
P

yes, most teachers are indeed rubbish.
Nothing surpasses the beauty and elegance of a really bad idea....
You must log in or register to reply here.