https://www.facebook.com/kimjongillookingatthings?v=wall
Sitting on top of the World


Lets hope he never gets the chance to...

Look at pushing big red button.
Steven Seagull is a rotten, internet bully, a seventh generation ****, he was born in a state of misery, half-cooked with a mean streak a mile wide. Over the years he has developed a passion for human oddities, presdigitation, tattooing and torture.

For all other things, there's communism!
Light travels faster than sound. That's why most people appear bright..........until you hear them speak!

"Our Dear Leader, looking at glass."

Looking at chocolate...I don't think so! The geriatric old git is nicking it! Look at that store detective go...straight to the North Korean Gulag type thing that is...
Dishonour before death!!
My Service Career and work ethic - Too much a poof for the SAS, too lazy for P Coy, too sea sick for the Marines, too inept for anything vaguly glamourous, but not too scared to ask that fat MT lass to dance down the bop.

I believe the chubster in the last couple of photographs is the "annointed" one, who takes over when Dad finally heads off to that great utopia in the sky. The poor sods in N Korea have decades of this sh*t ahead, unless they follow the recent N.African lead.
The memories of a man in his old age, are the deeds of a man in his prime.
Roger Waters 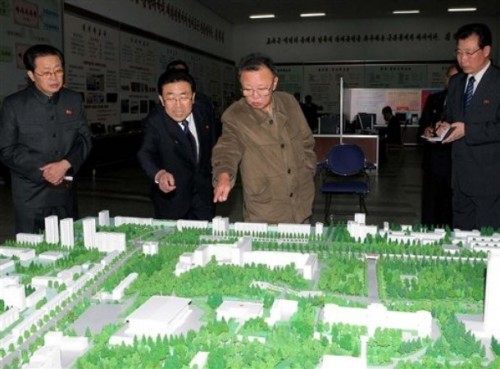 "What is this? A center for ants? How can we be expected to teach children to learn how to read... if they can't even fit inside the building?"
I'm Chuck Norris, and I approve these detainee handling techniques...

He's not looking at things. He is in deep thought about his achievements.

According to the North Korean news he is:

Kim Jong Il, who besides being North Koreas Dear Leader is also the Supreme Commander of its Revolutionary Forces, was a star runner, swimmer, horse-rider, chessman and bridge player as a youth (as any good party member knows). But his greatest sports ability is no doubt lies on the green. According to North Korean news media, Kim Jong Il is a scratch golfer, having scored 38 under par in his very first try at the game.

Were all Forrest Gumps compared to Kim Jong Ils rate of childhood development. According to official North Korean biographies of the Dear Leader, Kim learned to walk by the age of 3 weeks, talk by 8 weeks, and he wrote his first manifesto on the future of the Korean people by the age of 2 years.

Despite what youve been told, the North Korean government has stated that it was the Dear Leader who invented the microwave oven, the radial tire and the hologram (all apparently before he reached the age of 6, as these are technologies that appeared in the mid-1940s just after Kims birth).

Yes folks: Kim Jong Il (who, if you didnt know, is also General Secretary of the Workers Party of Korea) was born under near messianic circumstances. If official reports are to be believed, the Dear Leader was born on the top of Mount Baekdu. When he was born, two rainbows split the clouds, and a new star appeared in the sky that made the Korean peninsulas nighttime visibility brighter. Some sources even say that at the moment of Kims birth, a monster appeared out of the ocean and sang the Korean national anthem.


And you think he spends all day looking at things!!!!
We’ve all heard that a million monkeys banging on a million typewriters will eventually reproduce the entire works of Shakespeare. Now, thanks to the Internet, we know this is not true.

Not got the most extensive wardrobe, couple of jackets, and pair of trousers that don't fit.

Rooking at grass?
Steven Seagull is a rotten, internet bully, a seventh generation ****, he was born in a state of misery, half-cooked with a mean streak a mile wide. Over the years he has developed a passion for human oddities, presdigitation, tattooing and torture.

Is Bugsy related to Kim Jong-Un

North Korea - Warring with the World

A
peace in our time, trump and rocket man shake hands in north & south korea.