Books on The Falklands War

Its a novel, but dont let that put you off.
Regards,
Rob Lofthouse.

Book Reviewer
I am sure I have read all this thread but am on the tablet and cannot arrsed to check, so apologies. Since we are onto novels, I have on my Kindle "The Fireflies of Port Stanley", a what if there had been big Sherman's on the islands in 82.

Goose Green by Mark Adkin, 100 Days by Sandy Woodward and for a civvie view 74 Days by John Smith. The Max Hastings one is good overall, and the Falklands sections of Mike Curtis's CQB is quite good too.
"The fact that slaughter is a horrifying spectacle must make us take war more seriously, but not provide an excuse for gradually blunting our swords in the name of humanity. Sooner or later someone will come along with a sharp sword and hack off our arms." Von Clausewitz

Hugh Bicheno's book Razor's Edge - The unofficial history of the Falklands war is a cracking read, detailing very well the political and intelligence elements that led to the outbreak of the conflict, as well as the battles themselves. A very good overview of the conflict.

AlienFTM said:
I am sure I have read all this thread but am on the tablet and cannot arrsed to check, so apologies. Since we are onto novels, I have on my Kindle "The Fireflies of Port Stanley", a what if there had been big Sherman's on the islands in 82.

Would Shermans have been able to traverse most of the terrain on most of the Falklands? I know CVRTs were successfully used there but they have very low ground pressure.

Link with some info about Argentine Shermans:


Apparently many of their Fireflies had been upgraded in the late '70s to a standard similar to the Israeli M51, with French 105mm (low-pressure?) guns and Diesel engines. This was for use on the Chilean border and presumably this is where they were in '82.
Last edited: 15 Mar 2014
G

I post with a degree of trepidation: I've never served in the forces, and so write the below with much respect and some caution. Hope people won't mind.

I recently watched Fix Bayonets: the Battle for Goose Green on YouTube and found it fascinating, and the people in it seriously impressive.

I'd actually met John Geddes (pen name) who features in it years ago at a friend's house - he's quite a character (to put it mildly - you'd want him in your corner in a tough situation!). Also found Phil Neame very impressive, too - in an understated way. Clearly very level-headed and pragmatic, and solid.

Anyway, I went on to read Spearhead Assault: Blood, Guts and Glory on the Falklands Frontlines by Geddes, and found it moving, and interesting (in that order; as a reader you're really placed in the thick of things, and the suffering and loss of life are very much brought home, as is the remarkable bravery - it is harrowing). Reading this book in addition to the documentary makes for a thought-provoking combination, in many dimensions.

Thinking it would be interesting to get a different perspective, I then went and read Cedric Delves' Across an Angry Sea: The SAS in the Falklands War, which is very different in tone and outlook.

In fact, they're so different, it's an interesting comparison. Delves perhaps tends to describe, but stop short of judgements or lessons. Which was interesting, as I sense he felt there were quite a few, all round. It was, for instance, remarkable to me that their equipment was so limited. Perhaps that reflected a lack of funding, or simply the fact that it was harder to buy decent outdoor gear back then.

Even when it came to boots, the books are interesting. Delves said he used DMS boots, which were poor, except one time when he forgot to change out of the jungle boots he was wearing around a ship. Whereas Geddes describes deliberately wearing jungle boots, finding that the better ventilation and faster drying materials were an advantage. Geddes also describes a member of an SAS patrol (one of Delves', I think - though I'm not certain) wearing wellies (and carrying a GMPG with the ammo belt coming out of his rucksack!).

Anyway, very interesting books. If there is further discussion of them anywhere (I know there's some limited discussion here on ARRSE), it would be fascinating to read - though I suspect that's unlikely. I also may read another book about the conflict. I years and years ago read McManners' (and met him once; again has something about him) and Hastings', and more recently read one about the Sea King to mainland Argentina mission (by the pilot, I think). Though it would be really interesting to hear one about how the conflict led to any changes, lessons learned, the use of strategy, etc.

Perhaps the next should be one focused on the Marines, or indeed a different regiment in the Army.
Last edited: 13 Feb 2021

I'll just put this out there.
Amazon product
It has drawings and words and stuff 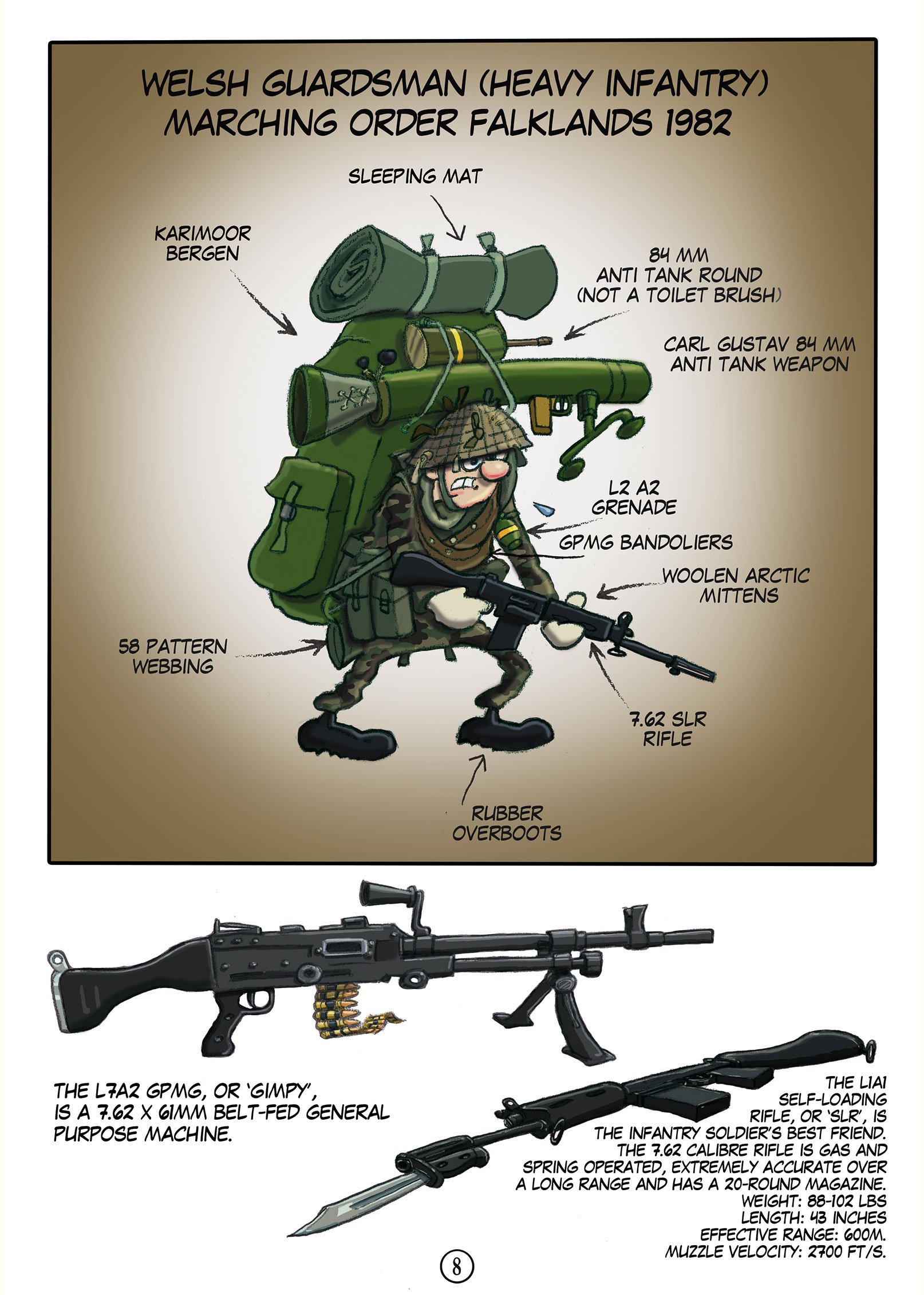 IIRC someone on here is the Author.

Thanks for the suggestions - much appreciated.

arfah said:
This is excellent

What, as a work of fiction?

Maninthestreet said:
I'll just put this out there.
Amazon product
It has drawings and words and stuff


IIRC someone on here is the Author.
Click to expand...

still21inmymind said:
Battle For The Falklands by Max Hastings & Simon Jenkins gives a good background to the political mess that resulted in Op Corporate, and a reasonable coverage of the military side. For more specific reading there is a list at Falklands War books
Click to expand...

Another vote for this book authored by two journalists, Jenkins covered the political aspects of the war in London, while Hastings was with the task force and was, iirc, the first man into Stanley.

Author was there. It probably felt like that to the chap.
Last edited: 16 Feb 2021

Maninthestreet said:
I'll just put this out there.
Amazon product
It has drawings and words and stuff


IIRC someone on here is the Author.

I have a copy and I like it for a bedtime dip into , Will wrote and drew this as a Guardsman ( Welsh ) in a format easy for me as an ex Guardsman to read,( pictures and gallows humour ) and I can relate to this, happy and sad.
Don't just live, but live for a purpose bigger than yourself.
Be an asset to your family, community and country.
B

In fairness to Phillips' book, there are some very good elements in it - namely the interviews with and accounts of the participants from both sides. It's his interpretation that descends into complete nonsense.

The Falklands War – There and Back Again: The Story of Naval Party 8901

The War in Italy