"I'm deeply disappointed that after a further review the correct decision's still not been reached,"

Why anyone joins the armed forces or any of the uniformed branches of government is beyond me. Parliament looks after its own and as @Simmerit says will throw you and me under the bus in a heartbeat.
'Pay peanuts get monkeys'
'Quality costs, you get what you pay for'
Professional footballers and bankers show these statements as tosh.

I dunno, lets see what knew evidence appears at any trial.
P

"Her solicitor Darragh Mackin said they would now be seeking a judicial review of the decision.

"The issue of joint enterprise and conspiracy remains entirely up in the air and a decision has allowed to be taken premised on the actions of individuals and soldiers falling between the gaps of the grey area as to who actually fired the fatal shot," he said.

"As we all know in the issue of joint enterprise, where two or more individuals act collectively in a specific act, the charge can be brought."

Good luck with trying to prove that beyond reasonable doubt almost fifty years after the event.

par avion said:
Good luck with trying to prove that beyond reasonable doubt almost fifty years after the event.
Click to expand...

In a lot of cases, it has nothing to do with proving facts long after the event - It is about keeping the money rolling.

Douglas Murray is a fairly well-respected author, I found his book about the Saville Enquiry interesting: 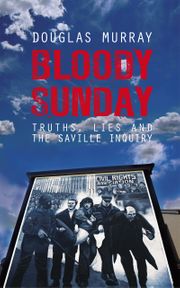 Portree Kid said:
In a lot of cases, it has nothing to do with proving facts long after the event - It is about keeping the money rolling.
Click to expand...

Not just the money, think of the outrage that can be propagated into the next few generations from this long-denied "justice"... You can keep a sense of injustice going for centuries.

Refoming the House of Lords
2