Bloke on the Range videos

Ooh, and yesterday someone brought an L85A1 blocked at semi with a B+T rail system on it. I had a play. A real point-and-click interface (but heavy) on the reactive torso-sized targets. The rail system improves the balance but makes the thing even heavier....

Although I did enjoy showing off nailing the 280-ish metre one with my stock M16A1 and Frankenrifle with the 0.2" battle sight, standing.
Come visit my YouTube project: https://www.youtube.com/channel/UC9k2WzcJ1kUMl4KIwNQwrFA

At the PCC match yesterday I had my Sterling mags in one of these Portuguese pouches. They're normally mis-identified as British STEN pouches and sold as such: 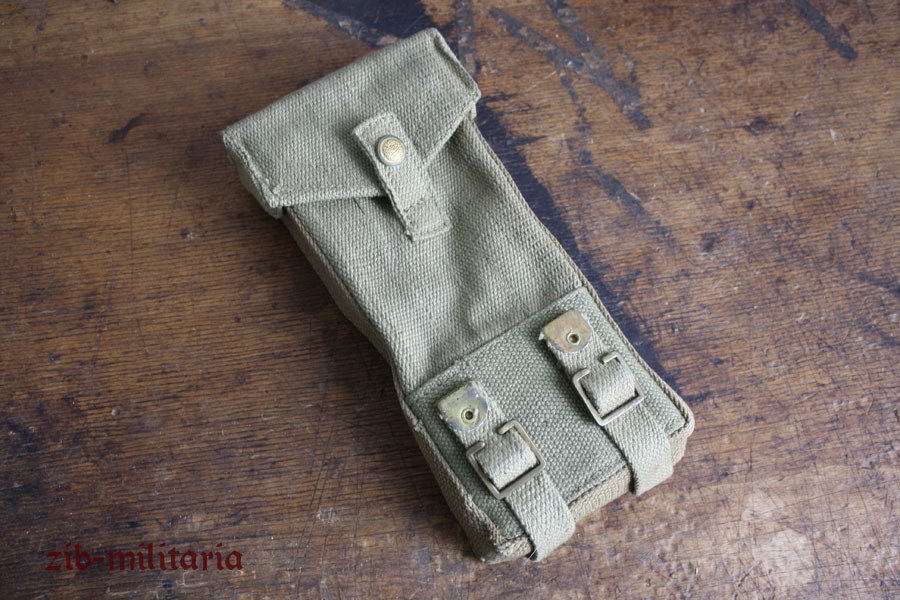 But really, what were they thinking with that design? The belt loops are in the middle and there's no provision for a shoulder strap attachment. So they flop around a bit. They work, I'll likely use them again cos they're quite stiff and have dividers, but they're pretty terrible as a design. Might adjust them by adding a new set of loops in a more sensible location and cutting the lid off (the fastener's karked on mine anyway).
Come visit my YouTube project: https://www.youtube.com/channel/UC9k2WzcJ1kUMl4KIwNQwrFA

stoatman said:
Sterlings. Mine gave me no trouble aside from on one stage the "sear sometimes and entirely randomly won't release if you squeeze too gently when set to R" thing cost me some time, but not enough to catch No.2 had it not happened.
Click to expand...

1. Take a look at the sear & tripping lever profiles for uneven witness marking, Stone out, or replace.

2. Check the springs under the sear and the sear cradle.

Failing that, check the body for any dents or dinks which might hold the bolt up.
"I do not resent criticism, even when for the sake of emphasis, it parts for the time with reality" WSC

1. Take a look at the sear & tripping lever profiles for uneven witness marking, Stone out, or replace.

2. Check the springs under the sear and the sear cradle.

Failing that, check the body for any dents or dinks which might hold the bolt up.
Click to expand...

Thanks. I shall pass that on to my tame gun plumber if it doesn't just sort itself out over time. There's no dents or dinks in the body - it's mint. It's the tripping lever sometimes releasing a touch prematurely, particularly with a very gentle trigger press.

"replace" is unfortunately not an option since we're in a zero spares environment
Come visit my YouTube project: https://www.youtube.com/channel/UC9k2WzcJ1kUMl4KIwNQwrFA

Bloke's mad minute tests are used as a reference in the following Youtube history channel episode. I'm not going to judge whether what he has to say is correct or not, I just thought it was interesting that Bloke was referenced as a source of data there. He provides links to Bloke's channel for the referenced data.

If anyone is wondering where he got the idea of making these calculations, I suspect it was inspired by Soviet doctrine, which placed a lot of emphasis on planning battles based on firepower per length of front (e.g. rounds per minute per 100m of front, etc.).

If Bloke notices a sudden inrush of Wehraboos in his comment section, be warned that Tik is an object of hate to the master(bating) race as he's not convinced that the Germans were really all that awesome.

For those who don't want to watch the whole video, the summary would be that the presenter puts forward the theory that differences in "national characteristics" in terms of how infantry from different countries fought in WWII may have to a large extent have been due to the type of weapons they brought into the war rather than anything to do with "race" or "culture".

He does address the issue that small arms firepower isn't everything, but he also says that it can't be ignored either.

Up with this sort of thing!

I see you've done a cameo in a Lindybeige video... must admit it does seem a bit more exciting than most agricultural shows I've been to.
"A politician is an arrse upon which everyone has sat, except a man."- e.e. cummings.

On a semi related note... I have just made up some indoor training ammunition for my Lebel using a lead ball and flashpaper a la Le Chap's video!*

Excellent results.. 1/2" groups at 15m and hitting to the 200m point of aim as predicted! The .324" cast balls were clearly stabilising and not stopping at the Linatex.. good splat on the plate and no spalling!

For those of you not aware of this.. this is the original French method of making indoor training ammunition using flashpaper as the propellant for a round lead ball. This neatly gets round the issue of double charging, detonation and powder getting lost in the case..

Bore a bit sooty, and needed a couple of passes with a wire brush mit solvent, otherwise fine.. no signs of leading etc! I coated the balls with Liquid Alox which may have contributed to the gunge in the barrel, but not really a source of concern..

Edited to add... I would be a bit careful what you shot these at.. I haven't had a chance to clock the balls to get the MV, but you need something a bit more than an airgun pellet catcher IMHO.. Le Chap was using a .22RF rated bullet catcher (.. or a particularly exotic cheese grater!) and I would suggest this is wise..

I would be very careful not to rely on a garage door providing sufficient stopping power for one of these!

Buy patches. Especially as one is trolling me!

stoatman said:
Buy patches. Especially as one is trolling me!

Are the crufflers still alive?
So long and thanks for all the laughs
https://280british.blogspot.com/

ugly said:
Are the crufflers still alive?
Click to expand...

You rang?
Charisma: The ability to convince without the use of Logic.
A founding member of the rapid car park construction (NI) association.
Bee Arrsed - Keep Bees
D1575 SCS5003 NSCR1561 SSC21

Moderator
I still have a folder full of cruffler articles I printed out at work
So long and thanks for all the laughs
https://280british.blogspot.com/

6,400 produced and found a harry spankers new one, nice!
NULL

Watching that it makes me wonder how much effort went into the design of the various angles that make the effectively 2 movement action so slick. As you demonstrated the cock on close spring isn't very wimpy, but the soldierly movement effectively ignores it.
"Informative" doesn't quite cut it, well done breaking down and explaining something you're doing by instinct, it's harder to do that than people would think.
I greatly enjoy Ian's videos, but as a southpaw watching him trying to work a Lee Enfield is a bit toe curling.
NULL

Tyk said:
I greatly enjoy Ian's videos, but as a southpaw watching him trying to work a Lee Enfield is a bit toe curling.
Click to expand...

Its the same with a lot of the US Enfield/"Mad Minute" vids; clunky and awkward weapon handling, and nowhere near the rifle's performance capability.
Share:
Share