Beaten up War Hero to be featured on Crimewatch tonight

BBC webpage
I'm not sure if this is in the appropriate forum, if so, my apologies and mods please move is this is the case. 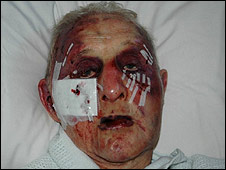 We all booked out the outrage bus when Bob Schofield was badly beaten during a robbery at his home back in November last year.
He served in the Andrew during WW2 and was on board an escort ship as part of the North Atlantic (Arctic) convoys, a test of a mans mettle if ever there was one.
Read what his son writes about him:

Peter King Salterforth Barnoldswick
My uncle Bob (Bob Schofield) served on HMS Impulsive on several Russian convoys, most notably PQ18. The conditions he describes are hardly believable. Icicles in the engine room, next to 3 boilers and 35,000 HP steam tubines. Having to hack ice off decks and rigging. Bob says the only thing that kept him going was the rum ration. I'm ever so proud of my uncle Bob. I would like to say a heart felt thanks to all you seamen who served on the Murmansk run.
Click to expand...

His case is being featured on Crimewatch tonight and I would ask that any happening to flick over to BBC1 at 21.00 tonight might want to stay and watch the reconstruction and appeal. You never know.
I'm not going to preach to you guys but I think Bob and his wife Mollie deserve our support and to at least take a look, we owe them that much at least.
ARRSE has enough members to maybe have someone who knows something about this and if it helps jog a memory then it will be worth posting it here.
Thanks for your time. I'll stop dusting now as its getting in my eyes.
**** it.

Just the one bump to keep this on the front page before Crimewatch tonight.

And to say that if you can't watch Crimewatch tonight then it will be available on BBC IPlayer later:

Bump, because I can not watch it as I am in Germany

Well, I hope for one if there is someone out there who does know the Shiyte that did this bubble them to the Cops or PM me their names and addresses, I'll happily arrange to have their doors kicked in.