Britain’s largest base in Helmand Province, Afghanistan, yesterday officially opened two state of the art CT scanners. They were launched by the Director General Army Medical Services, Major General Michael von Bertele QHS OBE L/RAMC, who said: “These scanners are the gold standard in trauma care. They allow the staff to accurately identify the injuries a patient has and then give them the right care as quickly as possible.”

The two new scanners and the new building which houses them form a contract worth £2.8m which was awarded to the contractors KBR in February as part of an Urgent Operational Requirement (UOR). The buildings are built to stringent NHS standards, including backup power, air conditioning and lighting. To have two of these machines dedicated to trauma care would be the envy of many NHS Hospitals. 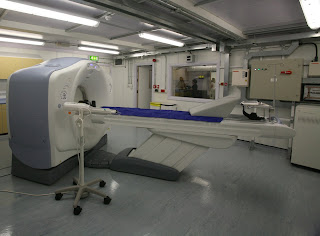 The scanners are General Electric 64-slice scanners, capable of over 10 times more detail than the existing equipment in only a fraction of the time. This means that casualties can be treated much faster. In addition, because there are two scanners, there is a natural redundancy should one go unserviceable due to the hostile environment that Afghanistan presents. The new scanners provide a more resilient capability that is more modern, reliable and better supported than that currently in service.

The scanners are used in a number of ways, from scans following head injuries to full vascular reviews following IED blasts. This allows the doctors to see any internal injuries prior to surgery. The greater definition provided by the new equipment will allow a much better and faster diagnosis of a patient than exists currently. 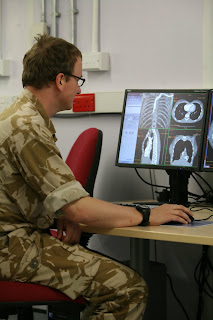 The hospital has two consultant radiologists who diagnose patients once the scans have taken place and five radiographers who run the machines. Surgeon Commander Richard Graham, a Royal Naval Reservist who usually works in Bath, is one of the radiologists. He explained the importance behind the new scanners: “These machines are a very important addition to the hospital which allow us to carry out much faster scans and reduce the time that a patient must wait before potentially life saving surgery. These scanners give us a much higher definition to work with and we can have a rough diagnosis within two minutes. Because this is the next generation of equipment the patient also receives a lower dose of radiation than previously and is therefore even safer to all involved.”

Question: were the scanners handed over to ANA or returned to store back here?

(Don't shoot me for asking, if you don't know just say so! Thanks)
'The really important fact about the English intelligentsia is their severance from the common culture of the country' George Orwell

uh-huh.....only askin' like.....I'll get me crisp packet....
'The really important fact about the English intelligentsia is their severance from the common culture of the country' George Orwell