Seven days in the life of a British soldier.

A very small book, just 60 pages in length, covering a week spent in rural south N Ireland, known to all who served there as ‘Bandid Country’ as the PIRA were very active there and the area was mainly Republican. The author served with the Royal Artillery leaving as a SSgt, this is a fictionalised account of a week spent on an observation patrol.

The story, background and ending will be well known to anyone who has been there and actually carried out an OP patrol over several days. Inserted a few miles away by helicopter then tab in to a hide to observe the target, which in this case is a cache with a sniper rifle inside. I must admit that the patrol were very brave (foolish?) when on finding the cache saw it was a buried milk churn they took the lid off the churn. Personally I think I would have called in the experts before touching it! Anyway, noting the contents and leaving well alone, they go back to base when they are tasked for a patrol to observe and see who picks up the weapon. 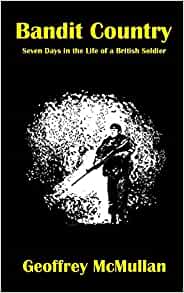 The author explains, quite graphically, how an OP works with four guys dug in and hidden for days on end, unable to heat food, go to the loo except into bags and bottles for disposal later – the buddy-buddy system often playing a part in ensuring nobody ‘missed’!

Tasked to watch but not intervene, the patrol sees the cache picked up and then after a while follow to see where they go, either over the border into S Ireland or picked up by vehicle in N Ireland. I will leave you to read about how this pans out.

The author explains a bit about tracking, which was a special interest of his, leading to his civilian job as a conservationist, especially helping disadvantaged children to take an interest in nature. He was one of the leads in setting up a nature reserve in Germany called Zachariassee, for which he received the BEM for service es to Anglo-German relations.

This is an interesting wee book, giving a snapshot on one of the tasks that so many carried out during Op BANNER. Personally I was lucky in that my tours were early and urban, not rural. The author has cleverly used the Glossary by numbering the item and using that number when used in the text of the story. This would certainly help those unfamiliar with the job.

I read this in one go, it is short after all, but it is a nice snapshot of life in N Ireland for many soldiers and Marines.

4 Mr MRHs for a well put together tale of one factor of life on Op BANNER.

Great review! I thoroughly enjoyed the book as well!
Vicky

After the Wall Came Down : Soldiering through the Transformation of the British Army, 1990-2020

Checkmate in Berlin by Giles Milton