The league as of today.

Mighty_Blighty said:
Still 2 weeks to go. Early days yet. I am on about version 349 of my team
Click to expand...

I'm in with my team, the Offenbach Cloggers. Eat my dust !

Teams as of today. Sept 5th.

Spank-it said:
Names with *Stars = Past Winners.
Click to expand...

*Thanks for that mate. No pressure then!
ARRSE Fantasy Football Champion 2018/19

Mighty_Blighty said:
*Thanks for that mate. No pressure then!
Click to expand...

I need to know these things so cheers for the info.

Confirmed.
As of the deadline.
39 Managers are now in a fight for their lives respect.

Here we go again,
GW1 shows The Iron forging ahead with a sweet 92 and a lead of 20 over 2nd place Blind Rovers. 11 other managers had decent 60+ scores as well which is not a bad sign. On the lower end it seems that quite a few people either missed the deadline and/or still had Man City & United players in their squad. GW2 will be the judge of whether that strategy will work out for the good or not. 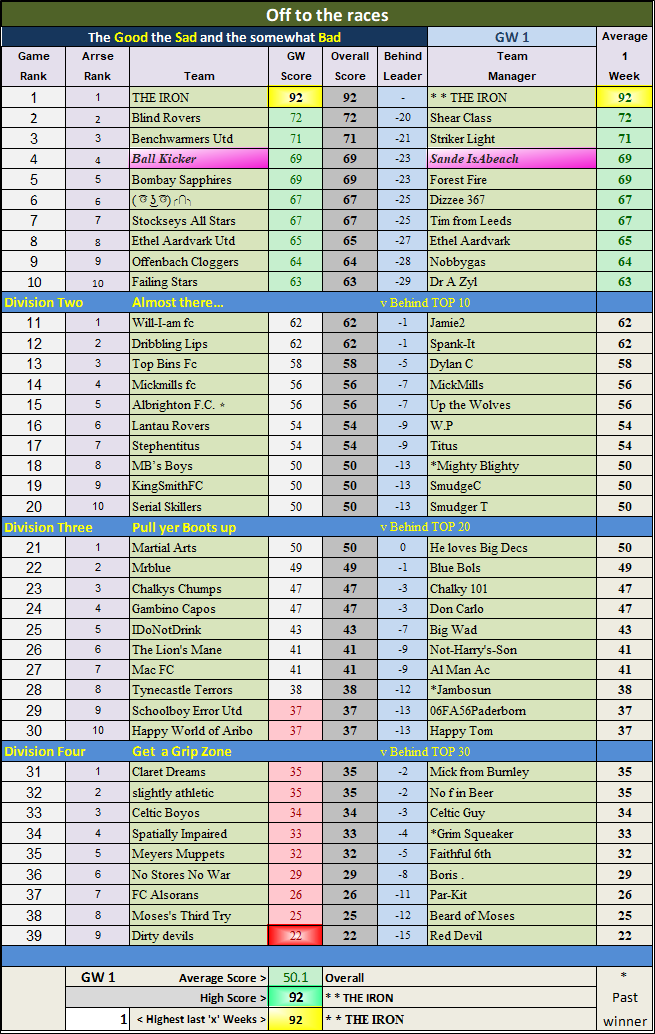 I'm working on the notification list. If you need your user name added or taken off let me know.

It was a week of if you had Salah as skipper or not!

I did, then changed him.

*MB wonders off muttering to himself the mong..
ARRSE Fantasy Football Champion 2018/19

Mighty_Blighty said:
It was a week of if you had Salah as skipper or not!

I did, then changed him.

*MB wonders off muttering to himself the mong..
Click to expand...

Convo Saturday morning between the wife and myself 2 hours before the deadline.

Wife: "Who should I Captain,KDB or Salah?"

Convo yesterday with the wife and SIL, a big Liverpool fan.

Wife: "Why didn't you have Salah as your Captain?"

SIL: "I forgot all about picking a Captain"

GW 2 the week of' Oh, if only I had Captained Spurs Son'. However, Beard of Moses did the 2nd best thing by sticking the Captains badge on Harry Kane and scooped the high score with a sweet 115, the Iron maintained his lead despite Dizzee throwing up a nice 105 and the overall average was slightly over 60 which is the highest I've seen over the last three years. 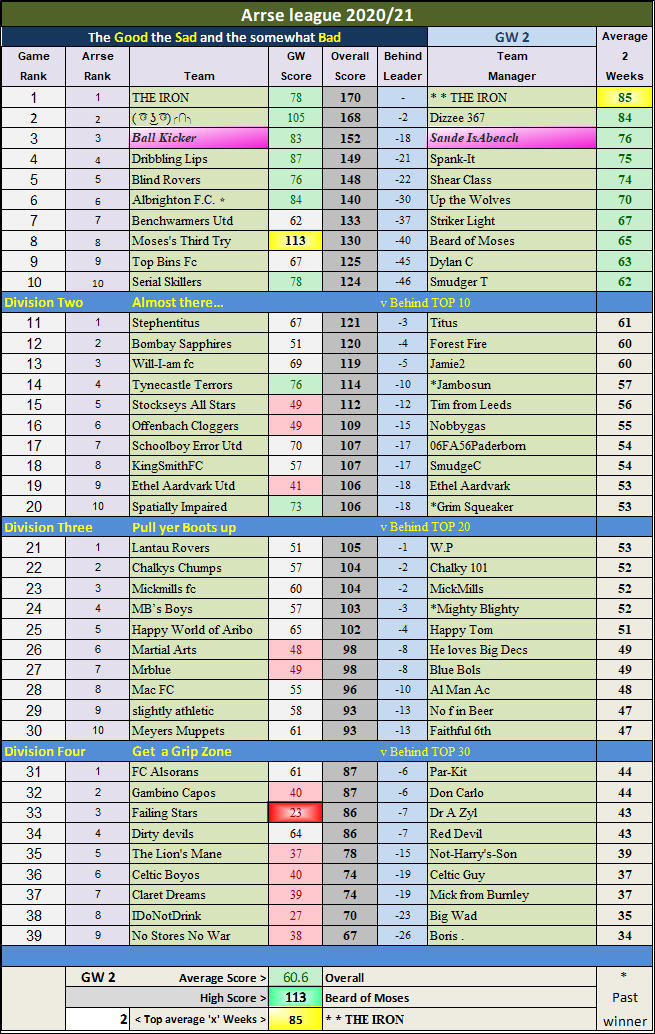 For the record I need to add a disclaimer.

I doubt anyone else is counting but the Arrse league table I post matches the data shown after the final FPL update....but:

The posted GW scores on the league website are totals before any transfer costs are deducted.
For example Dizzy's two weekly scores were 67 & 105 which add up to 172 but the total overall score is posted as 168 because of a 4 point transfer cost in GW 2 and this what my spreadsheet shows.

Basically it is the posted overall score that counts.

Why FPL does it this way I do not know but I have confirmed this oddity with the FPL support team and I feel the need to point this out to you the consumer.

One could argue that Dizzy would be in the lead if not for those 4 deducted points but Dizzy could argue if I hadn't transferred Kane in I could be sitting in 11th place not 2nd.

One could also say well fcuk me Spanky you claim to be the Excel genius so fix it, and I say fcuk off it is what it is.

I'm not happy. I'm having to re-jig my team, and I have one player who has been loaned out to a foreign club, meaning I have to waste a transfer to replace him.

Nobbygas said:
I'm not happy. I'm having to re-jig my team, and I have one player who has been loaned out to a foreign club, meaning I have to waste a transfer to replace him.
Click to expand...

I feel your pain. The following describes my start to the season "Week 2, Wildcard".
Barclays Fantasy Football 2017/18 ARRSE Champion