Cutaway said:
Another fine, upstanding defender of law and order. 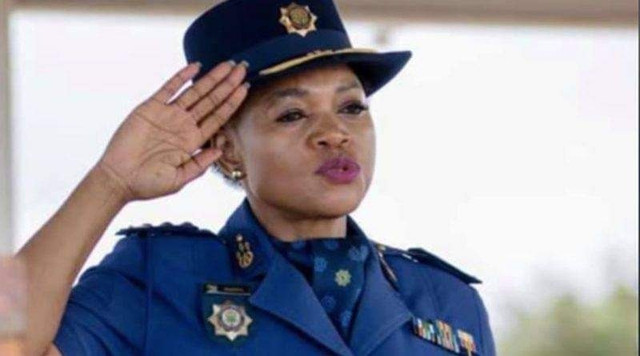 Lt Gen Bonang Christine Mgwenya, South Africa’s deputy national police commissioner – the most senior female officer in the land has been arrested for fraud, corruption and theft involving a mere R191-million* tender.
She was the keynote address the late Lt Col Kinnear's funeral.
(Charl Kinnear was leading the anti-gang unit in CTN.)

Now, how far and wide do you think the rot within the SAPS goes ?
The majority of these appointments are based on political connections versus true career, experienced police officers. This is the standard of senior leaders appointed within the SAPS - appointed strangely enough by the same party of which they're a member - then people wonder why SAPS is in the state it now finds itself.

Guess the only positive is that she was arrested along with some others, so does this mean things are maybe going to change, or as per history, just appoint another set of politically connected comrades who will do the same ?
Please don't give that question the dignity of a reply.

More likely that she was short changing her sponsors in the party. The way this works is that the lowest ranks have to give bribes to their skippers, and whatever government official sponsored them for their job). in order to retain their job, this means they have to be corrupt themselves. The skippers have to give bribes to their sponsors and Inspectors, etc, and this carries on all the way to the top.

In short, I doubt that this item is a sign of change.
This definition tells you all you need to know about 'PC'
PC, aka, Political Correctness, is a doctrine, fostered by a delusional, illogical minority (Liberals/Socialists) and promoted by the mainstream media, which holds forth the proposition that it is possible to pick up faeces by the clean end.
C

Piekey said:
New Racist's ruining it more than the last Racist's did?
Where ever did they learn that from?
Click to expand...

You mistake racism for tribal- and cronyism.


Piekey said:
Seriously now,get out.Get out and far away,don't read the news about SA or try to think about it.Its Fcuked,you know it,I know it and they know it too.Bleating on here does you no good,
Click to expand...

Where were you born and where do you live ?


Piekey said:
there is nothing worse than listening to a Saffy moan about "ow the bleks farrked eet all up my bruu,I tune you not".
Click to expand...

There is.
Someone going on about a subject of which they know very little.
Especially when they make a poor attempt to lampoon a minority accent.
Making fun of certain groups can get one into trouble in the UK - and the Arab world.
"And Darkness and Decay and Covid held illimitable dominion over all."
C.A. Poe.
P

Cutaway said:
You mistake racism for tribal- and cronyism.


Where were you born and where do you live ?


There is.
Someone going on about a subject of which they know very little.
Especially when they make a poor attempt to lampoon a minority accent.
Making fun of certain groups can get one into trouble in the UK - and the Arab world.
Click to expand...

I was born in Rhodesia,lived in Cape town untill seven years of age before my parents moved to the states.

Now I live between Alaska and Texas.

I thank God my folks had the foresight to see where it was all heading.

Seven? Have you offered your services to the state department as a regional expert?
"Justice tastes like hairy Bovril!" - The Righteous RTFQ

Lardbeast said:
Seven? Have you offered your services to the state department as a regional expert?
Click to expand...

I did.
I was rejected for living in the now.

On ROPs
Un-fcukig-believable.
Copper, pissed up and unable to stand, still has his service weapon on him...

Kit Reviewer
After eight models were raped near Krugersdorp, Cyril bemoans the effect it may have on the economy, while Brig Brenda Muridili of the SAPS gained another medal in stating the obvious by informing the press that the police, "are investigating a case of rape and armed robbery after the women were allegedly raped and robbed."

Ramaphosa also mentioned that the Twat in the Hat Cele had already been to the crime scene, although it was not specified whether his presence there was during, or after the commission of the crimes. 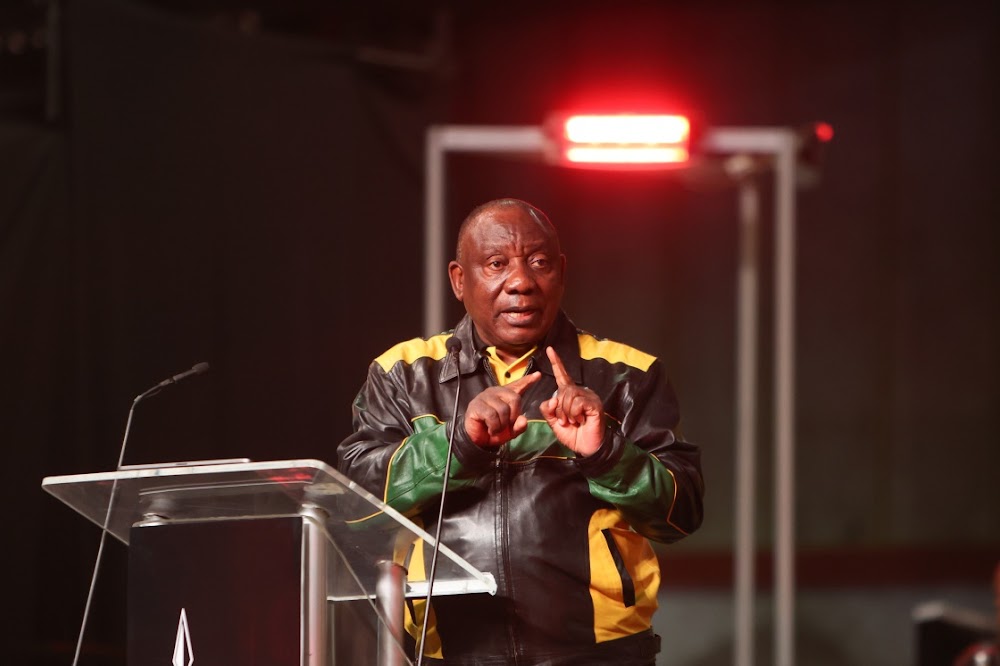 President Cyril Ramaphosa has ordered police minister Bheki Cele to ensure that the men who gang-raped eight models while they were filming a music video in Krugersdorp's West Village are apprehended.

www.google.com
"And Darkness and Decay and Covid held illimitable dominion over all."
C.A. Poe.
C 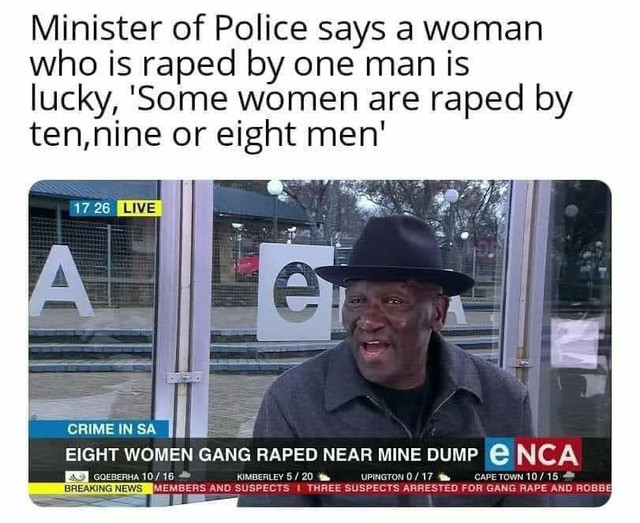 "And Darkness and Decay and Covid held illimitable dominion over all."
C.A. Poe.

Piekey said:
I did.
I was rejected for living in the now.
Click to expand...

The now? Is that what they're calling delusions of adequacy these days?

We know Cele is a bit speshul. It's a shame the ones who appointed him and those who keep them in power are no better. Until the continent gets over the tribal mindset and places in charge those who put country before tribe/party, there's no chance of redemption.
Last edited: 4 Aug 2022
"Justice tastes like hairy Bovril!" - The Righteous RTFQ

He needs to go.
"And Darkness and Decay and Covid held illimitable dominion over all."
C.A. Poe.

Sideways movement to another seat at the gravy trough is not fixing the problems inherent in the whole sick and poisoned edifice. Like the Muscovy mindset, it requires the total eradication of the players and their entire claque before there's any chance of improvement. They learned well from their russian mentors.
"Justice tastes like hairy Bovril!" - The Righteous RTFQ

He belongs in a fuckin straitjacket.
C

baboon6 said:
He belongs in a fuckin straitjacket.
Click to expand...

I'd have voted for a wooden box.
"And Darkness and Decay and Covid held illimitable dominion over all."
C.A. Poe.

Cutaway said:
You all heart.

I'd have voted for a wooden box.
Click to expand...

Which ribbon for MiD cluster?
2