Died on the battlefield in the Republic of Vietnam on 7 November 1967, while serving with Company C, 26th Infantry Regiment, 1st Infantry Division. Posthumously awarded his 4th Silver Star on a "Search and Destroy mission" near Loc Ninh. Pascal Cleatus Poolaw Sr. is

Poolaw a full blooded Kiowa, was born on January 22, 1922 in Apache, Oklahoma. Poolaw served in World War II, the Korean War, and the Vietnam War.

In 1942, Poolaw, his father, and his two brothers joined the armed forces. While serving with the 8th Infantry Regiment’s M Company near Recogne, Belgium on September 8, 1944, he earned his first Purple Heart and Silver Star. On that day, Poolaw’s unit was engaging fire with the Germans. He pushed his company forward while facing heavy machine gun fire for five minutes as he hurled hand grenades, causing numerous enemy casualties. According to his Silver Star citation, “Due to Sergeant Poolaw’s actions, many of his comrades’ lives were saved and the company was able to continue the attack and capture strongly defended enemy positions. Sergeant Poolaw’s display of courage, aggressive spirit and complete disregard for personal safety are in keeping with the highest traditions of the military service.”

Poolaw’s military career did not end in Belgium or with the Germans. During the Korean War, Poolaw saw combat and was wounded again and awarded the Distinguished Service Cross, a second Purple Heart and two more Silver Stars. His first Silver Star for that war was for his heroic actions on September 1950 when his company met stiff enemy resistance. Poolaw volunteered to lead his squad in an assault, charging up a slope to hit the perimeter of the North Korean’s position. His squad engaged in fierce hand-to-hand combat and Poolaw’s persistence encouraged his squad to keep going until they were able to seize their objective.

The second Silver Star during this war came on April 4, 1951 near Chongong-ni where Poolaw and his platoon was pinned down by automatic weapons and a mortar barrage. He exposed himself to the enemy and slowly advanced across the open terrain, firing his weapon as he went. By keeping the North Koreans’ eyes on him, his platoon maneuvered to a better position and were able to carry on the mission at hand.

He returned to the U.S. in 1952 and retired from the Army ten years later. This is not where is story – or military career – ends.

During the Vietnam War, all four of the Poolaws sons were in the military. In February 1967, his son, Pascal Jr., was injured by a landmine in Vietnam. This injury resulted in amputation of his right leg below the knee. Poolaw’s youngest son, Lindy, was drafted. Afraid of what could happen to his sons as the war progressed, Poolaw rejoined the Army at the age of 45. Giving up his rank as a 2nd Lieutenant (a promotion he earned in Korea), with the intentions of serving in direct combat, Poolaw hoped to keep his youngest son away from the front lines by taking his place. Regulations prohibited two members of the same family from serving in combat at the same time without their consent. Unfortunately, by the time he arrived on the West Coast, Lindy had left for Vietnam the day before.

Poolaw was deployed on May 31, 1967 as a first sergeant of the 26th Infantry Regiment’s C Company. His last Silver Star was for an event that occurred a few months later. On November 7, 1967, Poolaw’s unit were part of a search and destroy mission near the village of Loc Ninh. Their unit was ambushed by a Viet Cong force with intensive claymore mine, rocket, small arms, and automatic weapons fire. Through a hail of bullets, Poolaw raced to the lead squad position to lay down a base of fire – saving countless lives. While wounded, he continued moving among his squad making sure everyone was positioned properly while pulling casualties back.

As Poolaw was carrying a wounded soldier to safety, he was struck by a rocket propelled grenade and killed. For his heroic actions Poolaw was awarded a Silver Star and a third Purple Heart posthumously. “He has followed the trail of the great chiefs,” his wife Irene said at Poolaw’s funeral. “His people hold him in honor and highest esteem. He has given his life for the people and the country he loved so much.” 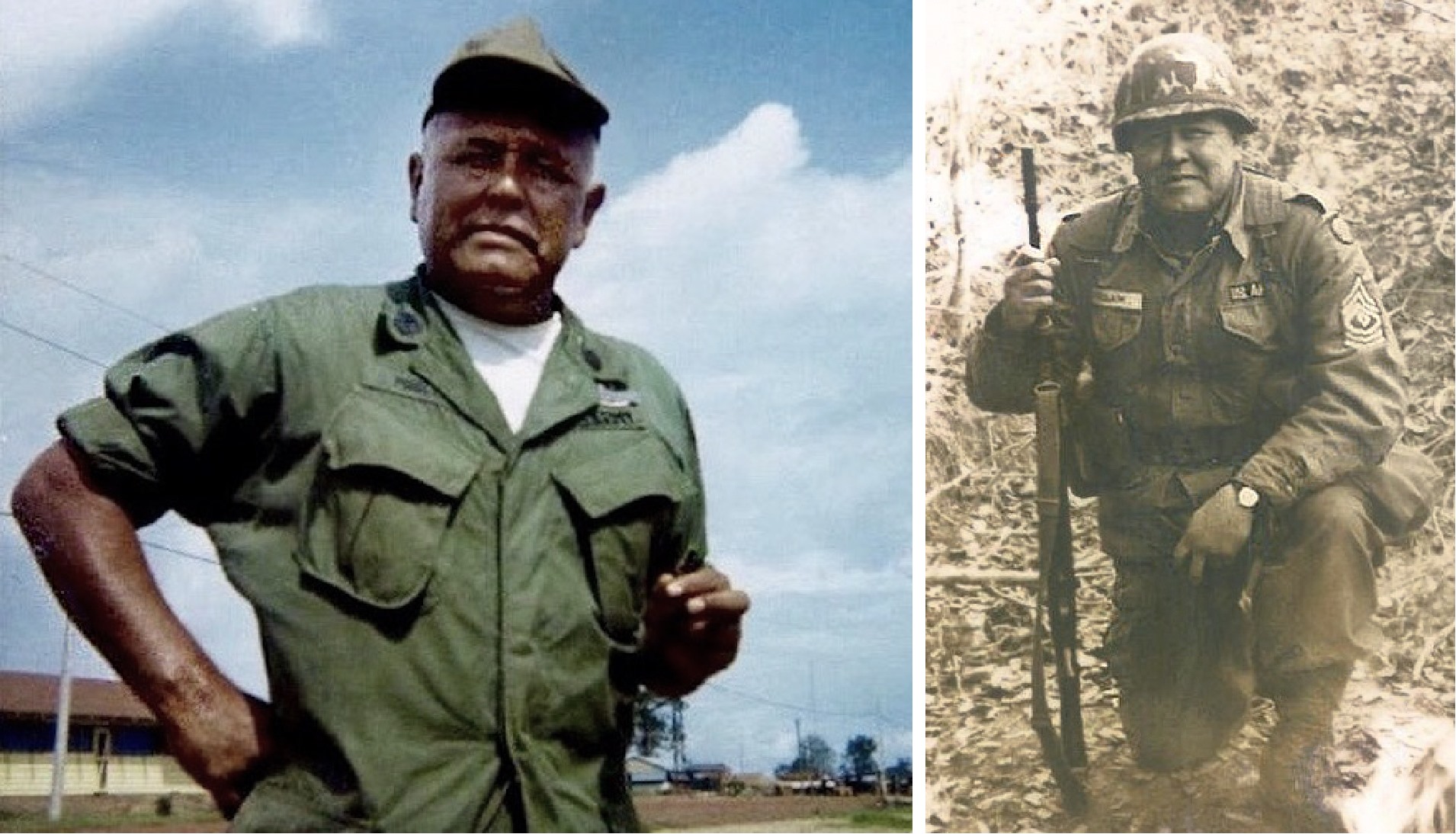 “The President of the United States of America, authorized by Act of Congress, July 8, 1918 (amended by act of July 25, 1963), takes pride in presenting a Third Bronze Oak Leaf Cluster in lieu of a Fourth Award of the Silver Star (Posthumously) to First Sergeant Pascal Cleatus Poolaw (ASN: 18131087), United States Army, for gallantry in action against a hostile force in the Republic of Vietnam on 7 November 1967, while serving with Company C, 26th Infantry Regiment, 1st Infantry Division. On this date, during Operation SHENANDOAH II, First Sergeant Poolaw was accompanying his unit on a two-company search and destroy mission near Loc Ninh. As the patrol was moving through a rubber plantation, they were subjected to sniper fire. Within minutes, the area was raked with intensive claymore mine, rocket, small arms, and automatic weapons fire from a numerically superior Viet Cong force.

First Sergeant Poolaw unhesitatingly ran to the lead squad which was receiving the brunt of the enemy fire. With complete disregard for his personal safety, he exposed himself to assist in deploying the men and establishing an effective base of fire. Although wounded, he continued to move about the area encouraging his men and pulling casualties to cover. He was assisting a wounded man to safety when he was mortally wounded by Viet Cong fire.

His dynamic leadership and exemplary courage contributed significantly to the successful deployment of the lead squad and undoubtedly saved the lives of many of his fellow soldiers. First Sergeant Poolaw’s unquestionable valor in close combat against numerically superior hostile forces is in keeping with the finest traditions of the military service and reflects great credit upon himself, the 1st Infantry Division, and the United States Army. It should be noted that in the ferocious fighting at the Battle of Loc Ninh where he earned his 4th Silver Star and 3rd Purple Heart, it also resulted in the awards of 1 Medal of Honor, 2 Distinguished Service Crosses and one other Silver Star. 14 other US Army soldiers also lost their lives in that engagement.”

He should have got The Medal of Honour to add to all the others. A brave warror in the truest sense of the world.

That's a brave man, it's folk like him that give actual meaning to heroism.
NULL

par avion said:
He should have got The Medal of Honour to add to all the others. A brave warror in the truest sense of the world.
Click to expand...

He may well get the award. There have been a few gallantry medals upgraded to the Medal of Honor in recent history.
If something doesn't fit in a hole, then one should stomp, stomp, stompity stomp on it until
it does, then walk away whistling "Spanish Harlem"

Very brave man. But out of curiosity he signed up again to save his son Lindy from combat in Vietnam. Does anyone know if he got through?

Dwarf said:
Very brave man. But out of curiosity he signed up again to save his son Lindy from combat in Vietnam. Does anyone know if he got through?

Ed. Gottim. Died aged 20 1968 in Germany with the military.
Ironic that he got through Vietnam only to have an accident (probably) in Germany.
Click to expand...

Run over by a car at Wildflecken training area
Proud member ARRSE Vermin as per Pants'O'Flame, the turps drinking rough sleeper pigeon rapist