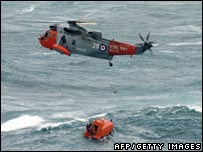 Royal Navy rescuers who saved 26 men from a life-raft after they abandoned their ship have described the conditions they endured as horrific.

Crewmembers from the MSC Napoli were rescued by helicopters from RNAS Culdrose after the ship was holed in storms 50 miles (80km) off Cornwall.

Giant waves crashed above the helicopters as wind and spray lashed the rescuers and the sailors.

One helicopter broke two lines trying to get a winch line to the raft.

The seamen were suffering extreme seasickness and hypothermia by the time they were hauled to safety.

The container ship was en-route when it sent out a distress call at about 1030 GMT on Thursday.

When they arrived on scene, the helicopter crews knew they were in for a tough operation.

The sailors were brought onto the aircraft individually after a diver, Petty Officer Jay O'Donnell, was lowered to the raft.

PO O'Donnell, 33, from Camborne, said: "The conditions were quite horrific when we got on scene.

"The life-raft was really rolling; and we had low visibility, low clouds and it was very stormy.

"The first aircraft broke two lines trying to get communications with the raft.

"The second aircraft got me down to it in the water in full diving kit.

"I got on board to assess the situation and check casualties."

He then spent 90 minutes securing each of the crewmen to a line so they could be winched to the helicopters.

He said: "They had only been there for a few hours, but they were in quite a bad way.

"They were quite shocked and suffering from hypothermia, extreme vomiting and sea-sickness."

The crew included two British cadets, plus seamen from Bulgaria, Ukraine, Turkey, India and the Philippines.

Despite the life-raft being able to hold 32 people, the freighter's crew said they still endured cramped conditions.

British deck cadet Nicholas Colbourn, 20, from the Scottish Highlands, said: "There was not much space at all, no leg room and we were cramped like sardines.

"The conditions were quite actually hot in there because we all had immersion suits on. It was pretty awkward and not very nice."

He said: "We were hovering 40 to 60 feet throughout it and some of the waves were actually coming above the helicopter.

"So we were going up and down with the waves and, unfortunately, occasionally the life-raft would go down while the helicopter was going up, making the winching extremely difficult. It was very, very rough."

The vessel is now under tow. British and French authorities are debating where the ship should be taken to.
Story from BBC NEWS:
http://news.bbc.co.uk/go/pr/fr/-/1/hi/england/cornwall/6278295.stm


Hats off to PO O'Donnell - takes some balls to do that job. I suppose it helps when your pilot is Chuck Norris!
Seriously good flying mind!

Well done all round.
It's time for British Independence.
R

Lt Guy 'Chuck' Norris is a very senior observer, not a pilot. Ex Stab's link refers to him as a helo CO. Unlikely if his pilot was the Lieutenant Commander, possibly if his pilot was junior in the rank of Lieutenant/Captain RM (I don't know the rules but I'd imagine the pilot is i/c even if an Admiral is the observer.)

The other pilot as far as I can gather from the BBC report, knowing who the guy is (as opposed to knowing him) and a film of the mustered rescuers is an RM Captain, Damien May.

Annoying to see Petty Officer O'Donnell (BZ) being reduced in rate to 'Aircrewman' in the MoD article. What chance have we got of raising public awareness and understanding of the Armed Forces if the MoD press office can't get it right?

Edited to chuck in praise for all concerned.
R

Ahhh, understood. I was wondering what parent could possibly be cruel enough to name their child Chuck. Especially with that surname.

I forgot to mention in my last post - Outstanding bravery on the part of the crew, particularly PO O'Donnell. I don't like being winched to the nice flat ground in calm weather!

"As we moved slowly through the outskirts of the town we passed row after row of little grey slum houses running at right angles to the embankment. At the back of one of the houses a young woman was kneeling on the stones, poking a stick up the leaden waste-pipe which ran from the sink inside and which I suppose was blocked. I had time to see everything about her - her sacking apron, her clumsy clogs, her arms reddened by the cold. She looked up as the train passed, and I was almost near enough to catch her eye." Orwell, The Road to Wigan Pier

Canadian Helicopter Down off Greece
2 3

W
Mountain Rescue - and how to task it.