QRK2 said:
Somewhere out there there is a long history of it but I cannot find it with a quick search. However when the AAC was reformed they initially intended to wear the same beret they had in the Second War, however the Parachute Regiment (which was of course a constituent of the Mark 1 AAC) blocked this and thus the present colour was chosen.
Click to expand...

The irony there being that the Parachute Regiment was initially part of the AAC and badged as such.
NULL

Harry Clampers said:
T'was a choice of Oxford Blue or Cambridge Blue. A demo was arranged whereby one beret of each colour was first dumped in a pool of engine oil, followed by a quick dunk in petrol, the idea being which one cleaned-up more easily. The chap doing the demo cheated by having a ringer in his back pocket, and we've worn the colours of his university ever since.

The reason all ranks wear a beret was partly because the aircraft of the day were a bit limited on HP, so the less weight we tried lugging-around the better, and partly because an SD hat in Blue makes the wearer look like an Italian traffic-warden, although, as has been alluded-to earlier, a model in Oxford Blue with a Cambridge Blue lid was trialled by one enterprising Officer, (Pople?) who was soundly laughed out of the Mess for his efforts.

^This^ plus I think the reason the puffy powder blue one was chosen was because it was the alma mater of the officer who made the decision.

I understand that more than one twat hat was procured, Pople was the only one brave enough egotistic to actually wear it. He wore it to a function that included several officers of senior rank to him who all, rightly, laughed at him it. A few years ago someone told me they have another in their possession, but I'm facked if I can remember who it is. The DAAC at the time took one look at it and said, 'No. Next item'.
"Alright, they're on our left, they're on our right, they're in front of us, they're behind us...they can't get away this time."

AlienFTM said:
So Teeny Weeny Airways do actually have a No 1 Dress hat?! Something new every day etc.

I always thought Harry Wales wearing a TWA beret with dress uniform at (his? His brother's? Someone else's?) a wedding looked crass. Choosing to wear what you want? Bad.

Said the man who upstaged Zero Alpha at her wedding by wearing Adam Ant kit. But, with Best Man, looked at the cord that holds the busby in the event of it being knocked off in the charge, decided that since we wouldn't be wearing busbies for more than a couple of minutes, went "meh" and agreed to leave them off.
Click to expand...

Harry was still correct, the questionable SD hat shown above was a one off having been made up on the request of the bloke under it who, I believe, was hoping to have it adopted by the Army Air Corps as part of the uniform for officers.

edit - I sit corrected by @CrashTestDummy about the number of hats produced.
"While being servant of oligarchs, being a head of thieving Russian 'elites', mr.Putin surely is not a gay."

Why did I instantly think of a fat chap called Hermann...?
He will be asking for a squadron of Spitfires, next.

wasteofrations2 said:
Why did I instantly think of a fat chap called Hermann...?
Click to expand...

If we'd gone with a Cambridge Blue Drinking Suit rather than the issue spud-sack I might have agreed with you....
"No set of mutually inconsistent observations can exist for which some human intellect cannot conceive a coherent explanation, however complicated."

WulfricSpot said:
The irony there being that the Parachute Regiment was initially part of the AAC and badged as such.
Click to expand...

That was part of the point that I was trying to make. The history which I have still failed to find (I think it was associated with the 50th anniversary) makes it clear that there was considerable ill feeling amongst the founding members of AAC Mark 2 over this (in particular some of whom who were ex GPR). The author goes on to tell of a conversation with a Cav CO in, I'm guessing early '60s, who stated the he would not allow any of his subalterns to apply for an attachment if they were required to wear such a 'camp' (I'm not sure of the actual term used) headdress. His description of what said CO was wearing on his head when he made this statement was rather amusing IIRC.
Last edited: 15 May 2020

Courtesy of Wiki - "A popular story is that the maroon colour was chosen by Major-General Frederick Browning, after his wife, Daphne du Maurier, suggested that he use the colour which made up part of his horse racing colours. However, in a letter, now in the British Airborne Assault Archive, she wrote that it was untrue."
"It's not the bullet that's got my name on it that concerns me; it's all them other ones flyin' around marked 'To Whom It May Concern.'" -Unknown
People sleep peaceably in their beds at night only because rough men stand ready to do violence on their behalf - George Orwell
Si vis pacem, para bellum

Did he take the MOD to an Employment Tribunal?
O

par avion said:
Did he take the MOD to an Employment Tribunal?
Click to expand...

I dunno why he felt the need to make that hat! If he was so keen on a peak then why not a neutral colour with a blue band?

otbc said:
I dunno why he felt the need to make that hat! If he was so keen on a peak then why not a neutral colour with a blue band?
Click to expand...

CrashTestDummy said:
Because he's a massive, attention-seeking ****?
Click to expand...

Looks like he got all the attention he wanted in all the wrong places...

Looks no worse than most cavalry headgear TBH.

When I went through Wallop in ‘77 the Commandant AAC (Badger?) wore that on Wings Parades. We were told it was a trial, thank fück it was found guilty. 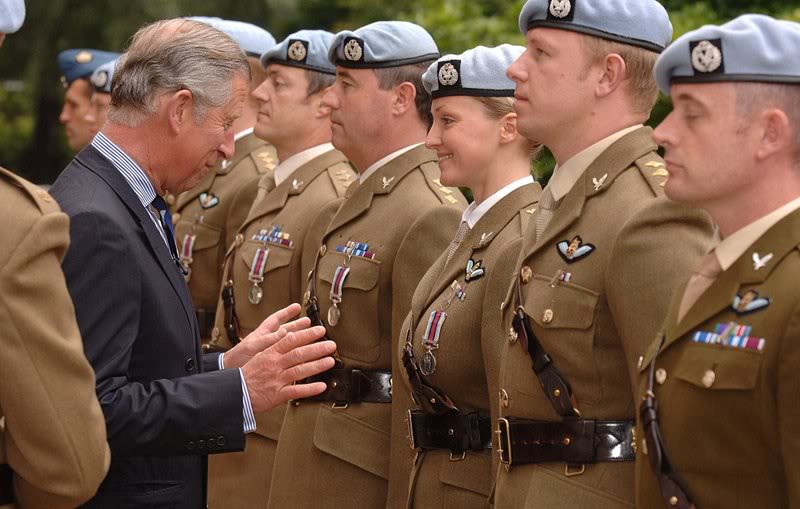 Does one medal constitute a rack?

I have seen that photo loads of times, but today is the first time I’ve noticed there is an RAF chap there too.............must have been the talk of thunderbird hats.
184461 said:
'It's called need to know/circle of knowledge for a reason BTW'
He isn't in the circle, he should NOT be told anything!
When trolls tell us Novichock kills in seconds they don’t mention Andrei Zheleznyakov. He was exposed, lived for ages and the soviets documented the whole thing,
S

The members of the AOP squadrons wore their normal regimental headdress, predominantly RA, but those members who belonged to the Glider Pilot Regiment wore the maroon beret and the Glider Pilot cap badge.
This carried over for about a year after the present Army Air Corps came into being until the blue beret was adopted.
The Glider Pilot Regiment continued to exist after the war right up until the new corps was formed in 1957, Many were re-trained as second pilots on Hastings and York aircraft and served in the Berlin Airlift and others as light aircraft pilots.
The photos below are from the time of the (re)formation of the AAC in 1957
Interesting to note the different wings, the RA ones having the Ubique 'bomb'
1. Major L.J. Wheeler DFC, OC 656 Sqn Army Air Corps
2. Capt R Staveley, Flight Commander, 656 Sqn Army Air Corps
3. SSM T. Pearce who had piloted a glider on D-Day and Arnhem. 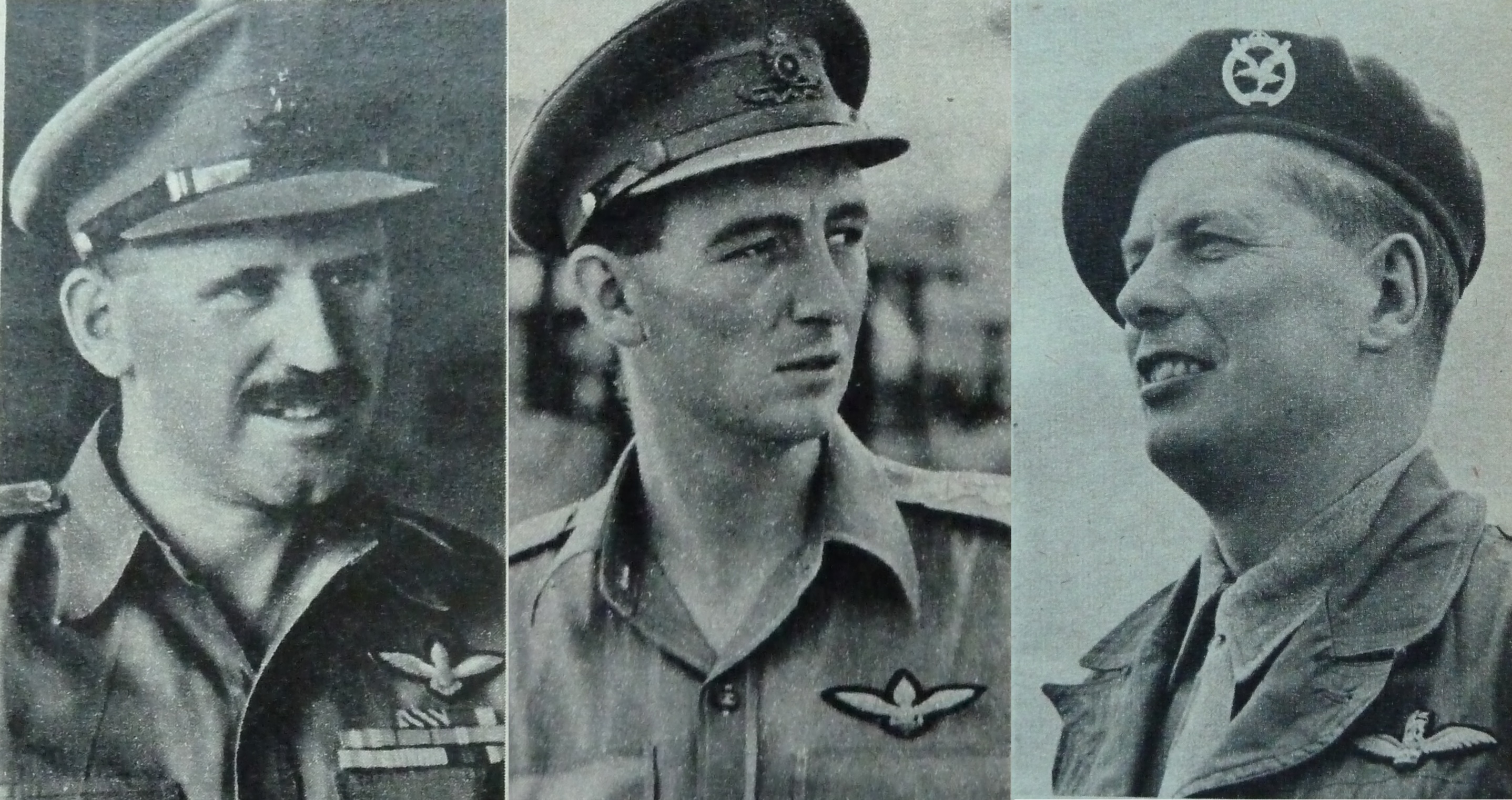 Slime said:
I have seen that photo loads of times, but today is the first time I’ve noticed there is an RAF chap there too... must have been the talk of thunderbird hats.
Click to expand...

If they should once obtain a connivance, they will press for a toleration, from thence to an equality, from an equality to a superiority, from a superiority to an extirpation of all contrary religions. John Pym 1584-1643.
You must log in or register to reply here.