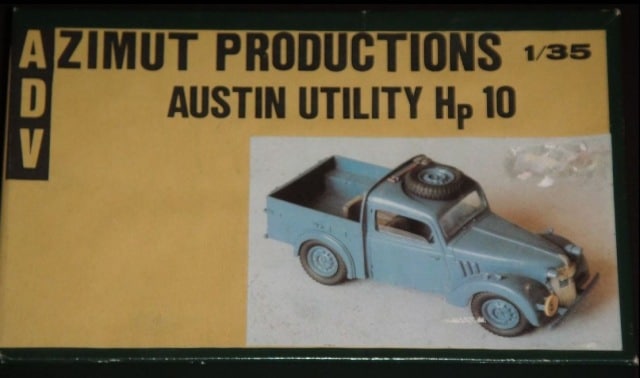 The Austin 10 Utility Truck (better known as Austin Tilly) is actually the military version of the Austin 10 saloon. The chassis is the same size and it uses a "platform" construction that is the result of welding a pressed-steel floor to a frame, which results in great diagonal stiffness. The Austin Tilly has a few changes in comparison to the civilian Austin 10 – the motor has more power, a water pump is added, a bigger fuel tank and the use of "cross-country" tyres. About 30.000 vehicles were built.

The Austin Tilly was a typical British wartime improvisation: the conversion of a standard saloon car into a Light Utility Pick-Up Truck. Austin were not the only manufacturer of Light Utility vehicles for the British Army: Hillman, Morris and Standard all produced militarized pick-ups from versions of their own cars. Soldiers called them affectionately by the nickname “Tilly.” The Tilly served throughout the war in many theatres of operation, and even soldiered on afterwards well into the 50s, though sadly few have survived.

ADV/Azimut Productions are a French company, based in Paris. They deal mainly in mixed-media models, usually resin and white metal. Their kits are no frills, basic models with limited instructions, no painting plan and no decals. They come in plain boxes with a simple photo overprinted with the company logo. Take care if ordering from these people, they are well known for "forgetting orders" or "losing items in the post"! You're better off ordering from BNA Model World, at least you'll get your kit.

The Austin "Tilly" kit contains 46 resin parts and 11 white metal pieces. Only the wheels are in a baggie, the remaining parts roll about in the box with no protection. The kit certainly hasn't been cleaned. The amount of flash and mould lines are unbelievable! Care needs to be taken when cleaning flash and mould lines from this model as the resin used is particularly brittle and snaps very easily. I always recommend a wash in mild detergent prior to assembly.

The model is moulded in a light desert sand coloured resin, although some parts are in a strange Olive-Green, giving the impression that parts have been added from another kit. There is no canvas tilt supplied with the kit. My own thoughts would be, to make up some wire framing and then putting tissue paper soaked in PVA over it. Once the tissue is dry, trim up the edges and add some scaled in grommets and rope. Alternatively, find a plastic tilt in the spare parts box and alter it to size and shape.

The instructions are fairly basic and written predominantly in French! They are four A5 sheets printed onto a landscape view A4 sheet. There are two black and white photos on the instructions, barely worthy of a second look. The instructions themselves are a collection of line drawings with arrows pointing towards locations. Most of the build is common sense and the instructions are only referred to when fixing the front wheel assemblies.

Overall, I am not impressed with this kit. Considering the cost (£35:00) there are far better models out there for a lot less money. The Tamiya kit of the same model is far more detailed, better made and a lot sturdier. This kit has a feeling of delicacy about it that didn't exist on the actual vehicle. There are so many things that could have been better about this kit, better moulding, better instructions, better paint plans and some decals. A figure would also have helped.

I can't give this kit a rating as I can't think of anything good to say about it.

Smeggers
All mushrooms are edible, some however, only once!