On a local news programme (Look North) an article was transmitted about an AA platform similar to Sealand which was in the North Sea of Hull.

While I am afraid that I know nothing about a sea fort in the Hull area, the forts were designed by Guy Maunsell. I do have a vague recollection that a Hull fort was planned but never built. There's quite a strong possibility that I'm wrong there though. There's the remains of three army forts in the Thames estuary, each comprising seven towers interconnected by walkways above the sea laid out in the pattern of an anti-aircraft gun position on land. One forrt, Nore Fort has been removed. Shivering Sands and Red Sands Forts still survive and a great effort is going into restoring Red Sands. There was also an identical fort on the Mersey estuary, but that was removed after the war. Sealand is an example of Navy forts, and they were floated out fully equipped and armed with the crews on board and then sunk in position. They too were designed by Maunsell. If my aging memory is correct, they were all built at Gravesend.

Can I suggest you take a look at http://www.project-redsand.com/ as that is the website for the project to restore Red Sands Fort. There's lots of links. Also a discussion forum - if you post questions you will get answers!

Try googling with words like Maunsell, Red Sands, Shivering Sands, Tongue Fort... There was also a lot of pirate radio station activity in the sixties, and you'll find lots of stuff if you try looking at Bob LeRoi's website at http://www.bobleroi.co.uk/Home/Home.html

Book Reviewer
Try searching scuba diving forums or contact local dive clubs. they will know about the sites.
http://www.nbpa.co.uk/ The true voice of The Meninblack

There are two forts in the Humber.


I don't know if they were AA platforms, seem ideal though. My Great Uncle was in Artillary in the second world war and was based on the Humber but he never spoke of his time there. Talked endlessly about india and fuzzywuzzys but never a word about the humber

Just found a couple of pics of the fort built in the Mersey - the only pictures I've ever seen of that fort:

Still looking for one in the Hull area, no luck so far.
Adrian

Pssst its behind you !!! 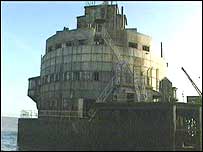 've just found out that plans for seaforts in the north were abandoned,

However, as polar69 suggests, the Humber forts could well have mounted AA guns. Something else to research...

Also, the Mersey fort never fired a shot in anger, but the various Thames forts were rather busy, shooting down 21 aircraft, more than 30 V1 flying bombs, and also accounting for one U-boat and one E-boat.
Adrian

I don't think its mentioned in this book

but it is useful background reading. The fort would have been manned by 2nd Anti Aircraft Division (which was formed by the conversion of many territorial infantry Bns in 46, 49 and 50 Divisions areas to AA duties, 46 Division was disbanded because of this)


"The two forts were built during the first world war, Haile Fort being on the Lincolnshire coast two miles downstream from Cleethorpes, and Bull Fort on a sandbank in the middle of the river, in a southwesterly direction from Spurn Lighthouse on the northern bank of the river.

Together with the fortifications on Spurn Point, their object was to make the estuary into a safe assembly point for coastal convoys.

Their construction took over three years, hundred of massive blocks of concrete being sunk into the sand to form a firm foundation on which the superstructure of the forts could be built.

Each of the forts cost over one million pounds, and were regarded as 'an outstanding triumph of modern engineering'.

The Bull Fort was the most difficult proposition and was built circular on interlocking steel piles in the form of caissons, and thee connected by further piling, giving a cell-like effect on plan. The outer compartments were filled with concrete and the round inner one with sand, the hole being capped with concrete, giving the impression of a huge bucket of steel and concrete enclosing a great cylinder of sand. From this the floors were built.

The garrison consisted of 200 men and their officers, and provided all necessary amenities.

The Haile Sand Fort is on a slightly smaller scale although similar in design.

Both forts were manned by the army during the last war and were continually attacked by enemy aircraft and U boats.

In 1956 the army left the forts and several ideas were put forward as to their possible future use. One suggestion was that the Bull Fort could be used by the pilots who were on duty in the river, rather than having to live on board the pilot cutter, which could be very uncomfortable in rough weather. Another suggestion was that if nature eroded another quarter of a mile off Spurn Point, Bull Fort would be outside the three mile limit and could be turned into a duty free drinkers paradise!

The forts were manned by civilians until the early sixties, when the Humber Conservancy Board became the owners. Bull Fort is used as a navigational aid and has a huge bell at the top which is automatically rung by a gas pressure hammer. Apart from that and the lights on board, there is an automatic tide guage which tells ships' masters the state of the tide and whether they will have enough clearance to get up the river."


I am just wondering what a U-boat would been hoping to achieve! This site shows that the forts were manned by the army during WW2.
Adrian

Sven
check this site out - it covers the whole fort system and is full of human interest, light and colour.

http://www.bobleroi.co.uk/ScrapBook/CityReunion/FortFanatics.html
They used to say if an infinite number of chimps typed we would get the works of Shakespeare, the internet has proved this is NOT the case...

It is up for sale at the moment... Sealand, as it is now known, or HM Fort Roughs as it was known. It is outside territorial waters and so was outside the jurisdiction of the UK. Hence its rather colourful history. Roy Bates is the guy who took ownership and his son "Prince" Michael is now selling it. I think it is a nice little earner as an internet link - being outside any jurisdiction.
Adrian

This is worth a look, includes an old video clip:

Sven, if your travels ever bring you down to the south, you might like to consider a trip out to the forts to see them up close. Take a look at

They also go out to the Navy Forts on some trips.

Also, there's quite a few pictures on the Flickr site. Just search for Maunsell Fort.

http://www.flickr.com/photos/completeoutdoors/70965992/ - Red Sands Fort, one of the Army forts.
Adrian

Moderator
I could run a full auto range with floating targets that sink when hit!
So long and thanks for all the laughs
https://280british.blogspot.com/
L

Sven,
I don't know about forts I'm afraid, but I do lnow you have never, ever had so many pleasant responses instead of the sh!te you normally receive - most of which you deserve though!
Regards.

Thanks one and all for Your terrific responses - I didn't realise there were so many towers still standing.

When British oil runs out, will the oil rigs be similarly left to the sea?

Sven said:
Thanks one and all for Your terrific responses - I didn't realise there were so many towers still standing.

When British oil runs out, will the oil rigs be similarly left to the sea?
Click to expand...

Doubt it broken down for scrap due to the increasing costs of steel these days or as been suggested before use them to ease the prison overcrowing situation. You could always use them to hold the illegals awaiting deporting and they wont set them alight ...nowere to run to

Supposedly the forts had the highest rate of awol than any other army post duringthe war as they were horrible places to live.An e boat once
sailed underneath one of the forts at high speed that must have taken some balls.
Where did all the old sweats go ? Oh.
M