Long story short: this diary has long been in my family. It is written on a signal pad - headed

'This book is for writing orders only, and leaves must not be torn out. It is on no account to be used for any other purpose. By Order.'

This instruction has twice been ignored - once in the keeping of the diary and again, sadly, in a large number of pages being torn out. I'll type the diary up over the next night or so, in case it is of interest to any Arrsers. If it isn't, tough luck

My Great Grandfather was a man of very few words in seems. This is not a literary or a 'war is hell' type diary. It is a very short account of events of a famous period. It comes to an abrupt end but not due to the author's passing at Gallipoli - he (Bdr. S J Roberts, 90 Heavy Battery, R.G.A.) survived Gallipoli and died of wounds in April 1917, in France. RIP, while serving with the 60th Heavy Battery, R.G.A.

Throughout the diary there are parts where you wish he had written more but he spent all day signalling and, I imagine, was sick of writing by the time he came off duty.

The diary begins with some noted down accounts of an order and of the contents of a leaflet dropped by the Turks on the beaches. I'll type those at the end.

All spellings, punctuation, etc are as in the diary.

'Landing made on Gallipoli April 25 (Note: the diary was begun and then crossed out and re-written when he got to Gallipoli. Hence the note about the landing preceding the diary entries).

May 1st Did not go ashore, on signalling Duty all day.
May 2nd Went ashore, the Bty has been in action all day, no casualties.
May 3rd We are doing some very hard fighting, shells bursting all over the Peninsular, we are
driving the Turks back.
May 4th Still fighting hard and driving them back.
May 5th Doing excellent work, not much chance of a sleep yet.
May 6th Left section still in same position. RTX have taken up an advanced position. Both
sections doing splendid work.
May 7th & 8th Both sections still doing well. No casualties.
May 10th No rounds fired by LX
May 11th There has been not much doing today until dusk and then it was like hell being let loose.
May 12th One man slightly injured in RTX. Shells have been pretty close today but no harm done.
May 13th & 14th Shells coming on the beach and round about from gun christened Black Maria. Lots of
mules and horses killed, few casualties amongst different corps working on the beach.
May 15th Amn. Wagon belonging to Black Maria blown up by 14th Siege Bty. No shell fired by LX.
May 16th Infantry massing for big attack.
May 17th Black Maria firing again today, one driver slightly wounded.

As far as I know, Bdr. Roberts joined the Army from school and served in India until WW1. I speculate (but can't prove) that he was amongst the regulars who returned to the UK, prior to active service, once territorial units had been sent to India to replace them. 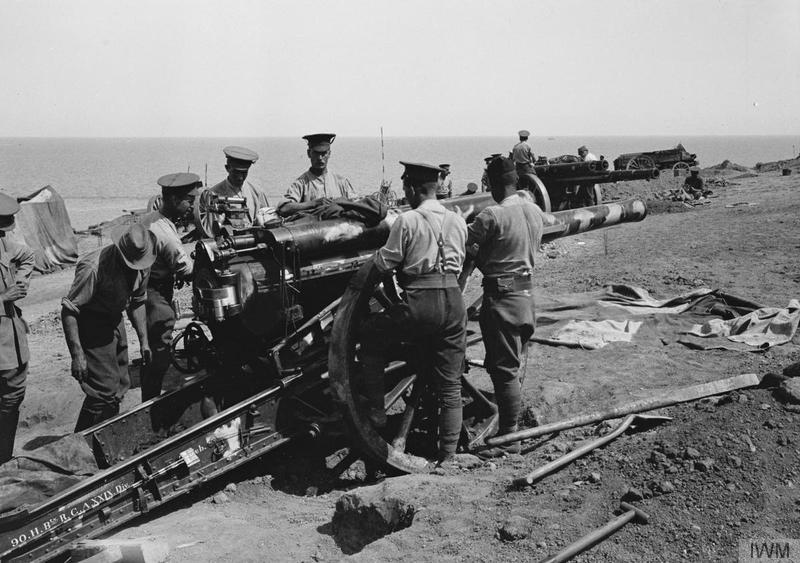 The ships mentioned in the diary so far, the RMSP Aragon, and HMS Lord Nelson, are below: 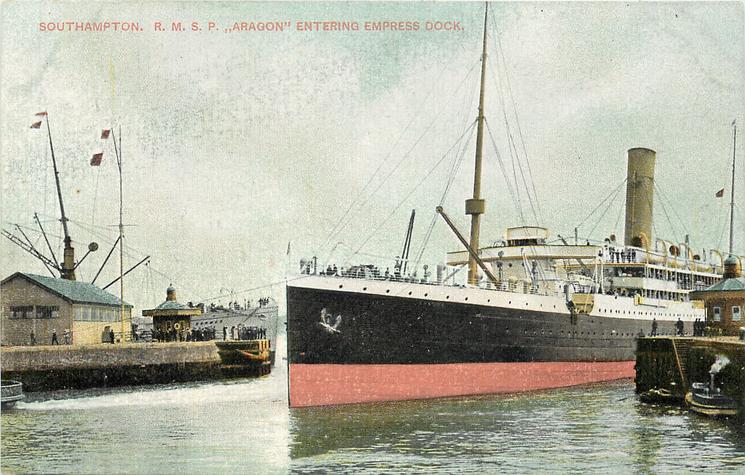 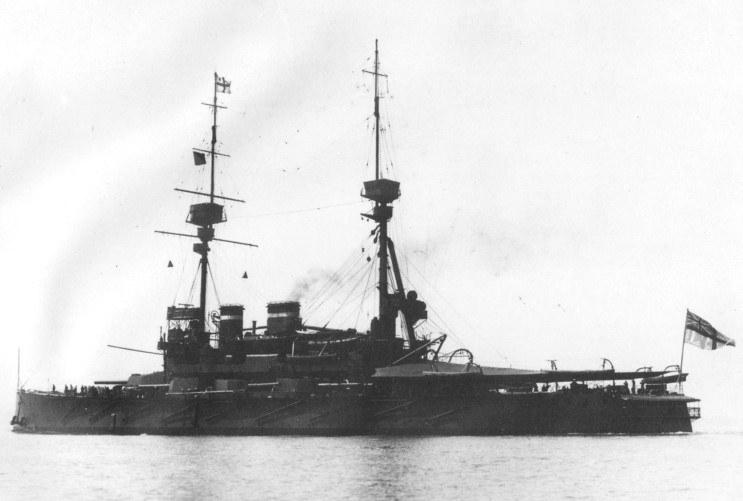 You may also like this - Farewell to the Horses: Diary of a British Tommy 1915-1919 - by Robert Elverstone , just a couple of quid off amazoon.
Never underestimate the power of stupid people in large groups.

CptDanjou said:
You may also like this - Farewell to the Horses: Diary of a British Tommy 1915-1919 - by Robert Elverstone , just a couple of quid off amazoon.
Click to expand...

Thank you; I'll get that.
NULL

Red Hander said:
Thank you; I'll get that.
Click to expand...

My Grandfather was in the same regiment as the author , it is a truly fascinating read .
Never underestimate the power of stupid people in large groups.

Great thread and very much of interest OP. If anyone wants primary source Gallipoli diaries there are many free originals on archive.org, with pencil marks and cracking photographs. Writer Compton MacKenzie's memories for one, and Chaplain Creighton's illustrated experiences with the 29th Division. Or Bryan Cooper's with the 10th Irish Division. 'Trooper Bluegum' served on Gallipoli for five months before being evacuated to England with enteric fever, and died of bloody flu in 1919. He was Australian journalist 2nd Lt Oliver Hogue (Amazon).
Favourite ARRSE pages: the ARRSEpedia Military Genealogy category.
https://www.arrse.co.uk/wiki/Category:Military_Genealogy 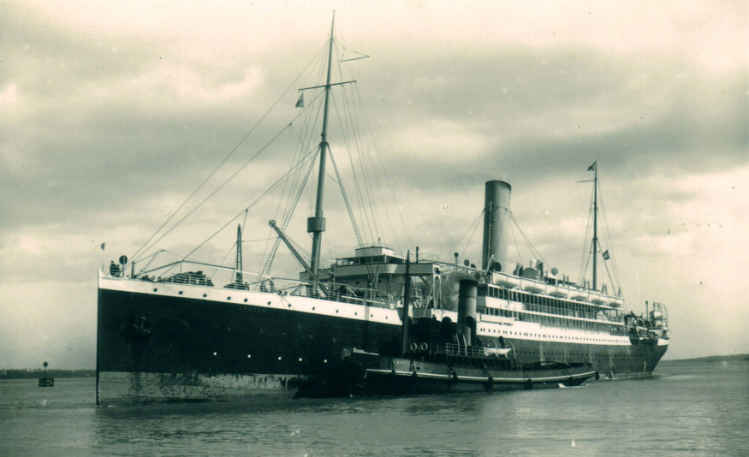 My grandfather was torpedoed on both Leasowe Castle and Wayfarer .survived both and the whole war.
Never underestimate the power of stupid people in large groups.

Part 2 of a very short diary of Gallipoli:

'May 18th More Black Marias today. Heavy fighting all night
May 19th & 20th A few Black Marias not much damage done
May 21st, 22nd, 23rd & 24th Things have been very quiet the last few days, occasional shots being fired.
May 25th Italy declared War on Austria and HMS Triumph sunk by submarine (1).
May 26th Very quiet, more troops have arrived.
May 27th HMS Majestic sunk by submarine (2),(3).
May 28th Cpl. Holmes (4) and Gr. Holden (5) killed. Our first serious losses.
May 29th, 30th, 31st Nothing special or serious has happened.
June 1st, 2nd 3rd Things are still rather quiet, hope there will soon be something doing.
June 4th A big bombardment to take place today, expect it to start by 12 o'clock. Great success today, our territorials had bad luck being held up by barbed wire which must have been missed otherwise I think they would have advanced further. The Glorious 29th have done splendid work and all praise is due to them. We took 400 prisoners including Turkish and German Officers. Attack finished at 4 o'clock, counter attacks are expected. All counter attacks were repulsed with serious loss to the enemy. An advance of about 400 yards was made. Prisoners were taken by the French who done good work.(6).
June 5th, 6th, 7th, 8th, 9th up to the 17th Has been very quiet.
June 18th Anniversary of the "Battle of Waterloo". Light bombardment, we lost one trench but took it again with two or three more, do not know the proper result. Getting fed up.
June 19th & 20th Rather quiet, shall be glad to get a move on.
June 21st French have been bombarding the Right Flank and taken several trenches.
June 22nd Still holding our own.'

I am afraid the diary ends there. The remaining pages [if they were diary entries] are torn out. There remains only a copied Special Order, and the copied text of a leaflet dropped on Cape Helles by Turkish aircraft. I will type those up tomorrow evening.

The author of the diary, Bdr. S J Roberts, escaped injury in Turkey. With the 60th Heavy Battery he moved to France on 14 June 1916. He died, aged 28, in the Somme area of the Western Front on 22nd April 1917 from wounds received as a result of enemy gas shell fire.

I've only access to one (poor) photo of Stephen: 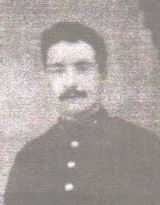 1. [Courtesy of Wiki]: HMS Triumph, originally known as Libertad, was the second of the two Swiftsure-class pre-dreadnought battleships of the Royal Navy. The ship was ordered by the Chilean Navy, but she was purchased by the United Kingdom as part of ending the Argentine–Chilean naval arms race.
On 25 May, the ship was underway off Gaba Tepe, firing on Ottoman positions, with torpedo nets out and most watertight doors shut, when she sighted a submarine periscope 300 to 400 yards (270 to 370 m) off her starboard beam at about 1230 hours. It belonged to the U-boat U-21 under the command of Lieutenant Otto Hersing.Triumph opened fire on the periscope, but was almost immediately struck by a torpedo, which easily cut through her torpedo net, on her starboard side. A tremendous explosion resulted, and Triumph took on a list 10° to starboard. She held that list for about five minutes, then it increased to 30°. The destroyer Chelmer evacuated most of her crew before she capsized ten minutes later. She remained afloat upside down for about 30 minutes, then began to sink slowly in about 180 feet (55 m) of water. Three officers and 75 enlisted men died in her sinking.

2. HMS Majestic was a Majestic-class pre-dreadnought battleship of the Royal Navy. Commissioned in 1895, she was the largest pre-dreadnought launched at the time.
On 27 May 1915, while stationed off W Beach at Cape Helles, Majestic became the third battleship to be torpedoed off the Gallipoli peninsula in two weeks. Around 0645 hours, Commander Otto Hersing of the German submarine U-21 fired a single torpedo through the defensive screen of destroyers and anti-torpedo nets, striking Majestic and causing a huge explosion. The ship began to list to port and in nine minutes had capsized in 54 feet (16 m) of water, killing 49 men.[9] Her masts hit the mud of the sea bottom, and her upturned hull remained visible for many months until it was finally submerged when her foremast collapsed during a storm.[9]

3. [From Wiki]: These two successes brought significant dividends: all Allied capital ships were withdrawn to protected anchorages and were thus unable to bombard Ottoman positions on the peninsula.[20] For these two successes, the crew of U-21 was awarded the Iron Cross by Kaiser Wilhelm II, while Hersing himself received the Pour le Mérite, Germany's highest award for valor.

4. Cpl George Holmes is commemorated on the Helles Memorial, Gallipoli. The memorial commemorates those who died at Gallipoli but have no known grave.

5. Gnr. Ralph Holden was 21 years old when he was killed. He is buried at the Skew Bridge Cemetery, Cape Helles.

6. 'On 4 June, the Third Battle of Krithia took place at Helles. It won a small advance at a heavy cost- 6,500 Allied and 8000 Turkish casualties...The Allied artillery at Cape Helles could be heard at Anzac, being one continual thunder all day.'