News media have been prevented from showing a photo of David Cameron with fellow Oxford dining club members.
The image of the Tory leader, which shows him in about 1986 dressed in the uniform of the elite Bullingdon Club, has appeared in several newspapers.

It is thought Labour was planning to use the picture on an election poster.

But the photographers who have withdrawn it say they acted for commercial reasons and have had no contact with the Conservative Party.

The Conservatives have also denied asking the Oxford-based company Gillman and Soame, who own the copyright, to withhold permission to show the picture.

The photographers told BBC Two's Newsnight they had taken a "policy decision," after the picture appeared in national newspapers, not to allow any school photographs they own to be published.

BBC Two's Newsnight has commissioned a painting of the scene shown in the Bullingdon picture.

The Bullingdon Club is famed for its hard drinking and bad behaviour, and Mr Cameron has always refused to talk about it.

The club's members have become notorious over the years for vandalising restaurants and trashing students' rooms.

Former members include Alan Clark, who gained fame as a political diarist after serving as a junior minister in Margaret Thatcher's government.

Andrew Gimson, author of The Rise of Boris Johnson, said: "I don't think an evening would have ended without a restaurant being trashed and being paid for in full, very often in cash.

"A night in the cells would be regarded as being par for a Buller man and so would debagging anyone who really attracted the irritation of the Buller men."

In the photo Mr Cameron and several other Bullingdon members, including the young Boris Johnson, now shadow higher education minister, pose in their Â£1,000 uniforms of blue ties, tails and biscuit-coloured waistcoats.

The Labour Party is thought to have been planning to use the image to attack Mr Cameron at the next general election.

Commentators, including former Labour deputy leader Roy Hattersley, have said it is potentially far more embarrassing to the Tory leader than the recent story about him taking cannabis at Eton.

Newspaper columnist Peter Hitchens told Newsnight: "I think it tells us something about David Cameron that he doesn't much want us to know, that he is not the ordinary bloke that he claims to be.

"That he is actually much grander and much more aristocratic than he has made out."

But Tony Blair also has an embarrassing photo from his student days.

The photo of the prime minister from the 1970s shows him with fellow members of an Oxford university dining club.

It has been published many times before in a cropped format - but Newsnight has shown that the full photo shows him making what appears to be a rude gesture.
Click to expand...

Caption to piccy of Cameron reads

"BBC Two's Newsnight commissioned an artist to paint this version of a photo showing Conservative leader David Cameron (back row, second left) while a member of the Bullingdon Club, an elite Oxford dining group".
Click to expand...

Lots of elites going round at the moment - know anything about this mistersoft?

[quote="rockape34]Lots of elites going round at the moment - know anything about this mistersoft?[/quote]

In all seriousness, look at the photo. Look hard at all the faces, and (hint) their hands. Look at how they generally present themselves. 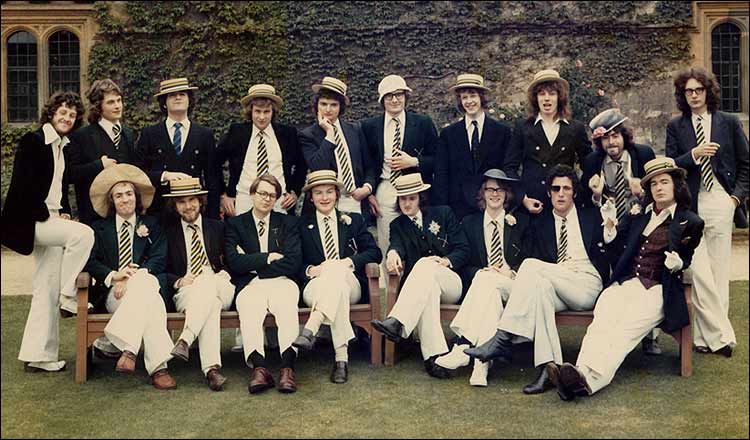 ... ask yourself which one you'd least want to become prime minister ...
Fak off. I'm angry.

The one who lives up to his hand gesture?
PVR, conclusive proof money can buy happiness.

None of them must have a nut sack of any real quality, they're managing to cross their legs.

A feat I am unable to achieve due to the large characteristics of my piece.
Smoke Pints, Drink tabs.

You should see some of my less formal NAAFI, I mean, Mess group photographs!

I hope none are ever published on the front page of a newspaper....

Is Cherie the one with the beard next to Bliar?
PVR, conclusive proof money can buy happiness.

Looks more like something a ventriliquist would shove his hand up the back.

I wonder where Bliar's OTHER hand is?
PVR, conclusive proof money can buy happiness.

Every one does stupid things at school/uni. Thats the point of being young and stupid.
I don't care if DC is some posh twit, if he maeges to get the hospital to work, and backs the army/police then fair enough.

He won't of course, he is a politicien and so a lower form of life than a virus. I still don't care that he went to a posh drinking club.
"Duncan Ferguson elbowed me in the neck three times and I was beginning to get a bit angry. I swore at him in Austrian and I know he couldn't possibly have understood it. Even so, he suddenly swung round and thumped me in the stomach. He got sent off, but I began to appreciate how he earned his reputation as a hard man. It was a nice punch, I have to say."

Mister_Angry said:
In all seriousness, look at the photo. Look hard at all the faces, and (hint) their hands. Look at how they generally present themselves.

... ask yourself which one you'd least want to become prime minister ...
Click to expand...

The cnut in the hat........or the cnut without a hat!
Setting unbelievably low standards since 1960 and consistently failing to achieve them at every given opportunity.........recommended for a commission!!

Bravo2nothing said:
None of them must have a nut sack of any real quality, they're managing to cross their legs.

A feat I am unable to achieve due to the large characteristics of my piece.
Click to expand...

Like you - also difficult,due to the nut-cracking qualities of my thighs!!
S

RIP
Photo looks like a meeting of the Brian May fan club!
[SIGPIC][/SIGPIC]

Is that Jeremy Patchman?

mistersoft said:
Is that Jeremy Patchman?

No. Some silly bugger doing an impression of Roj Blake.

Crap. That dates me!