Not certain but I imagine kiwis would also have the Vietnam clasp.

Gallery Guru
According to wikipædia, one individual was awarded six clasps, but they don't mentioned who or which ones.
"Sorry, I'm saving my spit and blood for my honeymoon." --- Louise Belcher

Yes, you could be right about the Kiwi's but I think I read somewhere that it only went to the Aussie SAS but I may be wrong.

Chimurenga. Yes I've heard rumours that there is someone who has 6 clasps but none of the medal collectors or dealers that I know can put a name to him or her, or what the clasps are.

Not going to be a her is it?

Probably not but I was just being politically correct. There are people out there who insist on being 'offended'. In fact they spend their lives wanting to be offended by just about anything.

Could have been converted since.

Gallery Guru
I vaguely recall reading somewhere (on ARRSE maybe?) that the guy with six clasps to his GSM was a loadmaster on a Chinook.
"Sorry, I'm saving my spit and blood for my honeymoon." --- Louise Belcher

Could well be. The crabs did and do get around a lot.

I don’t think that a six bar 62 GSM exists. I’ll play devils advocate for this position in a minute, but first I will address the issue of whether any Kiwi’s qualified for the Vietnam clasp raised earlier in the thread.


A little bit is known about the early Australian Training Team Vietnam who were the recipients of the clasp from 1962 onwards, but practically nothing is known about the first Kiwi contribution. NEWZAD was a small detachment of Kiwi engineers sent to Thu Dau Mot in June 1964.


The three way conversation between London, Canberra and Wellington finally decided in 1968 how the ANZAC’s would be accommodated by way of Imperial campaign awards. The commitment of NEWZAD was determined as the cut of date between the award of the Vietnam clasp and the award of the new ANZAC only, Vietnam Medal.


Lot’s of Kiwi’s eventually served in the Australian Army in Vietnam and quite a few in AATTV, but none were in the original few tranches of AATTV sent to Vietnam between 1962 and 1964 who qualified for the Vietnam clasp.


It is not accurate to assume that all the recipients of the Vietnam clasp were SAS. Some were. Most of those assigned to USSF A Teams however were not. In fact a large proportion were not even Infantry Corps. Off the top of my head I think Rae Simpson VC was the only SAS Company member who qualified for the clasp and was posted to an A Team. The majority of SAS members who received the clasp were instructors at the Ranger Training Centre in Duc My.


While 3 clasp 1962 GSM’s are relatively unusual they are still highly prized by collectors. 4 Clasp examples are exceptionally rare. Few, very few 5 clasp medals are known of and some have been sold at auction. There has never been an authentic 6 clasp offered to the market, although I am aware of at least one that lacked any sort of provenance.


If such a beast existed and it’s bona fides established, it would be worth a small fortune. Most multi clasp GSM’s were awarded in the first ten tears 1962 to 1972, multi clasp (Three or more) from the Argyll and Sutherland Highlander’s, 42Cdo, The RAF Regiment and 4RTR are pretty common.That is to be expected because in the late sixties these units were very busy shuttling the Indian Ocean extinguishing post colonial fires. From 1972 to 1982 Northern Ireland was the only clasp on offer until another flurry of activity towards the end. If a six clasp example existed I would expect it to have been earned in the period 1962 to 1972. Forty two years have passed since then and not one has seen the light of day. I find that proof enough that there isn’t one.


I’m skeptical too that a Chinook loadmaster could have qualified for one in the last flurry. I’m pretty good on the period 1945 to 1975 but get a bit shaky after that so there is a good chance I might be wrong, but…..


Since 1980 the clasps that have been awarded are:


Mine Clearance Suez Canal- I don’t know, I thought this was a Navy only exercise. Chinooks doubtful.


Gulf - Again I thought this was purely a Naval affair. Chinooks unlikely to be involved.


So there were only 7 opportunities to be awarded a campaign clasp from 1980 when the Chinook was introduced to the present. I think the likelihood of any serviceman qualifying for 6 out of the 7 to be exceptionally slim. I’ll be delighted to be wrong and delighted to learn more about these latter campaigns and the units involved in them.

@chippymick you'll find this of interest. 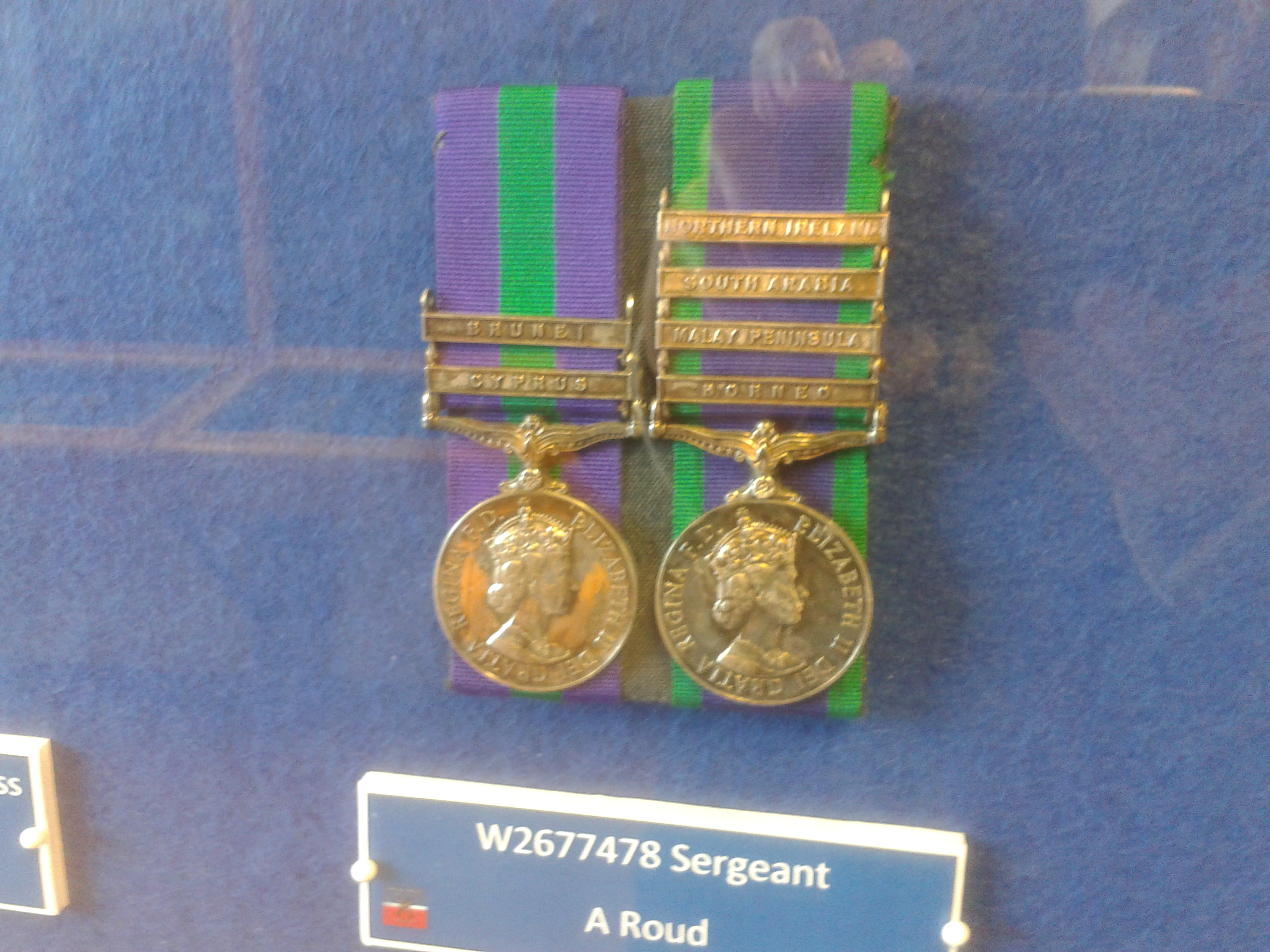 Quite so. I think they should count. But strictly the original enquiry was six to the '62.

What unit or units just as a matter of interest.

chippymick, many thanks for your analysis. Here in Hereford there are probably about ten guys with 5 clasp 62 GSM's amongst some remarkable medal groups. For your interest attached piccie is my own group. Borneo, Radfan, South Arabia, Dhofar and NI. Note absence of LSGC! I was a naughty boy on occasion.
Thanks

As I said-of interest only. And they are RAF Regiment.

I think that it reinforces my theory, and it is only a theory, that if a 'sixer' exists than it more likely would be:

a) awarded in the first decade instituted.

b) Most likely to be from either Argyll and Sutherland Highlander’s, 42Cdo, The RAF Regiment and 4RTR.

Of course my conjecture as to part a) could be possibly shot down because I know so little about the last ten years. I am interested in knowing the answer to my wild arse speculation as to how a 'sixer' might be possible from NI to Iraq Air Ops.

haloman said:
chippymick, many thanks for your analysis. Here in Hereford there are probably about ten guys with 5 clasp 62 GSM's amongst some remarkable medal groups. For your interest attached piccie is my own group. Borneo, Radfan, South Arabia, Dhofar and NI. Note absence of LSGC! I was a naughty boy on occasion.
Thanks
Click to expand...

Again it reinforces my theory as to the period most likely to throw up a 6 clasp GSM . Can I ask if you were, Argyll and Sutherland Highlander’s, 42Cdo, The RAF Regiment or 4RTR or is the reference to Hereford a huge hint or where you have retired to?

A two clasp GSM in Australia is an almost certain indicator that you were SAS. If it is South Vietnam and Borneo you can almost guarantee it.

Either way, after nearly 50 years, if you know 10 fellows with 5 and none with 6 I think that might be because there isn't anyone. Logic and human nature suggests you would have heard about him by now.

I once had a four bar GSM named to an Argyll, he was a Sgt on leaving in 84.

Yes chippymick, I served 29 years of which 25 were here in Hereford and a lot of my colleagues saw very similar service to me so they would have the same clasps. Some had Malay Peninsular instead of Radfan or Borneo. I think that I qualify for the Malay Peninsular too. The paperwork is in so watch this space!
Dhofar was in the 70's and we had RAF Wessex in support to build the Hornbeam Line so maybe the Chinook loadie was with a Wessex squadron then.

I take your point re: Dhofar in 1976, all things are possible, but for mine it is still a stretch.

I'd value your opinion on how valid you think of my supposition that; "either way, after nearly 50 years, if you know 10 fellows with 5 and none with 6 I think that might be because there isn't anyone. Logic and human nature suggests you would have heard about him by now."

Thanks very much for sharing your story.