Here we go again, this time it's a Dreadnaught, the most important step in the evolution of the ironclad Battleship, she was remarkable for her time, nothing else could touch her, and she was British.

let's have a peek in the box. I've already taped the hull halves together for a comparison shot with HMS Westminster's hull.

first step, joining the hull using the strengtheners that tie the hull halves together. Getting the keel to line up longitudinally was key here, it wanted to join out of line making a step. So lots of tightly applied masking tape to hold it while it dried. 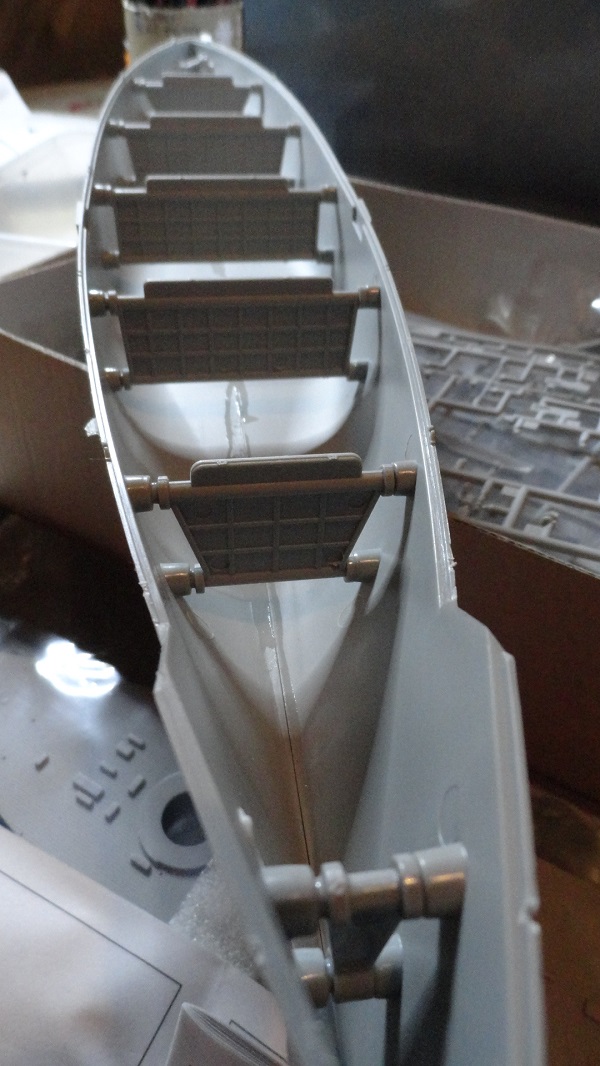 The next step is the deck to hull, and just like their Westminster kit, the fit is perfect.
the Stern 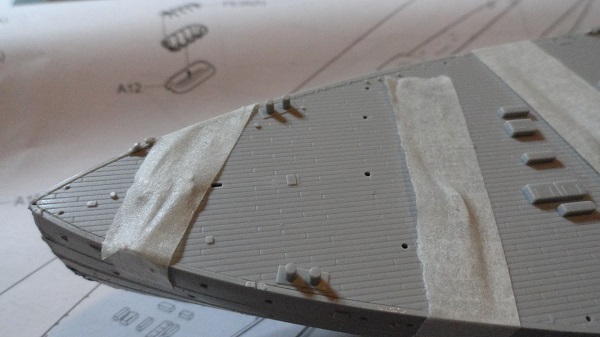 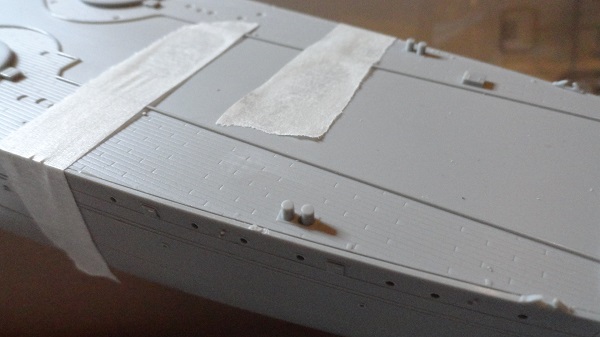 let that dry overnight last night, this morning, took of the tape and I'm very pleased with the fit. 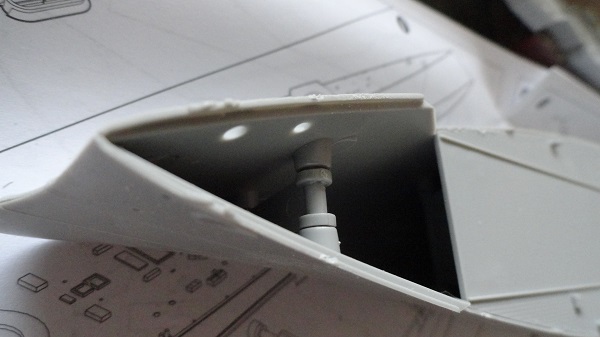 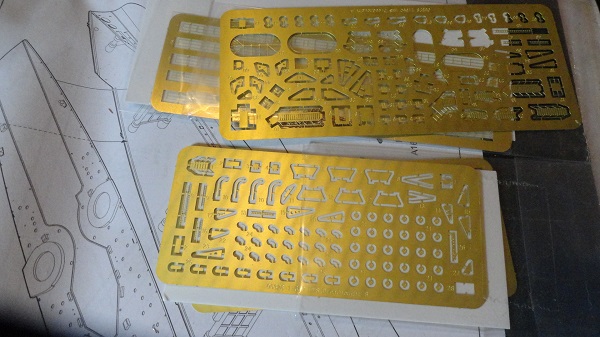 thank you Gentleman, thank you
D 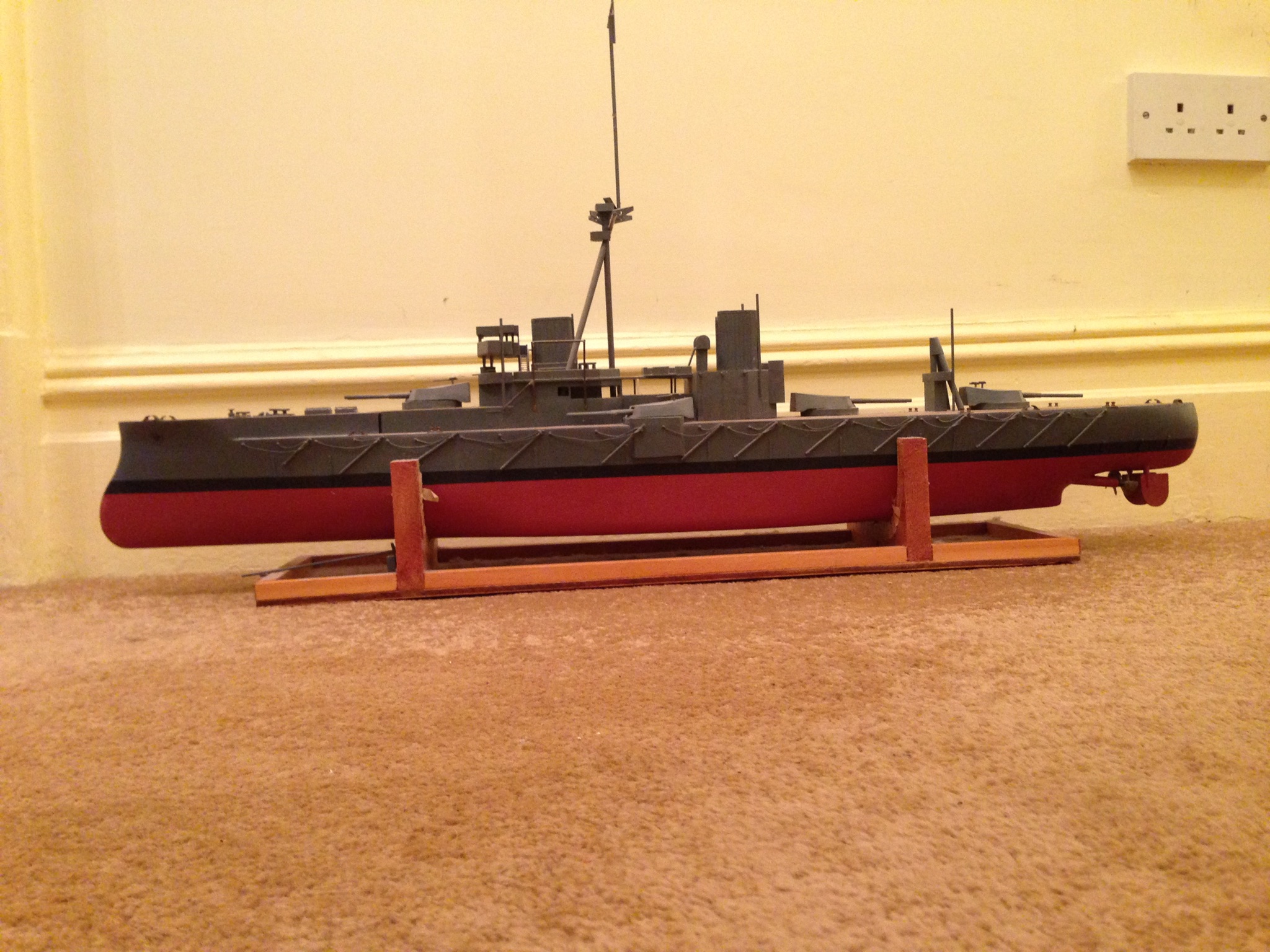 Ace choice. I scratch built this about 20 years ago - it’s a 3’ radio control one I built for my lad who was ten at the time.

I’ve got a 6’ glass five one that wants building at some point. Pre dreadnought and British battleships and cruisers up to the end of WW1 are the best.

Can’t wait to see you build it.

Ace choice. I scratch built this about 20 years ago - it’s a 3’ radio control one I built for my lad who was ten at the time.
/QUOTE]

That's impressive Si, so your lads 30, I didn't think you were old enough to have a grown up Son, Blimey. Must build something RC one day, whenever I go to SMC I'm surrounded by the stuff, it's 75% of their business.
Click to expand...

the hull ready for it's foredeck and superstructure base, 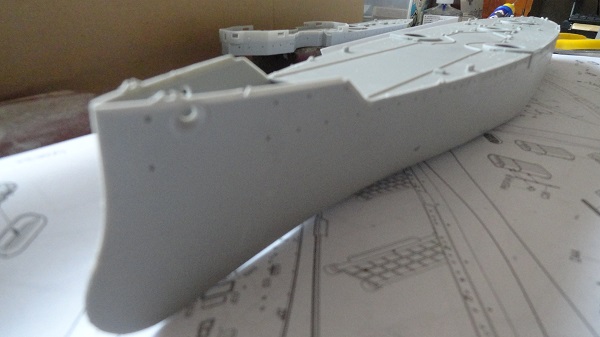 fore deck on. I wonder what those diagonal strakes are for? The foredeck isn't fitted on the instruction sheet till late in the sequence of assembly, that's rollocks, you don't fit a major assembly late, with all the pe fitted, asking for trouble. 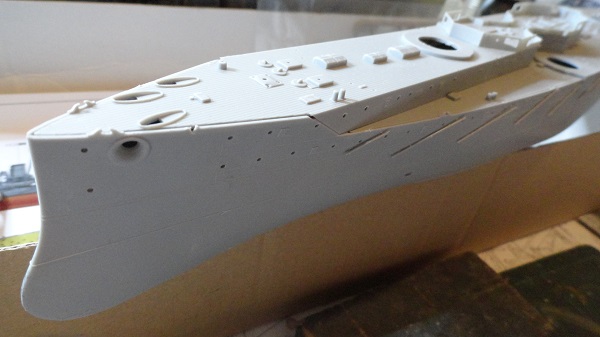 thank you Gentleman, thank you
D

Old enough to have run around with an SLR unfortunately (from an age perspective).

SPROCKET321 said:
the hull ready for it's foredeck and superstructure base,
View attachment 606132
fore deck on. I wonder what those diagonal strakes are for? The foredeck isn't fitted on the instruction sheet till late in the sequence of assembly, that's rollocks, you don't fit a major assembly late, with all the pe fitted, asking for trouble.
View attachment 606133
Click to expand...

The ones on the side of the hull? My fading memory tells me hey swing out to support the anti torpedo nets .
A man with a fork in a world of soup.
D

tutankhamun said:
The ones on the side of the hull? My fading memory tells me hey swing out to support the anti torpedo nets .
Click to expand...

That’s exactly what they are. I seem to recollect they were removed - booms and nets before Jultand. I’ve got the ‘anatomy of HMS Dreadnought for my 6’ model - I’ll have a look and confirm.

@SPROCKET321 - which year are you modelling as there were quite a few mods done to the ship during her lifetime.

well she missed the fun and games of Jutland, being serviced in harbor, so I'll do her in her glory days, as she was the first and mighty.

SPROCKET321 said:
well she missed the fun and games of Jutland, being serviced in harbor, so I'll do her in her glory days, as she was the first and mighty.

She was a flag ship in ww1 I seem to recall. I did shed loads of research years ago but can’t remember the detail no. I’ll go and dig this book out now
D 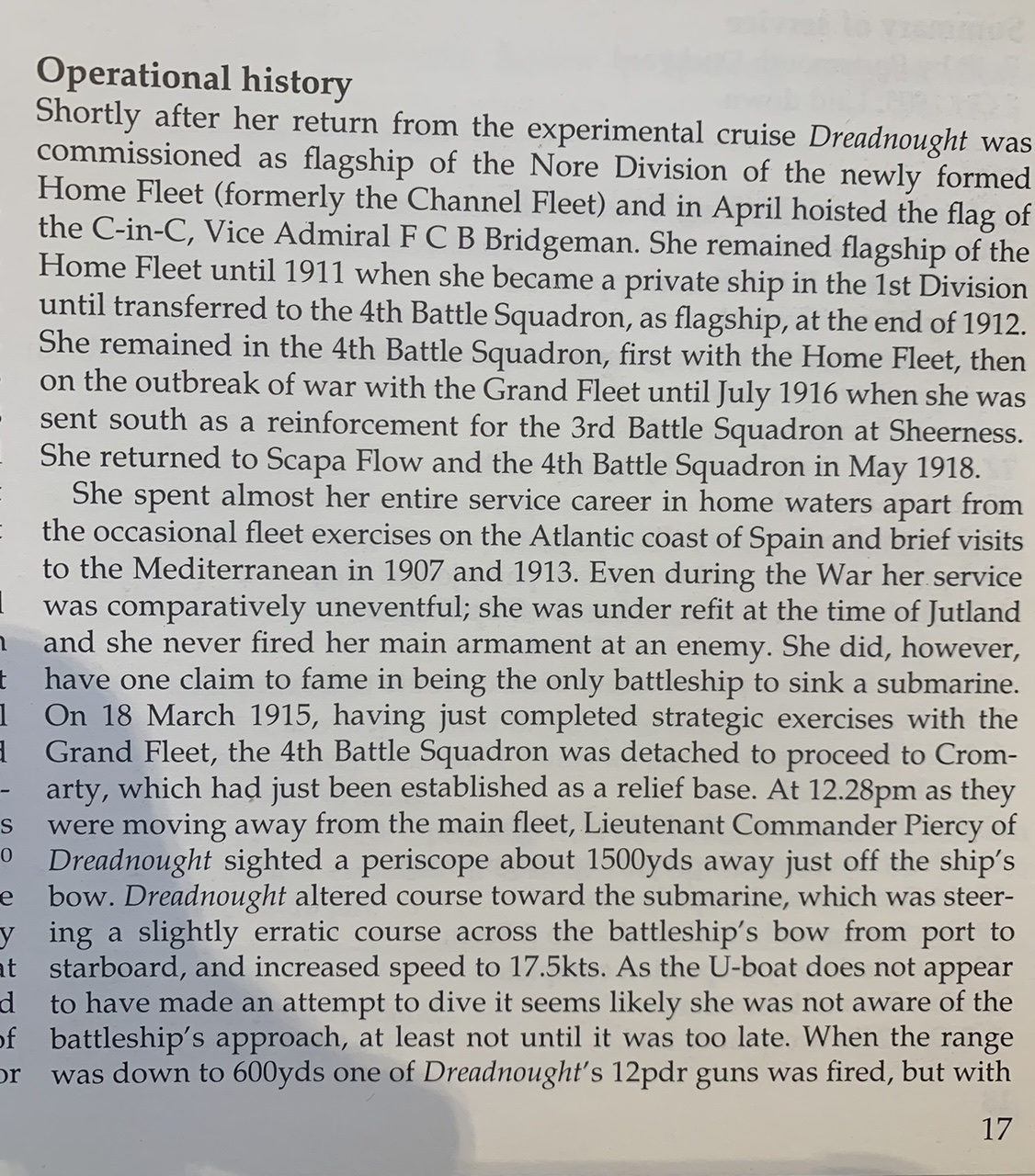 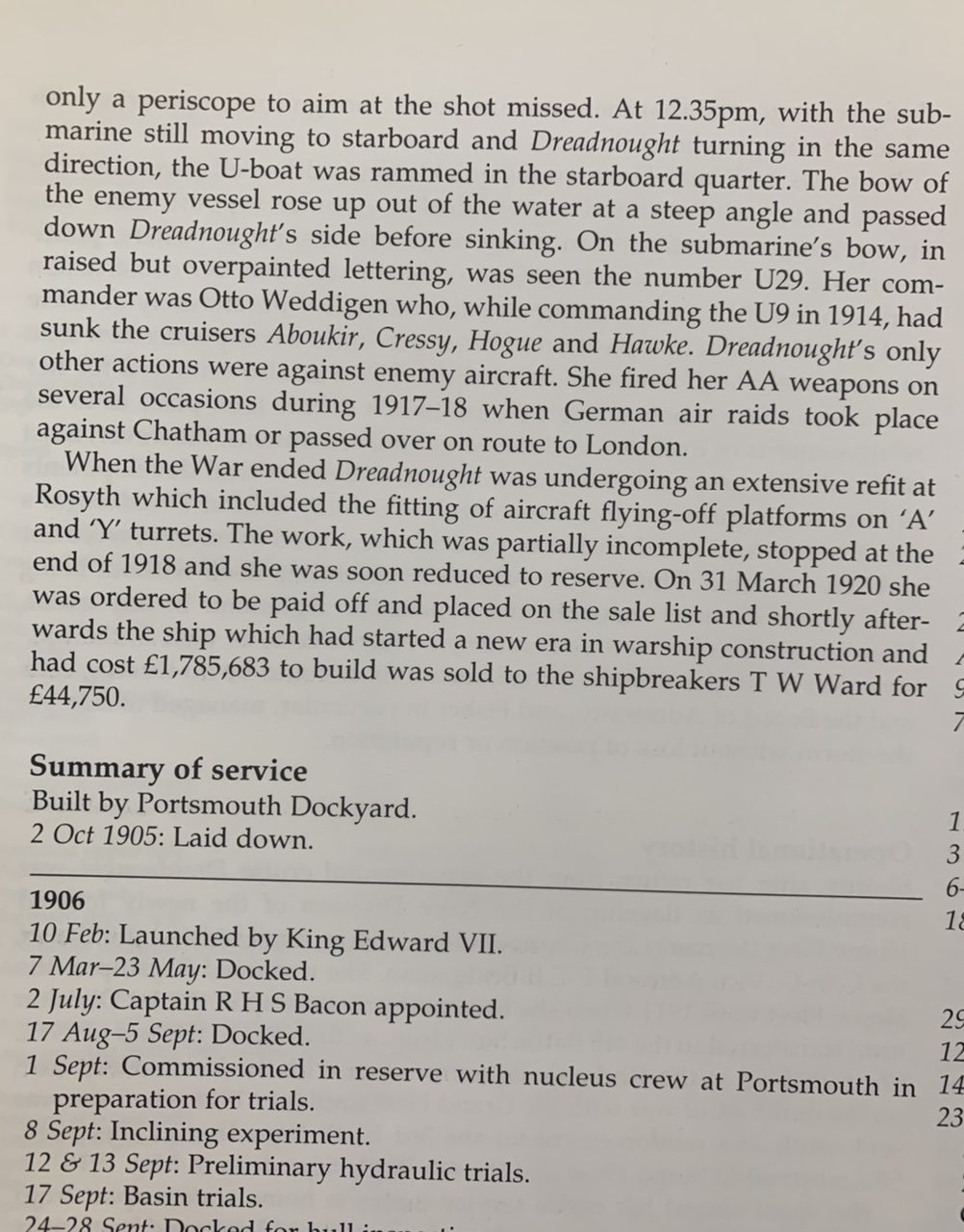 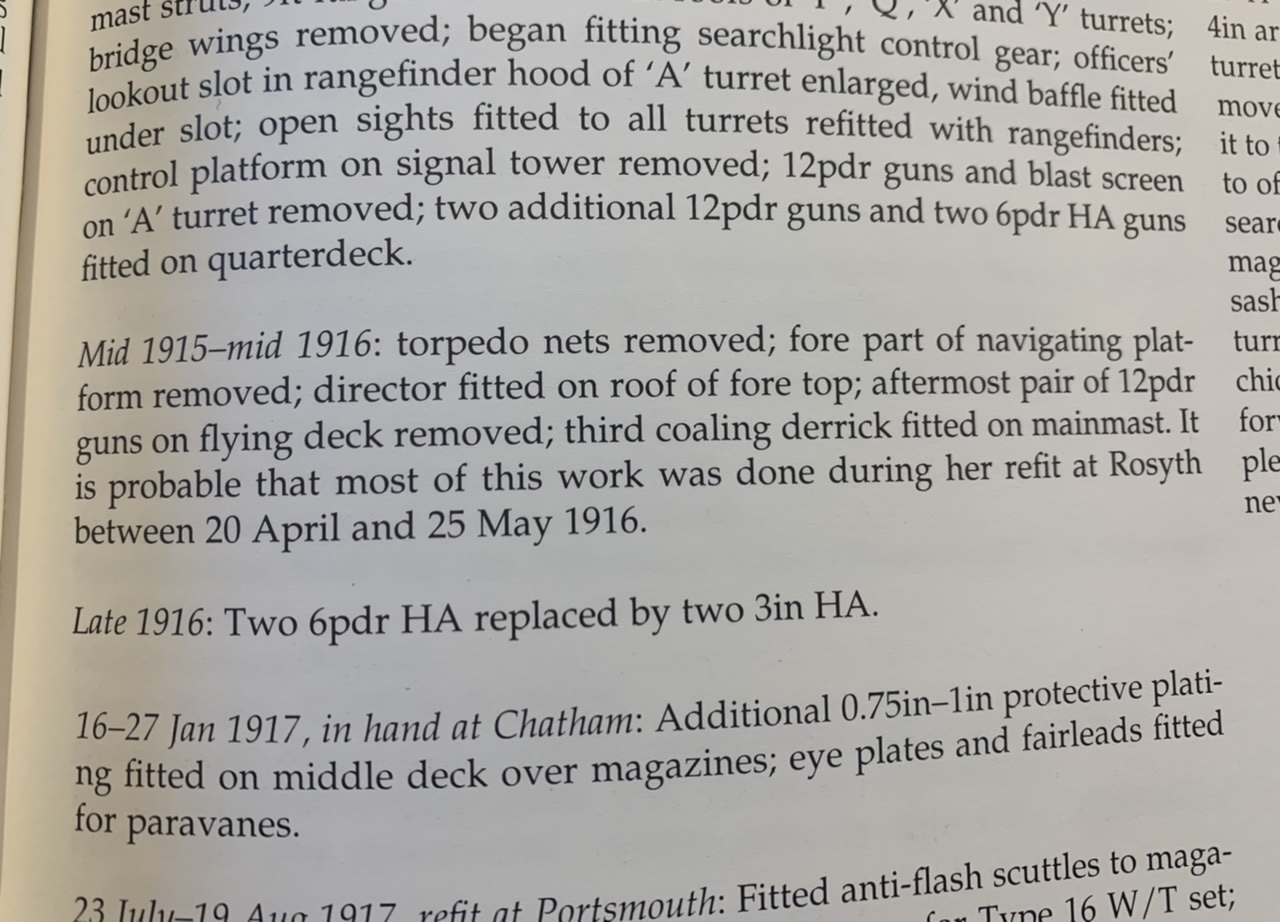 Masking and air brushing the most crucial part of the whole build, getting the base colours on the hull right. 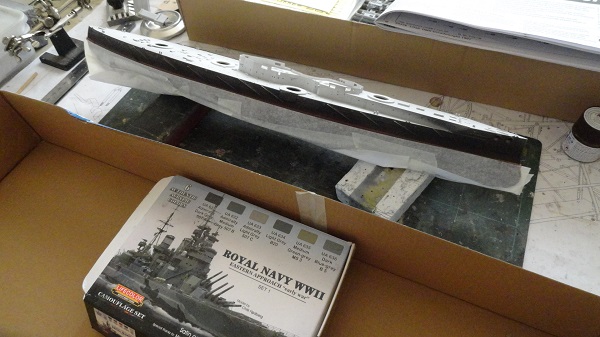 masking and painting the deck tan 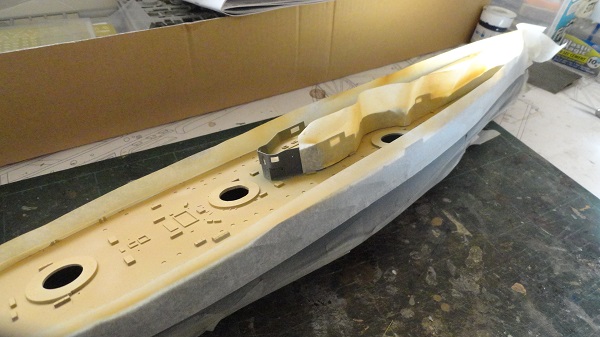 peeling off the mask for the boot topping 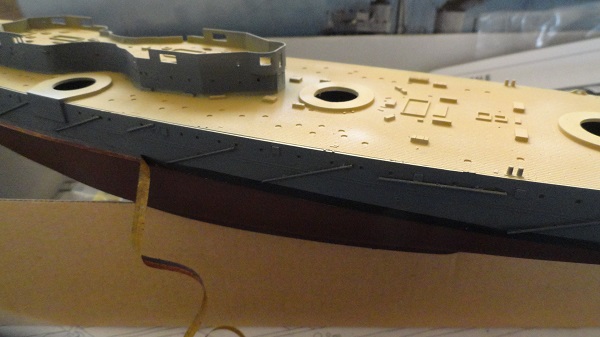 Really pleased how this turned out, once all the tape is off you can check out how much touching in with a paint brush is needed after the masking and airbrush has done it's work, 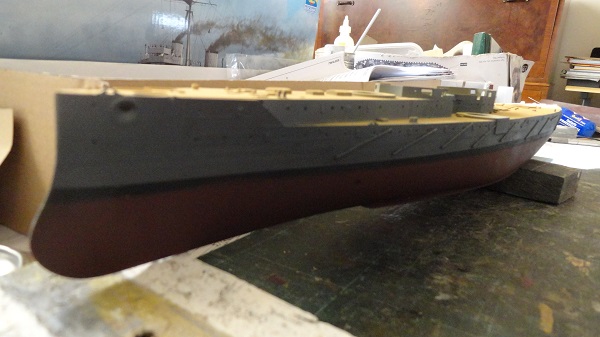 looks like the brush painting will be needed to fill in the top of the bulwark where it meets the wood deck, and touching in the metal fittings on the wood deck.

The Second Dreadnought.
Having started building Dreadnought, the Royal Navy knew that the following race to re-arm the Worlds Navy's would in large part be a numbers game. Who could build more and take advantage of the latest technologies fastest.
The Royal Navy was already leading the way in using cutting edge Marine Plant to power their latest generation of ships. They were also leading the way in terms of Fire Control with Admiral Sir Percy Scott leading the charge towards more accurate shooting at longer ranges.
And so as a Maritime Nation the Royal Navy needed to make sure they not only had a qualitative advantage, but also a quantitative advantage too.
Designs were drawn up before Dreadnought had taken to the water for trials on an "improved Dreadnought" for the 1906 Naval Estimates, on what would eventually become the Bellerophon Class.
The basic Dreadnought layout was kept, but Sir Phillip Watts made several small tweaks in the design. Most notable was the location of the ships Tripod Masts for her Spotting Tops as well as an addition of a heavy battery of 4" guns as defensive armament against Torpedo Boat Destroyers saw a ship that was 700 tons heavier than the original Dreadnought design.
Laid down at Portsmouth Dockyard in December 1906, nearly 2 months after Dreadnought started her trials Bellerophon would be launched on July 27th 1907 and completed in February 1909, with her two sisters HMS Superb and HMS Temeraire joining the Fleet in May and June meaning by the Summer of 1909 the Royal navy had a whole division of Dreadnought style Battleships in the Home Fleet at a time when the rest of the worlds Navy's who were joining the Dreadnought race hadn't yet got their first all big gun ships to sea.
Added to this the St. Vincent Class which started joining the fleet almost immediately after the Bellerophon's would give the Royal navy a serious edge in numbers in the Dreadnought race....

thanks for that info. 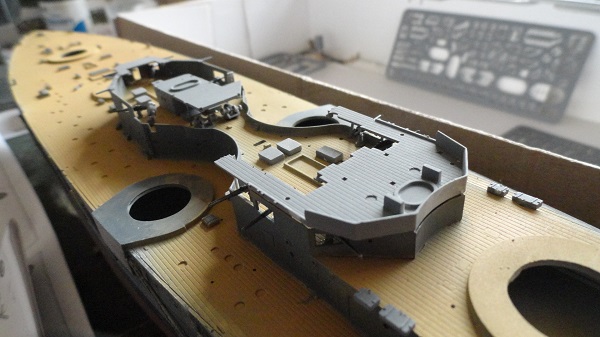 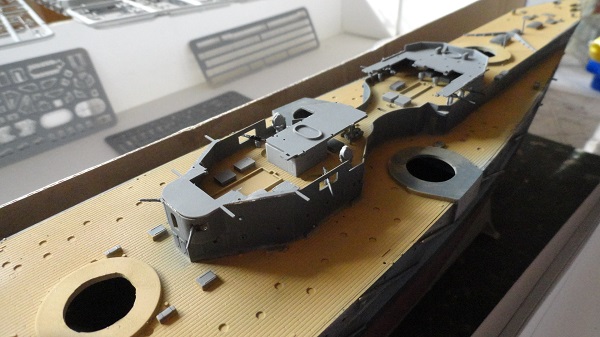 the anchor housing will need a bit of battered paint and rust where the chains come through. 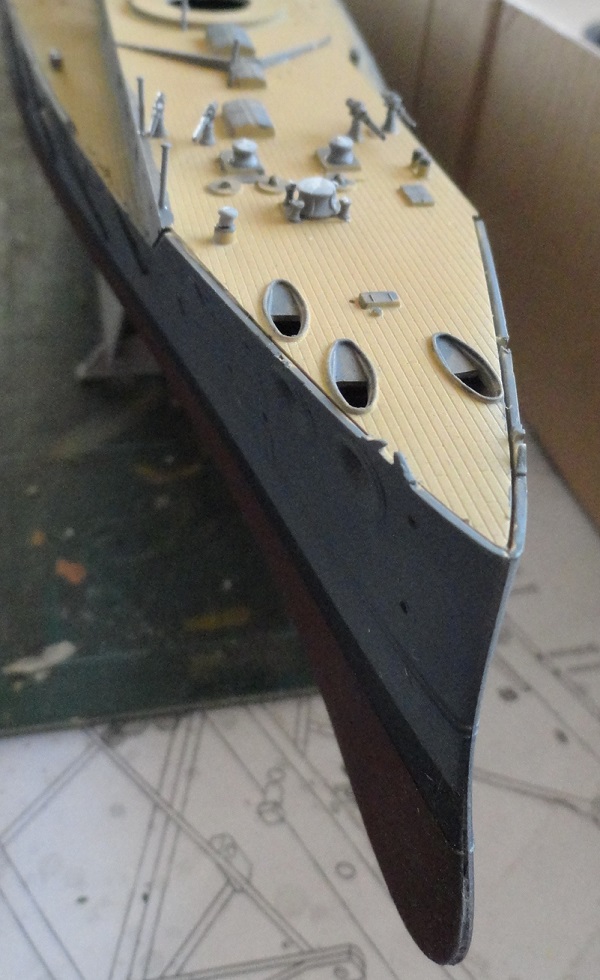 the fine details are skeleton like in their structure, very fine and fiddley, but they look good. 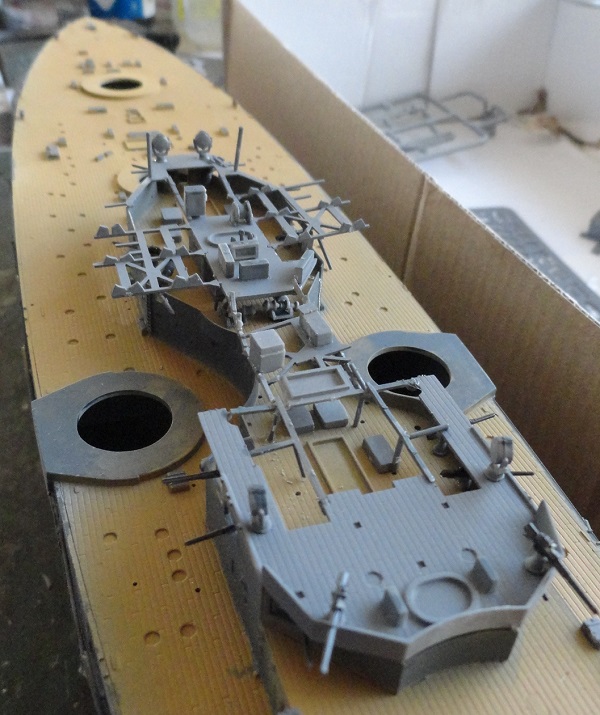 one piece of quite complex pe is this double rail area, it needs to be glued on in stages to get it to look right. 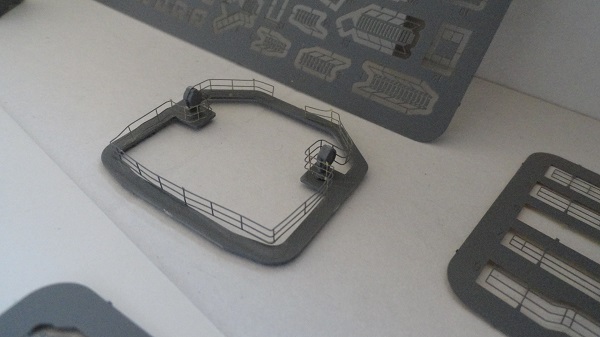 Once the inner rails are on right, the outer rails will go on next. 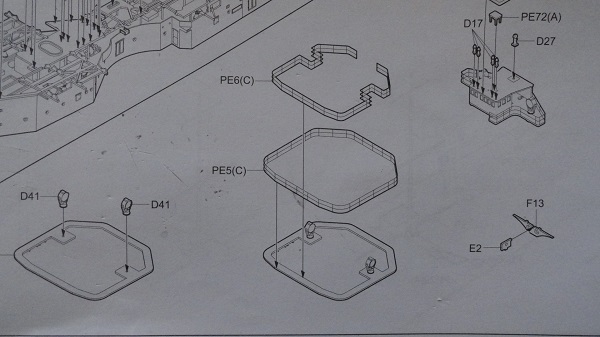 thank you Gentleman, thank you
C

Book Reviewer
Just… how many guns?!

It's bristling with them, still early days, before they worked out that a small caliber splash looks just like a large caliber splash to the spotters. 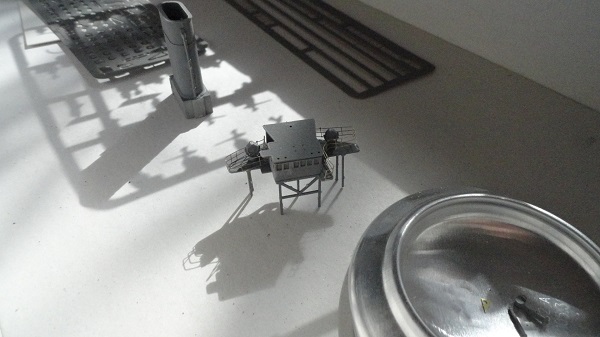 the deck after it's black enamel wash

more on the bridge 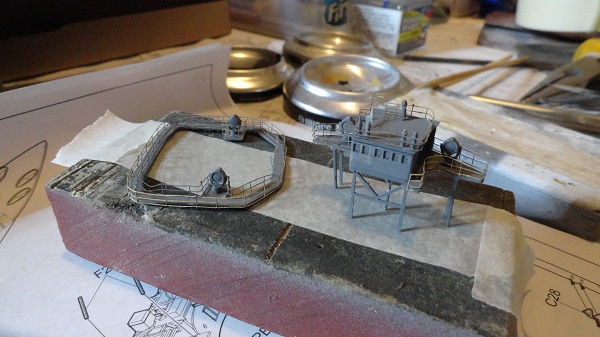