It pays to ensure that the footwear you’re wearing is up to the task in hand. Whilst in military terms, the remit for Public Order is fairly limited, it is something that crops up from time to time in various locations, as well as being an every day requirement in various fields of modern Policing. As such, it’s worth looking at the YDS Control Public Order boot across both fields.

For a military application, any type of Public Order boot is going to be limited in its uses due to the very nature of the boot. The weight of the YDS Control already precludes it from use in prolonged patrolling as fatigue sets in fairly rapidly, with the boots weighing in at 1990grams for a pair. If however, you’re looking for a pair of decent safety boots that will still fit into the military style, then although we’ve now changed thanks to PCS to brown boots, these fit the bill fairly well.

From a Policing perspective, the YDS Control boots are already in use in various departments, such as the Police Service of Scotland Public Order department in Jackton where they are issued as standard.

The boots themselves from the base up, have a dual density injected rubber sole which is designed in such a manner as to reinforce and strengthen the whole. The outsole is Nitron rubber with a lower density midsole that’s air injected – this means that cushioning and support in the sole is inherent in the boot, rather than having to rely on an insole which will degrade far quicker and require more frequent replacing.

The outsole is heat resistant to 300 degrees celcius and abrasion resistant with an SRC rating for anti-slip. This means the sole has passed slip tests on both ceramic tile wetted with dilute soap solution and on smooth steel with glycerol. The midsole is also nailproof, with the material covering the entire footbed to prevent ingress by sharps.

The leather for the boot is fullgrain cowhide with a textile inner that allows a decent level of wicking and breathing capability in what would otherwise become a hot and uncomfortable boot. 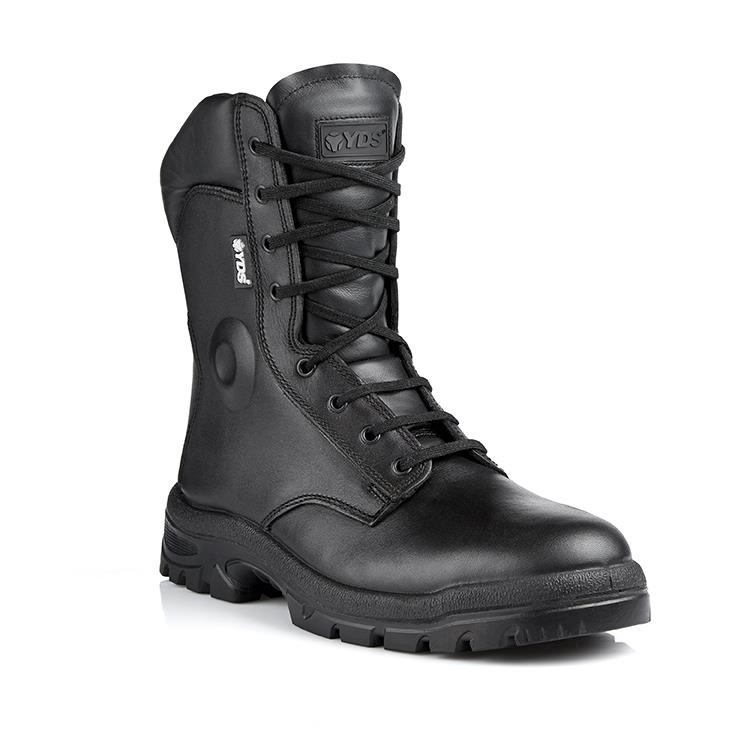 An interesting feature is the ankle impact zone. This is a protruding area of the boot in link with the ankle that acts as a cushion should you take a knock to the ankle bone, simply putting more material between a sensitive and fragile part of the body and whatever hazard is winging its way towards it.

With flame retardant laces and seams, the Control meets all the current requirements in line with BS7971 Type 2 Level 3 for Public Order boots, and have the usual YDS quality build about them on first inspection.

The insole is a fairly bog standard take on things, with slight increase in padding around the heel to aid in impact absorption, but it’s always worth shelling out for a Ortholite insole for any boot in my opinion.

The Control does take a while to break in, not aided by the presence of steel in the toecap which can withstand 200 joules of impact which relates to dropping a 20 Kg weight onto the toes from a height of 1020mm or about three feet which in Policing terms means that the Enforce entry device which weighs 16kg.

The other issue is that steel isn’t a great heat conductor, so if it’s cold, then your toes will know all about it but in terms of Public Order, you would be wearing suitable socks which would hopefully mitigate against this.

Having gone from the mob to the job, I certainly wouldn’t have any use for these in the army other than down the tank park in case I dropped something on my fragile little toes, but in the Police, they’ve become a fairly reliable bit of kit to have at hand with the rest of my gear. Unlike Public Order officers, there are no issue boots, so these are kept to hand and brought out if it’s one of those nights. In toe with the Enforcer for gaining entry, they’ve proved their worth time and time again, especially on those occassions when a door hasn’t quite come free but isn’t suitable for another smack with the big red key. A quick shunt with the boot to bring it down brings minimal discomfort or kickback thanks to the level of cushioning in the sole.

As I said, I stuck with the standard insole for a week or so then swapped out for the far superior Ortholite, which makes a massive difference. Combine it with thick socks though, and it’s not long before your feet build up a bit of a dab, even with the wicking liner. Realistically, unless it hit the fan (London anyone?) then you’re not going to have it on for prolonged periods of time without a chance to pop them of and air out.

There has been feedback from other Control users of the rubber seal around the sole and upper starting to peel away, but it’s not something I’ve personally experienced and this could be down to a variety of factors. Certainly in terms of the SRC anti-slip rating, it’s well merited as worn across a variety of terrain on wet days, they’ve held firm and prevent a face first dive into the dirt.

The other advantage to the Control boot is that you can pick it up for around £90, which for a Public Order boot with steel toecap, is a very reasonable price at various third party retailers. I suspect they’ve brought it down significantly in price as I am sure I recall it selling for over £100, but not anymore it seems!

Overall, a good boot that meets all the required standards but which may find it needs to change tack to keep up with the competition as other firms move to composite materials that offer the same level of safety but bring their own unique benefits to the party.

YDS Public Order Boots are available in the UK from Polimil.