This book is an Adventure Story set in the Second World War. It’s a novel, written as though it were a biography. In researching the lives of Wrens at that time, the author has read widely, both official documents and autobiographies, and has spoken to surviving Wrens from that era. Thus the description of life, authority and social mores of the time are very realistic and sometimes it’s hard to remember that it is a work of fiction.. The anecdotes and descriptions of characters seem to fall straight from the stories told by my Aunt and Uncle, who both served in the Royal Navy during the Second World War.

The story follows a Wren, Jane Beacon, an experienced sailor who wanted to ’do her bit’ and volunteered for service before the general call-up for women, which pulled my aunt into the service. The first chapter describes in great detail the evacuation from Dunkirk, and the work of the small boats which helped the Allies to rescue a third of a million men after France fell to the Germans. 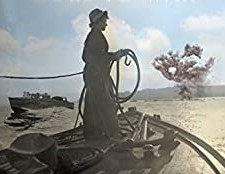 The book continues with the well-drawn characters set against the hardships of service life, from being strafed by your own side, to the curmudgeonly Naval Command Structure that hated having women in ’their’ Navy, and the various strong women who helped to re-form the WRNS, which had been disbanded after the First World War. I hadn’t realised that corporal punishment still existed, and the WRNS were subject to the disciplines of Naval Cadets, which included caning of bare buttocks. The descriptions of Naval daily meals, camaraderie and traditions are an added bonus to a story which rattles along at an excellent pace.

This book is most definitely worth a read, it’s a ripping adventure story, and an education for younger folks as to the battles that needed to be fought to give ladies the equalities we enjoy today. There are two more stories about this character in the pipeline - I shall be looking out for them at the Library!