Who Really Won the Battle of Marathon

Constantinos Lagos holds a BA in History from Athens University and an MA and PhD in Ancient History from Durham University. He teaches History in the Hellenic Air Force Academy and the Hellenic Open University. He is the author of a study of the Battle of Fort Rupel (6-10 April 1941) and of a biography of Constantine Perrikos, an aviator sunlight in the Greek wartime resistance. Since 2014, he has been a member of the international archaeological team excavating the ancient city of Tenea in Greece.

John Carr (translator) is a retired journalist living in Athens. Now an established historian in his own right, his previous books include Sparta's Kings, On Spartan Wings and a third book The Defence and Fall of Greece 1940-41 is awaiting publication.

The Battle of Marathon took place in 490 BC during the first Persian invasion of Greece. It was fought between the citizens of Athens, aided by Plataea, and a Persian force commanded by Datis and Artaphernes. The battle was the culmination of the first attempt by Persia, under King Darius I, to subjugate Greece. The Greek army decisively defeated the more numerous Persians, marking a turning point in the Greco-Persian Wars.

The first Persian invasion was a response to Athenian involvement in the Ionian Revolt, when Athens and Eretria had sent a force to support the cities of Ionia in their attempt to overthrow Persian rule. The Athenians and Eretrians had succeeded in capturing and burning Sardis, but they were then forced to retreat with heavy losses. In response to this raid, Darius swore to burn down Athens and Eretria. At the time of the battle, Sparta and Athens were the two largest city-states in Greece.

Although the Greek commentator Herodotus gives no estimate to the size of the opposing forces, Simonides claims 200,00 Persians, while Plato raises this figure to 500,000! Modern thinking reduces both of these estimates to around 25,000 plus 1,000 cavalry. The Greek forces have been estimated to be in the region of 9,000 - 10,000 Athenians with 1,000 Plataeans. Even so, the defending force was considerably smaller than that of their enemy.

This however, is just one area in which the book successfully, in my mind, argues the case of the figures. The main Greek warriors were the Hoplites, the Heavy Infantry. These well-drilled, well-equipped soldiers came from the wealthier families and spared no expense on armour and weapons. There was, however, a secondary unit within the Greek forces, the Light Infantry. These came from the poorer "servile classes" and had little or no armour and were armed with either a sword or a hatchet. This force of Light Infantry would have accompanied the Hoplites, making darting runs in and out of the enemy troops, harassing and weakening the enemy strength. Taking these additional troops into account, the Greeks were not quite as outnumbered as first implied! 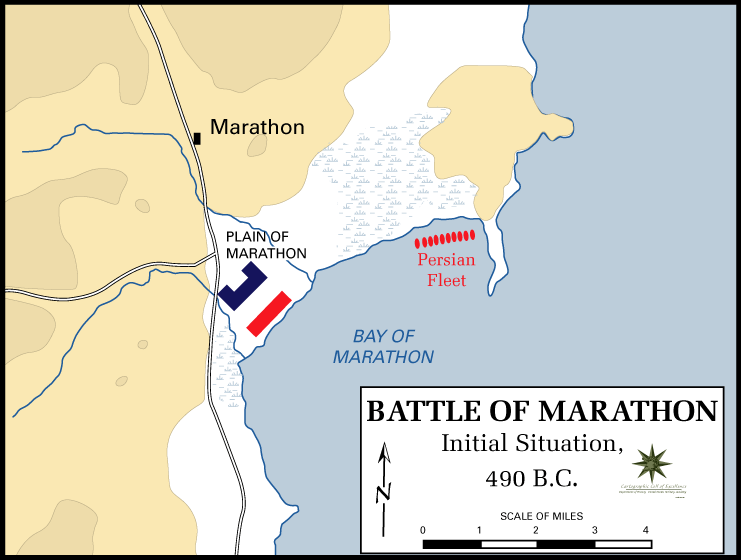 This is an intriguing and sometimes exiting book. The authors give a generous account of this era of History, but then, using reasoned argument and knowledge of ancient tactics, shatter the long-held belief of the "Valiant defender overcoming overwhelming odds. One only has to look at the wonderfully presented maps to understand the territory the Persians would be fighting on. Most of the land around Marathon was flat, marshy and held little cover, while mountains and deep ravines faced them.

The authors also examine the whereabouts of the so-called "lost cavalry". The Persian heavy cavalry were much feared throughout the ancient world, being well-trained, ferocious and famed for their ability in battle. Ancient History tells us that the 1,000 or so heavy cavalry the Persian commander had at his disposal were unused. Our authors can produce historical references to them being used in the weak centre of the Greek phalanx. Indeed, it was the use of the cavalry, that actually was the undoing of the invaders. As they hit the centre of the opposing Greeks, the defenders gave ground. This caused the cavalry to push on thinking the day would be won, but the Hoplites and Light Infantry on the flanks turned into the Persians creating a pincer movement which meant the attackers were fighting on three fronts. Given no choice, the heavily armoured cataphracts of the Persian cavalry turned tail and fled to their waiting ships. 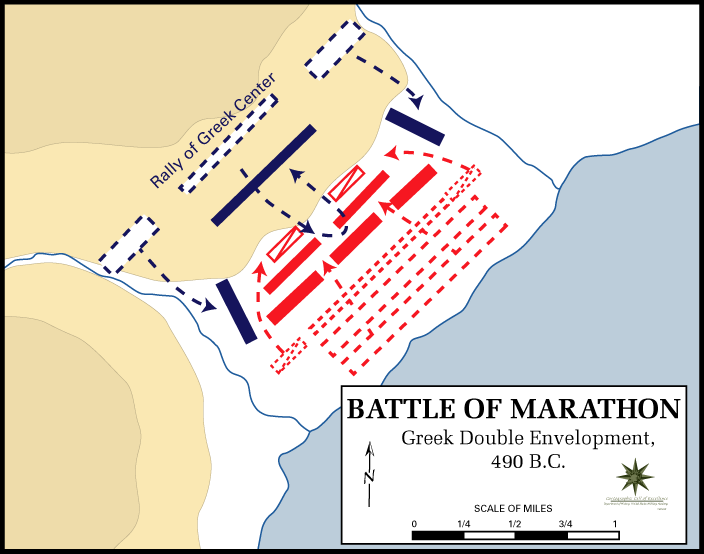 The authors have used a tremendous amount of research in producing this book, quoting one historical theory against a second and backing this up with original quotations. This is made evident by the large collection of notes at the back of the book. Also at the back is an interesting comparison between Marathon and Agincourt, well worthy of a read!

Finally, the legend of Phillipedes running the 26 odd miles to Athens to tell of the victory is dispelled! A courier by the name of Pheidippides was tasked with running to Sparta to request help which the Spartans had pledged. There is, however, no record of a runner being sent to Athens and therefore no record of what the runner's mission was. Runners were certainly used, but considering the distance, they were used sparingly. Using one to announce a victory seems a waste of resources, especially when the chap expires after giving the message!

I have thoroughly enjoyed reading this book. The authors have researched their subject well and present their arguments well, backing them up with facts, quotes and figures. Marathon has always been an emotive subject among the Ancient History fraternity. I feel the majority of questions have been answered, especially that concerning the "lost cavalry". With researchers of this calibre, it becomes a joy to read their theories on how ancient histories were conducted and dispells many of the myths ventured by the ill-informed.

An excellent book containing 8 chapters, 5 appendices, photos and maps, a bibliography and over 100 pages of notes. Every credit to the authors for their persistence and research. I recommend this book to anyone interested in Ancient Greek history.

Marks out of five: A very well deserved 5

An excellent review which gives a good summary of the book.

Smeggers
Thank you kind Sir, I try to be as objective as possible especially with a subject I have recently started studying.
Upvote 0 Downvote
Read more...
Menu
Log in
Register
Install the app
Top