Wellington's Waterloo Allies, by Andrew W. Field. ISBN: 9781399090337
how soldiers from Brunswick, Hanover, Nassau and The Netherlands contributed to the victory of 1815​ 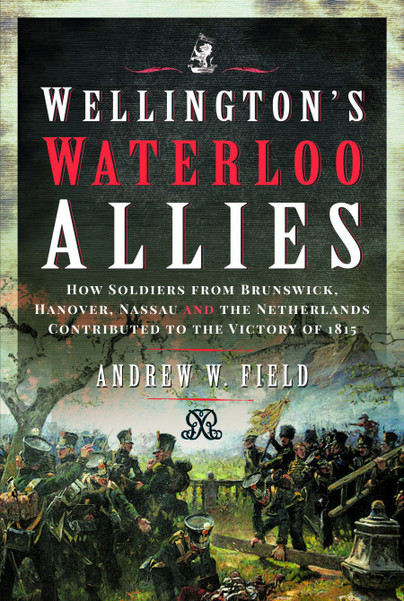 Andrew Field MBE is a former British army officer whose travels around the world have given him a unique opportunity to explore battlefields from ancient history to present times. He has always a special fascination for the Napoleonic Wars; in particular he has reassessed Napoleon's campaigns in 1814 and 1815, and has carried out extensive research into Wellington's battles in the Peninsula. His books include; Talavera: Wellington's First Victory in Spain, Waterloo: The French Perspective, Prelude to Waterloo: Quatre Bras, Grouchy's Waterloo: The Battles of Ligny and Wavre, Waterloo: Rout and Retreat, and in two volumes, The French at Waterloo: Eyewitness Accounts.

For nearly 200 hundred years, mention of the words Battle of Waterloo inspired thoughts of a great British victory over overwhelming odds, causing the French tyrant to flee the field and ultimately his capture. Little was said of the allied soldiers who fought alongside. Those allies, according to eyewitness accounts were distrusted and their abilities as fighting soldiers were often denigrated and vilified by Wellington himself. This distrust filtered down to the common soldier, who already had a deep loathing of "Johnny Foreigner"!

In the last twenty or so years, historians have found, through better access to accounts and archives, that a lot of this mistrust and vilification was unjustly levied at honest soldiers doing the same job as the British but in a different uniform and speaking a strange language. Modern historians have tried to redress this and have been rewarded by the change in attitudes and understanding the significant part played by the allies.

My first thought when I opened this book was "have we got another he said, they said" volume. The reader needs to read and understand this book with a completely sympathetic and open mind. Some of the comparisons are a little hard to read but the balanced and non-partisan reassessment by the author helps to unravel the myths and untruths surrounding the allied nations.

I thoroughly enjoyed the book and learned a lot through the way the author has constructed it.
Field has given each of the allies their own separate chapter; devoted to training, experience and their own military capability. A breakdown of the losses each Allied regiment suffered bear stark witness the fact that these soldiers did not turn and run as is popularly believed. In fact the only regiment criticised for cowardice was the Duke of Cumberland's Hussar Regiment, which is examined in Appendix C.

I would honestly recommend this worthwhile volume to all students of the Napoleonic campaigns and also those specifically interested in the Waterloo campaign. It is also a book that should be added to the "essential reading" lists for anyone interested in 19th century history.