Wellington’s army must be the most thoroughly studied of all periods. A panoply of books looking at the capabilities the doctrine , the command decisions, the uniforms and equipment and more first hand accounts than most preceding wars. They range from original document research to coffee table and Christmas present tat.

A cursory inspection of the title might lead to an outbreak of “So what”. In fact Gabrielle Esposito has produced a concise work that will appeal to military readers, casual readers and modellers alike. The author has produced a number of other works including Armies Of The Late Roman Empire and Armies of Celtic Europe.

The book is arranged in 12 chapters covering 134 pages plus a bibliography and index of regiments. The latter consisting such long forgotten units as The Maltese Provincial Battalions, The Rutlandshire Regiment (58th of foot for those interested) and The Royal Corsican Regiment. 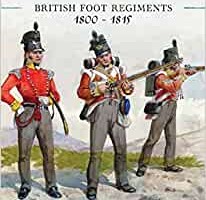 As many a good military book it begins with the Foot Guards and then moves on to us lesser mortals. As well as the mainstream it looks at contemporary British units in Canada , the West Indies ,Africa , India and Australia. There is a chapter covering The King’s German Legion and other foreign troops in British Service.

The list of regiments is comprehensive and as stated above lists some long disbanded units. The section on uniforms and equipment is short but concise. In summary this is a compact guide to the infantry of the period. The illustrations are to a high standard on glossy paper. The illustration of Greek Light Infantry does have to be seen. Printing and bookbinding are to the publisher’s usual high standard. The book seems fully priced at £19.99 but cheaper copies are on Amazon from £14.85