I received this as a pot luck and thought, great, a book about the politics of Iraq that should be fun. In spite of my initial reservations, I’m happy to say that this book made a lot of sense. Emma Sky, the author, was obviously very knowledgeable on the area, having worked there in a variety of roles over several years.

The author was working for the British Council when Iraq was invaded in 2003, and volunteered to go to Iraq to help with rebuilding the country. This was the start of what would appear to have been a fascinating career which despite having had initial good results ended up floundering as the political situation in Iraq deteriorated towards the end of the American “occupation”. This is reflected in the subtitle, High Hopes and Missed Opportunities in Iraq.

She herself is diminutive in stature which is emphasised by the giant of General she spent a lot of her time working with, General Odierno. 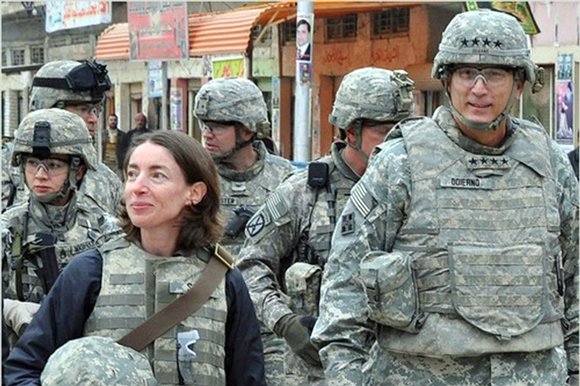 Emma came from a background working in Palestine and Middle East and it would be fair to say she arrived with a mistrust of the Military and the US military in particular. However through the course of her story she obviously changes her opinion fairly quickly and comes to deeply respect their efforts to bring peace and stability to Iraq.

Her devotion to the ideal of a peaceful, stable Iraq comes through on every page, despite the numerous setbacks that are encountered, mainly it appears, from her viewpoint, from the involvement of various American politicians and their decisions which go against the suggestions put forward by the military.

It is a book which goes some way towards explaining how the problems of Iraq came about, from the complete lack of pre war planning to the continued backing of a divisive Prime Minister. It sets out the interplay between the varying factions in Iraq, Sunni, Shia, Kurds, Christian, Arabs, the differences between the secular and non secular at the differing times during the post war period.

As well as giving the overall story of Iraq, the book is littered with many personal anecdotes of incidents, meetings, rockets attacks, living conditions and the like. As well as coming to respect the military, it is obvious they come to respect her greatly as do most of the Iraqis that come into contact with her. This is evidenced by the many invites to their homes and visits that she undertakes.

Her position with the US military seems to have been unique given the fact she was British (at one stage she was not allowed to walk to and from her office in the US Embassy without an escort as she was not a US citizen!) She gave evidence at the Iraq Inquiry and was rewarded with an OBE for all her efforts.

She does seem to be a most remarkable person, and her book is a very worthwhile read. It flows very well, is not a heavy read as some political type books can be, there is a good glossary of the various political parties and militias, there are maps to explain the areas involved and the pages are strewn with photographs bringing the story even more to life.

A good book on the aftermath of a modern conflict, I’d give it 4.5 Mr Mushroomheads. (I had a look on Amazon, the book has 38 reviews, 33 5 stars, 5 4 stars and nothing below that, it’s been a while since I’ve seen a book that well received on there)