The Third Reich in 100 Objects

"The Third Reich in One Hundred Objects" is an attempt to chronicle the history and effect of the Third Reich through a selection of artifacts. This sort of exercise is not usually my cup of tea, as I’ve always felt the effect of producing a list of things seems to be “Look at the shiny”, a superficial overview discouraging in-depth understanding of the subject in favour of a covetous depiction of historic tat. However, as my son is sitting his History GCSE this year I thought some pretty pictures might engage him into the intricacies and mundane horror of Nazi Germany more than dry text books, and put my name down for the review.

This book was somewhat of a pleasant surprise when it arrived. I was expecting a large 10”x13” ‘Coffee Table’ hardback volume, full of stock photos and small captions with very little detail; instead this book, although hardback is a standard 6”x9” format, and whilst there are many colour and black and white plates, each item has at least two pages of notes appended, often more. The selection ranges from architecture to documents and military hardware, and whilst some items are not to my mind specific to the Nazis (for example, stick grenades and the stahlhelm), in general the choices are interesting, and in some cases though provoking. 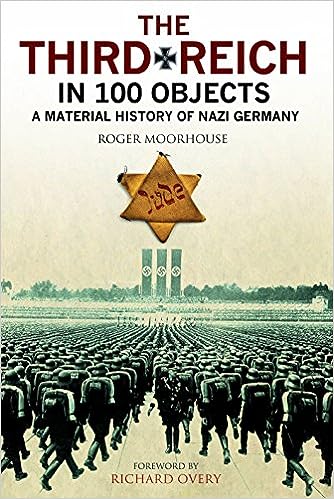 The items are presented in rough chronological order and are an eclectic mix; some unsurprising almost to the point of cliché (the Stuka dive bomber, a Zyklon B canister, a copy of Mein Kampf, the railway arch gateway to Birchenau), some thought provoking (an original score of the Horst Wessel, a Reinhard Heydrich memorial postage stamp, Nazi ‘Honour Temples’), and some just plain weird (Hitler’s moustache brush, Rudolf Hess’ woollen long johns, and a plastic Adolf Hitler toy soldier).

Whilst the information given on the individual items will not satisfy the expert (the passages describing the MP40, the PzKpfw VI and the Bf109 are in no way thorough or especially accurate summations on the capabilities, deployment and performance of those machines), they do serve to give a rough outline of their histories and relevance, without getting too far into the technical weeds. For me, where the book really comes into its own is describing the non-military objects, which are by far the most evocative. A commonplace enamel public sign saying “Our greeting is Heil Hitler” gives a flavour of the pervasion of the Nazi state into every German’s life, and this is rammed home further by the standardised building or street “Block Leader” notice board (reminiscent of so many military notice boards I’ve paid scant attention to over the decades) which illustrates the banality and pettiness of the Nazi regime.

There is of course a large representation of objects directly related to the persecution of the Jews and the Holocaust, but thanks to a general familiarity with them (who isn’t aware of the yellow star or the “Arbeit Macht Frei” gates?) they do not have the impact that they should. A specific exception to this is the Stroop Report (detailing the 1944 crushing of the Warsaw Ghetto), which for me brought the horror and evil of the Nazis into sharp focus.

At a relatively pricey £19.49, this is a book designed to be dipped into rather than read at one sitting, as the description of each object is a stand-alone vignette rather than part of a continuous story. Although it’s not really my cup of tea, I have to admit that it fulfils its purpose well, imparting information on aspects of the Nazi regime both widely known and obscure. Thanks to this book, my son now has a slightly better understanding of certain aspects of Nazi Germany, so 3.5 Mushroom Heads seems a fair score.
Amazon product