'The Slave King' is the tenth instalment in Peter Darman's 'Parthian Chronicles' series. The series follows the fortunes of the Roman-era middle eastern warrior King Pacorus, from his time as a young man taking part in the slave rebellion in Italy alongside Spartacus through a long successful life, leading his country and his army.

Peter Darman started life as a Defence Intelligence analyst before moving across into the publishing world twenty five years ago. His analyst's eye for detail, his military background, and his knack for writing flowing prose come together beautifully in his military historical novels: both this 'Parthian Chronicles' series and his 'Crusader Chronicles' series (set during the lesser-known Baltic Crusades) manage to transport the reader back through time and place them in the midst of gripping action, illuminated by believable detail. 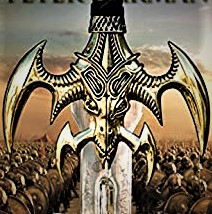 This book finds King Pacorus later in life. Pacorus travels north into what is now northern Iraq: after an intervention from the gods, he finds himself coming to the aid of his nephew Akmon, King of Media (whose capital is the modern Irbil). Pacorus only has an army of one hundred men and one hundred women (his Amazons), but with some Roman know-how, some godly assistance and a defensive army formed from the local townspeople and anyone else who can hold a sling, he must hold the city against the invading hordes.

The book roars along and the action remains as gripping as ever. I'll forgive the godly interventions as they allow an ageing Pacorus to keep fighting at an age when arthritis might have prevented him climbing astride his war horse!

Yet another zinger from Peter Darman. Well worth a read, but do start at the beginning of the series for maximum enjoyment.