The thrilling story of how nine young women, captured by the Nazis for being part of the Resistance, launched a breathtakingly bold escape and found their way home.

As the Second World War raged across Europe, and the Nazi regime tightened its reign of horror and oppression, nine women, some still in their teens, joined the French and Dutch Resistance. Caught out in heroic acts against the brutal occupiers, they were each tortured and sent east into Greater Germany to a concentration camp, where they formed a powerful friendship. In 1945, as the war turned against Hitler, they were forced on a Death March, facing starvation and almost certain death. Determined to survive, they made a bid for freedom, and so began one of the most breathtaking tales of escape and resilience of the Second World War.

The author is the great-niece of one of the nine, and she interweaves their gripping flight across war-torn Europe with her own detective work, uncovering the heart-stopping escape and survival of these heroes who fought fearlessly against Nazi Germany and lived to tell the tale. 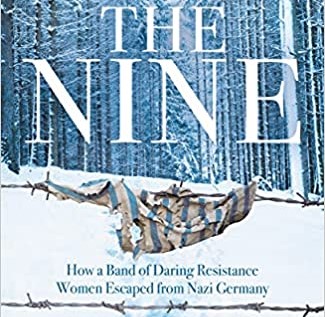 ---------
This story had me hooked by the bottom of page two, I was amazed at the mental and physical resilience of these nine women heroes.

The story is written by one of the grandchildren who had to track down all the ladies, some were only known by a nom de guerre, fact check the data, visit archives, decipher the prison number against a name and travel to talk to the survivors or their relatives. This alone was a herculean effort.

We have in each of the first nine chapters a description of a particular survivor ,their background and then their work for the resistance; how they were betrayed and captured or were just in the wrong place at the wrong time. Every one of them were tortured by the Gestapo prior to being sent to various camps. Then each has her story in the camp and the escape. The escape narrative flows seamlessly and this book is easy to read, but is not an easy read, showing the horrors of being in the hands of the Nazis, where a life could be snuffed out in a moment, on a whim or by design, in the death chambers.

What got to me was the instances of petty assaults carried out by prisoners and camp guards equally. The pouring away of someone's meagre food ration, a couple of guards who thought it "Fun" to find a pretty woman and pull a few teeth out with pliers, the random beatings where a simple injury could lead, eventually, to death. Be aware there are some harrowing reminiscences of what happened to young children and babies.

These women survived by forming a bond of mutual aide and combining their mental strength to keep taking the next step. They had to pass through war torn Germany and its hostile civilian population in order to get to the western front before the Russians closed in on them.

If you only read one book this year make sure its this one to see how the human spirit can overcome most disasters. I give it an unqualified five mushroom heads .