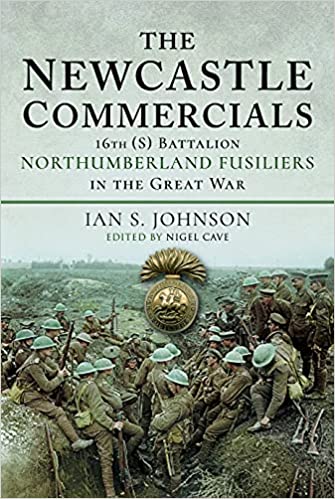 This 667-page large softback brick of a book by a Newcastle author represents the short history of the 16th (Service) Battalion of the Northumberland Fusiliers during the First World War. The sixteenth, first known simply as 'The Newcastle Battalion' and later locally as the 'Newcastle Commercials', is notable as the first civilian-raised Kitchener battalion on Tyneside and one of the first New Army battalions to be sent overseas, presenting a history well worth preserving.

Consisting of sixteen chapters (plus foreword, preface, acknowledgements and a select bibliography), it tells the story of the battalion beginning with the perspective in the north east on the outbreak of war (a good picture of Edwardian Newcastle) and then running through its raising, actions, and disbandment in February 1918, before ending with a brief survey of the later events of 1918, the search for the fate of its casualties, the doings of the veterans and some short illustrated last words. The text is rounded-off by a compendious chapter of appendices including a detailed roll of honour for the fallen, embarkation roll, and honours and awards.

Overall remarkable in its balance of detail and broader narrative (for example the excellent historical accounts, such as that of the inundation of the Nieuport defences, which open a number of the chapters), a particular feature of the work is the effort to get personal accounts by the men serving and period photographs of them. The summary at the end of each recorded period of fatalities over that time and dates of occurrence is also a welcome attribute for the family historian and researcher.

Aside from correcting a few trivial mistakes as to dates, my only thought for improving what is already an excellent work would have been the addition of an index for the benefit of those researching individuals. Notwithstanding that point, this appears to be a model regimental history and I have no hesitation in giving it five stars.