Set in the reign of Queen Elizabeth 1, the story starts with an introduction of what happens when you were once the Queen's physician, but owing to gossip and powerful men having the Queen's ear, can lead to a big downfall.

This actually happened to Rodrigo Lopez who is the subject matter for the prologue. He was accused of attempting to poison Elizabeth and was known as The Jew in the Pew as he stated he was Christian but was found to be a Jew; this caused howls of laughter at his execution when he gave his final speech.

Lopez, whose guilt is still discussed amongst historians, was found guilty of High Treason and was subsequently hanged, drawn and quartered. 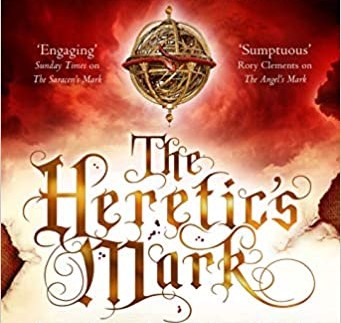 ​
And so the story starts in the year of 1594, Queen Elizabeth is on the throne and she is a supporter of her father's Church of England and England is now Protestant, unlike her sister Bloody Mary a staunch Catholic. There are a few characters in this story, two of which have to flee London after an anonymous source tipped the powers who be that Nicholas and Bianca are indeed heretics, and with the help of Robert Cecil the escape is made that little bit easier. The author takes us on a journey first through London and the S East and then through Europe. Today the journey they undertake to Bianca’s home town will take a few hours by air and car, back then of course it took months. The author paints a picture of what it must have been like to have to travel back in those times, the taverns, the gruelling work of walking mile upon mile with the fear of facing capture and the same agonising and humiliating end as poor Lopez.

Meanwhile back in London, Bianca’s tavern which is South of the river in Southwark, has been burned down and is slowly being rebuilt by a close friend who is overseeing the work. He is also taking it upon himself to find out who falsely accused his friend of treason; will he succeed thus allowing his dear friends to return?

There is another plot within this story in which Galileo features and thus the story has a “hmm, what’s all this about” in a good way about it.

I do like this period in history, the Tudor period has been very well documented both in fictional and factual work and this is a jolly good story and one which I enjoyed. The book is quite a read at over 400 pages in hardback so you definitely get your money's worth.

I’ll give this book 3.5 mushroom heads.

On the whole though if you like a good fast paced story then like me you might prefer the John Shakespeare series of mysteries by Rory Clements and the Christopher Marlow series by M J Trow.