Managing the world’s richest diamond mine in former German South West Africa, Harvey Tremayne clashes with a colonial resistance group, intent on restoring their homeland. They smuggle diamonds destined for the Nazi military rearmament programme. Tremayne got in their way. They killed his wife.

Driven by revenge, his hunt for them takes him to places even more dangerous than the terror-filled trenches of his WW1 service. He’s drawn into the shadowy world of British Secret Intelligence, who are hunting the same enemy but for a different reason.

Amid sizzling tensions, days before World War 2 is declared, the web of intrigue and murder he uncovers stretches from Tangier to the diamond-rich Forbidden Zone in the blistering Namibian Desert. This land is merciless and treats the hunter and the hunted with equal contempt. And offshore, the icy sea guards the land with its own deadly secrets. 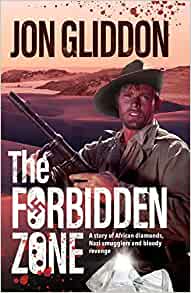 ​
I'm Sorry to say that this book didn't do it for me , A great preposition but rendered rather flatly and with no colour. I know the Author has written some good factual books so I believe that he is just getting into fiction, I have no doubt that subsequent stories will be very good as his settles into a different style of writing. It just did not hold my attention even though I really wanted it to.