The Emperor's Feast, A History of China in Twelve Meals

The Emperor's Feast has attracted exceptionally good reviews in a range of publications. The reviews are justified: this is a fascinating book, which will appeal both to people who enjoy Chinese cuisine and to historians, serious and amateur. The title is slightly misleading; all aspects of Chinese cookery are covered, from peasant cuisine to the elaborate meals served to the nobility and the Emperor, and many regional variations. The author, Jonathan Clements, has a very readable style; history as literature.

Tracing the development of Chinese civilisation through the evolution of its cuisine is an inspired idea, because that civilization is so old: the first use of alcohol has been traced to at least 7000 BC. Serious farming began about 6000 BC and by 4000 BC the Chinese were already growing Chinese cabbage, hemp and mulberry trees (for leaves to feed silkworms). The first reigning dynasty of which any records - not very many - have survived, the Shang, lasted from circa 1600 to 1064 BC. Legend suggests that there was at least one earlier dynasty, the Xia, but no evidence of it has survived.

It follows that, lacking written records, we have to rely on legend, tradition and archaeology, especially the last, to build up a picture of life then. The most numerous surviving early implements are cooking utensils, especially bronze cauldrons. It is possible that the Chinese were the first people to make soups and stews. From an early period eating was accompanied by ritual and ceremony; the higher up the social order you rose, the more sophisticated the food and the more complex the etiquette when serving it. Confucius had much to say on the subject. 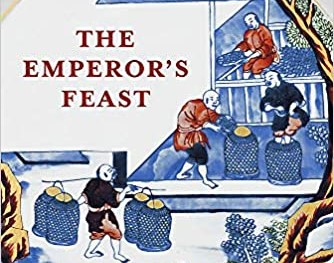 The development of Chinese cuisine was a complex process of cultural exchange; although the Chinese tended to regard other nations as barbarians, they adopted and adapted their dishes. Chinese dumplings, for example, were originally a Central Asian dish which reached China along the Silk Road. The early Chinese staple cereal was foxtail millet; rice became widespread much later. Fried rice was a Mongolian dish that the Chinese adopted. The process of cultural exchange continues; Chinese food is now a worldwide phenomenon. There are over 40,000 Chinese restaurants in the USA alone. Chinese food served in France is different from Chinese food served in London, Hong Kong or Beijing. There was also a military factor; China has been invaded and conquered more than once and the incoming dynasties, Mongol or Manchurian, introduced their own dishes, which the Chinese adopted.

Inevitably the development of food reflects cultural, economic and military history. It is also linked to the development of the Chinese language, which evolves in unexpected ways; a nightmare to translate. To give but one example, how do you address a waiter in Mandarin? Under the Song dynasty you called him 'uncle' (dabo). In Mao Zedong's day you were supposed to say 'comrade' (tongzhi), but that never really caught on. In the 1980s a waiter was xiansheng (Monsieur) and a waitress xiaoji (Mademoiselle). Today, however, these terms are best-avoided: tongzhi has come to mean 'gay', while xiaoji now means 'tart'. If you wish to know the correct expression to use in 21st-century China, buy the book!

Some things in China never change; one is the Chinese Government's megalomania. As far back as the Shang dynasty the ruling elite considered that it was their destiny to conquer and rule the entire world. Today's Chinese rulers are the latest in a long line to attempt this.

Definitely buy this book. Treat it as a Chinese intellectual feast, grasp your chopsticks and tuck in. (Note: In China the term for a foodie is lao tao (literally, an old food-vessel).

Jonathan Clements is a historian specialising in East Asia and the author of, among other things, A Short History of China, The Art of War: A New Translation and Confucius: A Biography. He presented the TV series 'Route Awakening' (National Geographic), an award-winning series about icons of Chinese culture. He was formerly a visiting professor of Xi'an Jiaoting University in China.

I have no great interest in food, and would have ignored this book if I had seen it in a bookshop. However, having read this very well written review, I shall look out for it when the shops re-open.
Upvote 0 Downvote
Read more...
Menu
Log in
Register
Install the app
Top