The 614th was formed in July of 1942 at Camp Carson USA, they were to be equipped with towed anti tank artillery firing a 3 inch round, forming the backbone of the anti tank protection in the coming battles in Europe, however as the Author explains, the towed weapons were really out of date , because the Military had assessed the threat from German tanks to be much greater than it really was. Also these artillery pieces were not as well suited as tracked anti tank weapons, which came later in the war, and provided the ability to move into place and fire quickly. However the men persevered with their training , and it paid off. To have re trained them on the newer tracked vehicles would have wasted time and probably caused greater loss of life, they also used motorcycles and trucks, and many trained and used Bazookas. 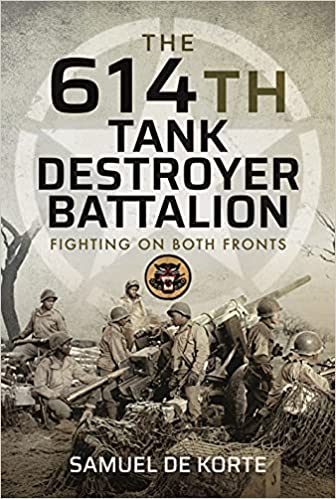 Now the big problem for this Regiment was their colour - they were all African Americans, and had to constantly fight against out of date ideas and overt racism both from the leaders and other soldiers

Many of these young men were share-croppers, and could neither read nor write. In a battle this could lead to loss of life, lacking the ability to read signs and labels on equipment. However they pioneered the buddy system, and most of them soon learnt to read and write and improved their education in many other ways.

As the Author relates, many other Tank destroyer battalions were created, but subsequently disbanded as the war moved so fast and their men moved on to fill gaps in other units , and to retrain for such things as the red ball express.

The 614th really were dropped in the worst of the fighting through France, Belgium and into Germany, where they fought hard and earnt the respect of the white infantry troops of the 103rd Division.

The German Troops it seems were more afraid of the African American troops than the white troops.

This books contains many previously unseen images, and personal stories from the men themselves. The history of the 827th and 679th regiments who were supplied with tracked artillery pieces is included.


At the end of the book the author includes a list of all the citations awarded awarded to the men, and a full list of all those who served.

It is hard to comprehend just how divided both the military and the society of the time were over race, however, by the end of the conflict, many changes were in place and ending of racial segregation in the military was on its way.

Sadly many of the men who returned were ill treated, but with their experience of fighting a war their dignity allowed most of them to flourish and change the views of people around them.


This is a fascinating and well researched book about African Americans serving in WW. Most people only know about the Red Ball Express or the Tuskegeee Airman, here is a much needed review of so many young men who helped to liberate Europe.

An excellent read, and full of previously unseen images and personal stories.