Remember those days of having your poncho strapped to four trees, cowering beneath it in your bouncing bomb trying to survive the wind hitting you from all angles? Remember the joys of trying to get to your stag position and tripping over a dozen other bungees and bits of paracord hanging from other Wendy Houses strung up around you?
Well wave goodbye to all that with the indulgent and some might say jack, Terra Nova Jupiter.

Coming in at a heft £250 direct from Terra Nova It's a 1 man bivvy tent (Hence the jackness) which incorporates the latest in fabric technology to provide a complete solution to your outdoor shelter needs. 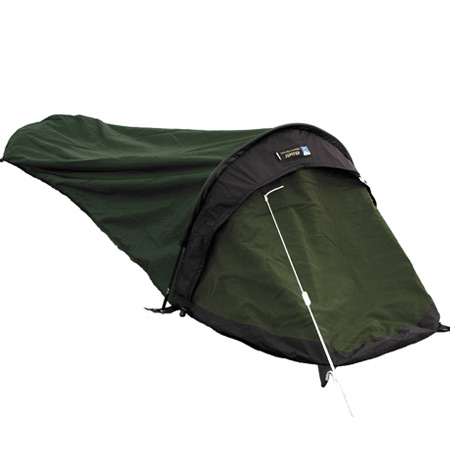 ​
This means that the tent is made with Gore-Tex FLO sheeting which is gas permeable, or in laymen terms, it lets all your nasty body gases and expelled breath out, preventing condensation & carbon monoxide build up inside. It also includes a No-See-Um mesh door which sits behind the solid fabric door, so you can have a choice of fully sealed in, or open with the mesh up to gaze at the night stars and passing tracer whilst keeping those Mosquitoes at bay.

The hood itself can be fitted with a half moon pole support to keep the top half upright and thus creating a spacious area inside at the head with which to conduct a degree of personal admin, or to store kit without having to fumble around for it. Actually putting the poles in takes about a minute, if that. If you erect the hood you can also peg it down with the trailing lines which come off from the head.

The door at the front is secured via zip, with an overhanging flap to allow water run-off and prevent seepage.
Once securely pegged in with all six available peg holes, the whole structure becomes very solid and can take a serious battering from the wind.

The groundsheet is also as would be expected, waterproof and resilient to rips and tears. This was proven often enough when it was used without a roll mat or underside padding in Afghan - be it on top of stones or other miscellaneous debris, it survived intact. Terra Nova advertise it as a Waterbloc Groundsheet, which whilst it doesn't specify if it's actually fully waterproof, was good enough to let me lie down half in a puddle and sleep comfortably enough without any water entering in during the night. I take that to mean it is!

The storage option is a basic waterproof bag into which you can store the rolled up bivvy. With all best intentions that just became too damn fiddly, and so it ended up getting stuffed into the bergen whilst still holding the dossbag inside. This made it a job of seconds to pull it out, shake it out, climb in and zip up, giving you complete protection from the elements.

So what is it actually like to sleep in?

To get in you simply open the hood, sit in it, wriggle down a bit and that's you. At 6ft my head was more or less at the start of the 'porch' area of the tent. Once I pulled the zip up and closed myself in partially, I had a good bit of space to play with at the front.

As mentioned, once you're in, you can either zip the front up completely, or leave the mesh hood up and have full view to your front. With the bag zipped up you are not only warm, but the wind doesn't manage to find an entry point regardless how much of a gale is blowing. There are two zips on the hood runner so if you decide you want some fresh air in you can adjust them to whatever angle you like, partially open them apart and not risk any seepage.

The Jupiter retains heat well, often finding it more comfortable in early Jan-Feb in northern Helmand to actually sleep on top of the dossbag due to the heat inside. Again though, if you get too hot, you just open the zip a touch.
If you've gone for the fully erect setup you can quite comfortably eat scoff, drink a brew, read a book or even clean your weapon parts in the hood. It's not the Tardis, but there is enough room, and considering how difficult it is on the ground to find somewhere to clean kit where the sand and dirt wont get into it, the hood soon made itself the easy answer.

If however you've gone for the quick and easy option of just shaking it out and climbing in, it gives you that much needed insta-shelter. It's a glorious feeling when you've gone into harbour for the night, the rain is chucking down and whilst the rest of them try to fasten ponchos up you just jump right in and zip up. Waking up in the morning to see everyone else drenched and you're fresh as a daisy is priceless.

The only slight problem I had with the quick method was if you tend to toss and turn when you sleep you can wake up in pitch black and not have a clue where the zip is to get back out. I won't lie and pretend this didn't cause me some night-time terror as I struggled to find my way back out again. By terror, I mean that 'just woken up, not quite sure where I am, it's pitch black and I'm shitting my pants in fear' kinda way.

The other small issue that arose from time to time was that the zip would sometimes get caught on the fabric. Not a big deal and even having to wrench it back out didn't tear it.

There is no padding in the base, so sometimes you might want to stick a mat of some sort down first, but even as is, lying in or on a dossbag made it comfortable enough.

The Jupiter is pricey, exceptionally so, but it depends entirely on what you want and what your demands are. If you can get away with it on exercise, it's ideal, but in theatre where time is precious it's a fantastic solution and one that both myself and about another dozen lads decided to buy into. The jealousy was tangible in the rest!
However, if you're thinking about buying it for use in the UK on training or exercise, be warned, it's not good team play to have a Jack Bivvy, check you'll be allowed to use it first as they may want you to hold hands with someone over the Hexi TV in your Wendy House instead.

So overall, an expensively indulgent but incredibly efficient and effective shelter that is light, durable and protects you from the elements at your weakest time.

Top Tip: If you do want to purchase this for military use and can provide a military address for delivery it may be worth getting directly in touch with Terra Nova for a substantial discount.

Editor Note: This was written back in 2009-2010, as we took delivery of the bags out on tour. Bless Terra Nova's wee heart, we bluffed them for massive discounts and they fell for it hook, line and sinker. Lovely people though, and the Jupiter is amazing. It's still in one piece, it's up in the attic and still gets regularly used. I loaned it and my old bouncing bomb to a colleague for one of those Big Sleepout things where they all pretend to be homeless for the night. Unfortunately for her, she completely missed the point of it and came back saying she'd had the best nights sleep in months thanks to the Jupiter, as the weather was cack.

If you need a bivvy, or if you solo camp and can't be arrsed with a tent, buy this.

MrBane
Yes, that's the one key point to bear in mind however, it's worth noting that it's an excellent replacement for your issue bivvy bag anyway - just ditch the poles.

It got plenty of use in that format as well, and the zip was a massive boon.
Upvote 0 Downvote
Read more...
Menu
Log in
Register
Install the app
Top