The M10 Wolverine tank destroyer was America’s first successful tank destroyer. It was called the Achilles by the British, who fitted it with a better main gun.
Originally, the M10 used the chassis of the M3 General Lee/General Grant medium tank. A later model, the M10A1, used the chassis from the M4 Sherman medium tank.
The M10 weighed over 28 ½ tons and could move at a speed of up to 30 miles per hour (48kph).
Unusually for an American vehicle, the M10's five sided turret had an open top although a canvas cover was provided to give some measure of protection from the elements.
The main armament on the Wolverine was a 2.99 inch (7.62 millimeter) M7 gun. A counterweight was placed in the back of the turret to keep the gun balanced.
Five crew members were needed to operate the M10.

The Achilles was the most successful version of the M10. On the Achilles, the British replaced the 2.99 inch M7 gun with a 17 pounder Mark V gun, the same gun that was used on the Challenger A30 and the Sherman Firefly. Although fitting the Ordnance Quick Firing (OQF) 17 pounder to the M10 turret presented far fewer problems than it had with the M4 Sherman, the barrel was slightly smaller than the standard 3" gun and so an armoured collar was welded to the M10 gun shield. This collar, and the large two-piece counterweight attached to the barrel, helped to offset the problems with balance caused by the heavy 17 pounder breech. A bump stop was welded onto the turret roof behind the gun shield reducing the maximum elevation to 20 degrees and a hole was cut through the gun shield on the left-hand side to accommodate the direct sight telescope.

New ammunition racks were installed to hold the 17pounder ammunition with six rounds carried in the turret and a further forty-four stored in the hull sponsons. Other peculiarly British additions to the turret interior were four Sten guns and a number of hand grenades held in boxes, a binocular case, a handheld rangefinder, map boards, signal flags and a methyl bromide fire extinguisher. 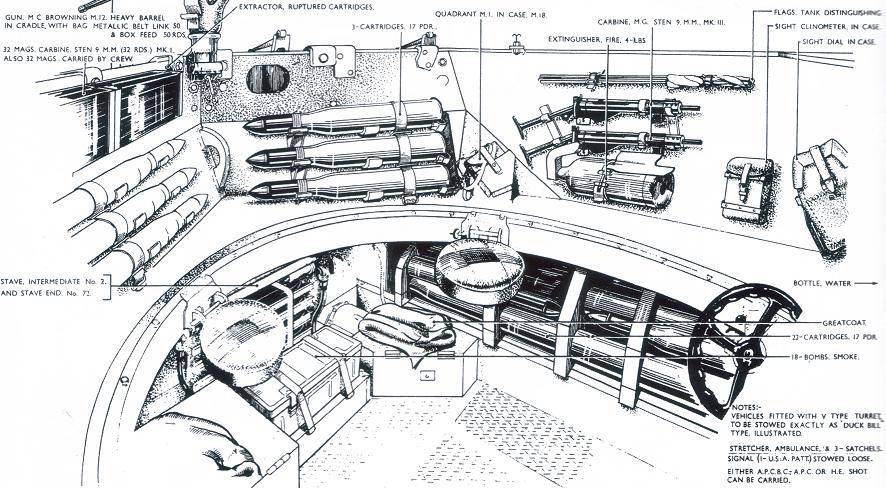 Between September 1942 and December 1943, five thousand M10s were produced.

This book is a model-maker's dream. Not only does it contain excellent pictures of the vehicles involved, it contains an interesting timeline from D-Day (6 June 1944) until the German surrender in 1945. There is a breakdown of the Anti-Tank regiment giving details of the oft-times confusing tactical signs used by the Royal Artillery; an inventory of arm-of-service signs for British A/T regiments in NW Europe 1944-1945 and a collection of walk around views of several models in 1/35 and 1/48 scales. a good catalogue of modelling products related to the vehicle is found at the rear of the book. The final section of the book deals with Aspe t-shirts of the British Army, explaining some of the military nomenclature which might confuse those who haven't served.

Throughout the book, the author has included brief descriptions of the Anti-Tank regiments of the Royal Artillery that served in Northern Europe during the last years of the war.

This all makes for some very interesting reading and I must admit, not being a gunner made this all the more interesting for me. I have finally cleared up several mysteries concerning the rather obscure numbering systems on the unit/formation signs which the Artillery lads dreamt up to confuse the rest of the Army. As well as excellent drawings, their is a wealth of action photos, maps and information. This book will be of enormous value to anyone wishing to build a model of the Achilles or even the M10.