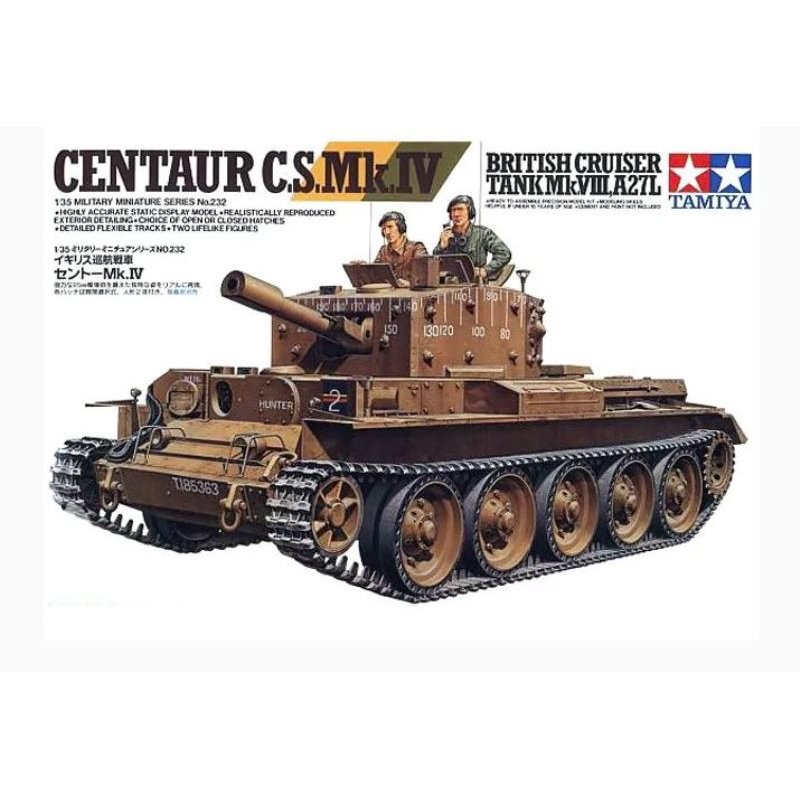 History
Designs were requested by the British Army, in July, 1940, for a new heavy cruiser tank to replace the A15 Crusader. Three designs were proposed, the A23, A24, and A27. The A23 was rejected; the Nuffeld Mechanisation & Aero Company's A24 would later become the Cavalier. The Birmingham Railway Carraige & Wagon Company proposed A27 was powered by the Rolls Royce Meteor engine, which was based on the Merlin Mk.III airplane engine. Unfortunately, the Meteor engine couldn't be mass-produced at the time. Due to this shortage, Leyland Motors proposed a new tank named the A27L that could be powered by either Liberty or Meteor engines. The A27L was renamed the Centaur and the A27 renamed the Cromwell. The prototype arrived in July 1942. Production started one month later. The prototype revealed a serious flaw of the Liberty engine; it shook apart at high revolutions, relegating the Centaur to training duties. The Centaur Mk. I was equipped with a 6 pounder anti-tank gun. The Mk. II rode on wide 15.5 inch tracks. The Mk. III used the 75mm gun, but the Mk. IV close support tank employed the 95mm tank howitzer Mk. I. The howitzer used three types of ammunition, smoke, high explosive, and high explosive anti-tank. The effective range of this weapon was 2,500 meters. These tanks were the only tanks to have been used by the Royal Marines and the only centaurs to go into battle.
The Centaur Mk. IV At Normandy
After the 1942 Dieppe raid, the Royal Marine Division refined the techniques for combined operations, such as assault landings on enemy fortified beaches. The division was later disbanded, but the Armored Support Group it proposed was formed in early 1944. The ASG was responsible for providing fire support to the infantry units used in the initial assault on the Normandy beaches. The tanks would fire their guns while offshore in their landing crafts; they would then land and continue their work from the beach. To assist the fire support, white degree markings were placed on the turrets. The markings could be read by binocular equipped spotters, this helped align the turrets even if smoke obscured the direct line of sight to the target. The ASG was dispersed along the three landing areas of the 2nd British Army, Gold, Juno, and Sword beaches. The Centaurs were used to destroy beach-obstacles, pill-boxes, and other strong points that dotted the beaches. The ASG were ordered to stay on the beaches, but the Royal Marines ignored the order, re-grouped and were soon driving inland attacking targets of opportunity. Forces engaged were the German 711th and 718th Infantry Divisions. There were also some clashes with the 21st Panzer Division. As the beachhead was consolidated, many of the Royal Marines , including the ASG, were withdrawn back to Britain. All were reported to have left Normandy by the end of June. 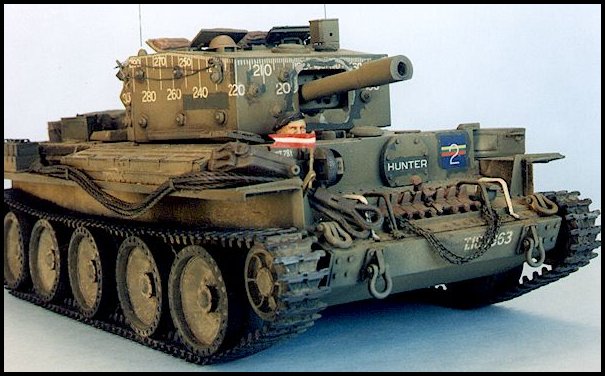 The Kit.
This kit comes close on the heels of Tamiya's earlier Cromwell Mr. IV kit no. MM 221. This new version has a different turret and gun on it, housing the 95mm mentioned in the above history. It also features a second tank crewman figure. There is no hedge cutting device in this new kit like there was in the Cromwell kit. There is even a nice gun breach for inside the turret - but other details will have to be added there.

The kit consists of approximately 229 dark green plastic parts. The molding is crisp and sharp and no flash is evident anywhere on the parts. Also included are 18 rubber polycaps for retaining the road wheels, a small square of plastic screen material for the air intake on the rear of the Centaur, a length of white string to fabricate tow cables from, and a tree of clear parts that are labeled as 'G' tree - but I fail to find these parts anywhere on the instructions??? Some of these clear parts look like they could be goggles for the crewmen, but the rectangular pieces puzzle me - periscope lenses???
The decals consist of two different vehicles . . both sporting the degree marks on the turret, that are mentioned in the above history. 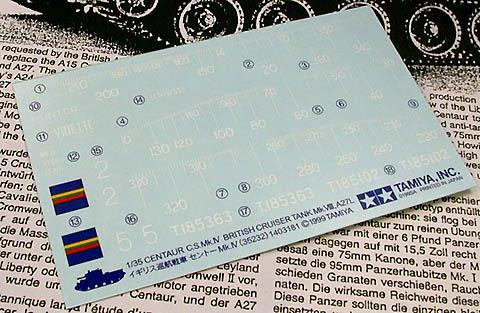 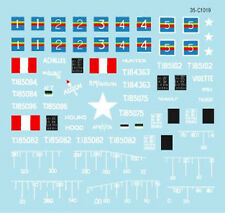 This vehicle can be built with many of the hatches either open or closed. The boxart is a excellent color guide and has profiles of the Centaur printed in color on the side panels.The kit shares most of its components with the earlier Cromwell. A new sprue is included with the parts for the 95mm gun, different ventilators, and the gun sighting mechanism. Also new are the roadwheels, this time with lightening holes in the rubber portion. An extra crew figure is also included and has excellent detail.
What the kit doesn't have from the earlier Cromwell kit is the Cullin hegerow cutter and the exhaust shield. The turret parts and the clear parts are the same, but this time you don't use the turret spotlight. The fit overall is very good, and the separate turret and lower hull outer walls fit very well. The suspension arms are positionable by the removal of a locating pin. For those of you who have built the Cromwell, well, you'll know what to expect. I opted to use the figures in this kit as they are VERY nice indeed. 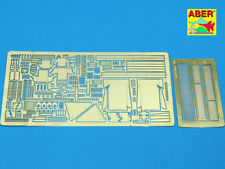 The Hull
The lower hull consists of the separate road wheel arms, road wheels, and the outer double walls. The roadwheels arms have molding seams that need to be removed. You'll be better off, painting the walls of the inner and outer walls before attaching them as this makes painting A LOT easier. At this time, you must decide whether you want to use the internal or external track tensioning system. I used the external one as my references said that the version I built had that. The tracks are the glueable type and have nice detail on both surfaces. I decided to paint the roadwheels before attaching the tracks, to make painting easier. The rubber portion were painted with lightened black, and the metal parts were painted Tamiya Flat Earth, and then oversprayed with a thinned down Olive Drab. The tracks were drybrushed with silver.
The upper hull has all the hatches positionable to enable a complete engine and crew figures to be fitted. You don't use the hull machine gun on this version, and I'm not sure if any Centaurs had one. Tamiya provides the necessary cover for it. The hull has the front and rear armor plates separate, to allow for maximum detail. The cast effect is VERY nice, and looks really like rolled armor plate. A mesh screen is provided for the rear engine intake, and separate PE parts for these screens are sold by Tamiya , which I hear are VERY nice!! This time I didn't add the side screens, as I did on my Cromwell, as I now know better, and they wouldn't show anyway!!! All the detail parts are very nice, but some have moulding lines that require removal. 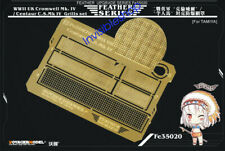 The Turret
The gun is different than on the Cromwell, but the 95mm gun is at least as nice as the 75mm on the Cromwell. You don't use the spotlight or the external sights of the Cromwell. A new sight for the 95mm gun is provided, which is basically a box shaped structure, that goes on top of the right periscope.
All of the turret parts fit well, and I had no problem with them. A word of warning though, apply the decals for the traverse numbers BEFORE the bolts with the hooks on the turret sides!! I learned this the hard way and screwed up some of my numbers on the decals.... You don't need to paint the turret interior if using the crew figures as I did. I painted the figures with acrylics and enamels with a black wash and drybrushing for the clothing and a brown wash for the skin. The only thing I added to the model were the intercom wires for the headphones on the figures!

Painting and decals
I painted the model Tamiya flat earth with a top coat of thinned down Olive Drab, with gun metal for the MGs, and white for the outer light guards. The tools were painted Gun metal and flat earth dry brushed with desert yellow.
The decals were applied to a gloss suface, with decalfix. The decals are very thin and require care and patience. Especially the degree marks for the turret sides. 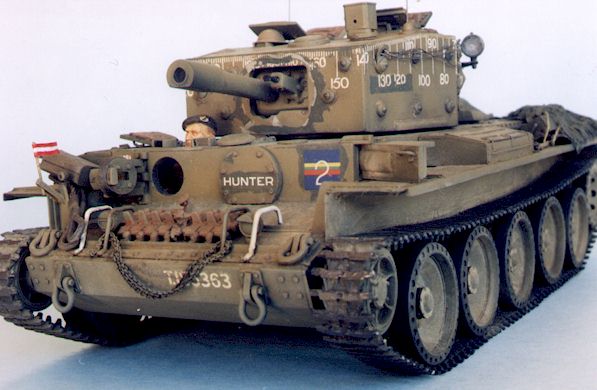 A nice model of one of the "forgotten heroes" of D-Day. Excellent figures, nice moulding and a good choice of decals; what's not to like? I do think Tamiya haven't done their research properly regarding the pain finish of the model. As far as I'm aware, all Allied vehicles used during D-Day were either Olive Drab or Olive Green, not the brown they claim for the Centaur!

Rating: four and a half out of five.