On the 10th of July, 1943, the largest amphibious operation ever was mounted. This was Operation Husky, the invasion of Sicily and the Allies first large scale attempt to carry the war to occupied Europe.
Over 160,000 troops - British, American and Canadian were landed by sea or dropped from the air in the assault. This was more than were used on D Day, in June 1944.
The allies had been victorious - although at great cost - in the North African campaign and it was this victory that gave them the springboard from which to launch the attack. The northern parts of Africa - Tunis and Algeria, along with Tripolitania - were ideally situated to offer a jumping off point and that, along with Malta, which island had recently been relieved and was now heavily garrisoned, provided the airfields that were so necessary for the air campaign, made the operation seem feasible.

Malta, as is well known, had suffered tremendously from Axis attacks and had been under siege for a long time. The success of the relief convoy ( Operation Pedestal) had given the island's defenders some breathing space which allowed the Royal Navy and the air forces to lift the siege and push the Axis forces back.

The Sicily campaign relied on the Allies gaining air supremacy, and the airfields on Malta and the smaller island of Gozo were essential in this. This supremacy was essential; the planners for Husky were determined that an unrelenting air campaign should precede any attempt on the Italian assault, and should also be able to dominate the skies during the landings and subsequent breakout from the beaches. This dominance was achieved and proved to be a template for future operations.

The campaign was to be a brutal and violent affair, the heat and dusty conditions were something of an inhibiting factor, especially when combined with the stench of rotting corpses. The infrastructure of Sicily was primitive, with few serviceable roads and little in the way of efficient water supply. Transport for the Sicilians was still very much of the horse and cart era, with tracks little wider than the carts. Roads and streets in the towns and villages were narrow and crowded, having the effect of causing choke points where least convenient. The interior was mountainous, with Mount Etna looming over the Island, a reminder that this was still a semi-active volcano.

The stage was set and the players as ready as they could be, but there were conflicts amongst these major players; the personalities of Montgomery and Patton providing tensions that had to be dealt with diplomatically. And then there was the Honourable Society, the Mafia as we know them. Deals had to be done and cooperation secured. The weather had to play it's part and all had to come together to ensure victory.

Their is a familiarity in the cast of this book, names that are readily recognisable. From the generals and admirals via the civilians to the privates. Names like Eisenhower, Roosevelt, Montgomery, Churchill, and for the elders amongst us, Douglas Fairbanks Jnr, Ernie Pyle and Audie Murphy. And, Paddy Mayne.

James Holland is an accomplished historian, a best selling author and a popular broadcaster. He has a knack for writing history and making it fun as well as informative. His books read much like a well written novel and his research is impeccable. The voices of his characters are not just the Generals and the Admirals, the politicians and the Presidents. Holland gives us the words of the rank and file, the junior officers and the private soldiers. He brings their words to life as he does to the background and plans of the operation.
The book has a plethora of maps and photographs, all of which help to make sense of the campaign, and he provides lists of the main characters that we meet on the journey.

An excellent book and valuable guide to the Sicilian campaign, it lays out the background well and takes one through the journey instructively. A great read and a book that anyone with an interest in the war should have. 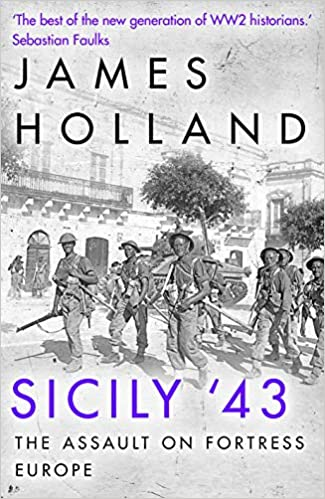