In this short (173pages) but very informative book Simon Elliot looks into the mystery of the IX Legion, it's broken up into six chapters.

The first two give a concise but thorough look into the Roman military and Roman Britain, the next three go into the 3 main theories for the disappearance and the final chapter is the author's conclusion as to what he believes happened.

The first two of the theories each set in Britain is the of the legion being destroyed in Britain, possibly in Scotland , which has been the usual explanation. But more recent archaeology (including evidence that London was burnt to the ground and dozens of decapitated heads) suggests a crisis, not on the border but in the heart of the province, previously thought to have been peaceful at this time. What if IX Hispana took part in a rebellion, leading to their punishment, disbandment and damnatio memoriae (official erasure from the records)? This proposed ‘Hadrianic War’ would then be the real context for Hadrian’s ‘visit’ in 122 with a whole legion, VI Victrix, which replaced the ‘vanished’ IX as the garrison at York. 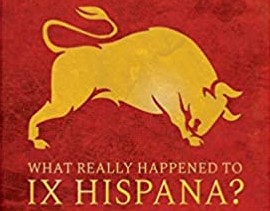 And the final theory is that legio IX Hispana was destroyed fighting on the eastern frontier, Simon Elliott then again, as before with the Rhine/Danube frontier, lines out all encounters of the Roman with the Parthians in the east, and one legion is known to have been lost there.

Finally, there is a summation of these events and the author reaches a conclusion, which you'll have to read for yourself no spoilers here! I agree with his conclusions on the evidence he's presented here. I am of course not the scholar he is, but the case is pretty watertight, providing he's not left out any information of course.

There are one or two trivial errors in the book, including the old canard about sword blades being grooved "to let out blood and stop them sticking" but those can be lived with, even though that one does drive me mad. Overall an excellent book, well written and not at all dry reading.