The Rab Neutrino Pro Military - a modern take on their classic jacket with input and investment from Trekitt of Hereford. Watch the video below, have a shufty at the written review, and then if you fancy winning your very own £270 jacket (and who doesn't?) head over to the competition thread HERE!

​
The Rab Neutrino Pro is a long-established jacket with an excellent sales record to match, especially to those in the military who want a top-spec, high performance Down jacket to keep them cosy whilst bimbling about in the field.

Trekitt, those retailers of a multitude of outdoor and tactical wares, knew this, but also knew the jacket could be just that little bit better. So, having approached Rab and offered some suggestions, they were given the option to fund a complete production run of 500 of the Rab Neutrino Pro Military jackets.

That’s quite a gamble for any company – the financial investment is significant and it of course carries a high level of risk with it. It therefore begs the question, is the jacket worth £270 with the changes Trekitt have implemented?

First of all, the Rab Neutrino Pro Military is available in Small, which is a 37” inch across the chest, up to XXL which is a 48”. It’s only available in black, and as noted, retails for £270 direct from Trekitt and only Trekitt. This is in effect a limited edition run. 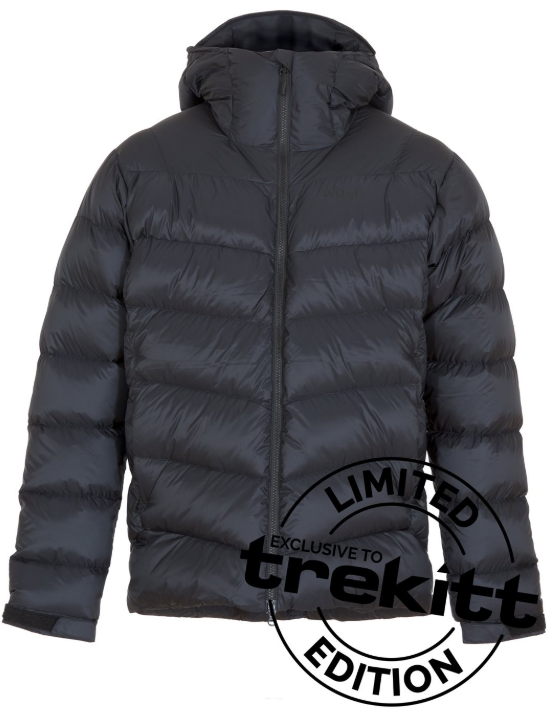 Starting with the look, the first change from Trekitt is that the black colour of the jacket has been enhanced to a ‘discrete’ level by the removal of the shiny Rab logo, having it replaced with a dark grey version, close to the jacket’s black. This means you’re not getting night light reflection off the logo which was an issue previously. Interestingly enough, this was also the hardest change to implement due to brand protection, etc.

The jacket looks as good as it always has, still utilising a stitch-through baffle construction. This gives it the seamed look and it basically means the outer material has been stitched directly to the inner material, creating baffles or compartments for the Down to sit in.

This stitching technique can sometimes result in a jacket which isn’t as warm as a version with a box construction (big sections rather than the compartments version you get from the baffles), but this is more than taken care off by the quality of the Down that’s been used.

The jacket is filled with Certified European Goose Down which is hydrophobic, and each cluster has been treated with Nikwax to give it the hydrophobic feature. This is a major change for the Neutrino Pro – the original wasn’t hydrophobic and so, whilst a good jacket, drank water like a desert Camel. As soon as it rained, the jacket would absorb the water, the feathers would absorb it, and the heat retention would pretty much fail, leaving you with a heavy and lumpy jacket.

The Down is rated to a Fill Power of 800, 900 being around the top of the table. The Fill Power relates to how many grams of feather are required to fill one cubic centimetre; this means that the feathers are nice, big elongated feathers that capture a lot of air and insulate really well. It also means the jacket dries very quickly.

The outer material is made from Pertex Quantum Pro – a 20 Denier material with a nylon rip-stop layer in the middle. It’s rated to 1000mm Hydrostatic Head for water repellence. To ascertain this figure of 1000mm, the fabric is wrapped skin-tight around a cylinder which is placed in a tank of water. The water level is increased and the rating comes from how much water the material can resist before the pressure and weight of the water forces its way through the fabric. 1000mm means it survived 1 metre of water.

A higher number such as 2,000 means better levels of protection but also lead to a heavier jacket. Overall Rab have gone for the best warmth to weight ratio possible by combining high Fill Power with a decent Hydrostatic Head rating. The jacket because of this is light to wear and compresses down to a decent size, and it’s also breathable thanks to the Pertex – you’re not likely to find yourself soaked in sweat with this jacket even with a bit of activity and movement.

The zips on the outer pocket and front zip are YKK, and the pockets are big, deep pockets that’ll easily take a thermos. I conducted a highly scientific experiment and could fit eight tennis balls in each pocket, just in case you’re one to be invited at short notice for mixed doubles!

All the zips are made from water repellent material and the main body zip has a sacrificial liner to prevent water ingress but also stop the zip from catching on the jacket.

Inside, you have two mesh dump pouches. Again, deep and generous spaces that’ll take a brew mug or ten tennis balls each! This is one of the key features of the Trekitt take on the jacket. It works really well, and even with both inside pouches filled and outer pockets filled, the jacket never feels at bursting point. 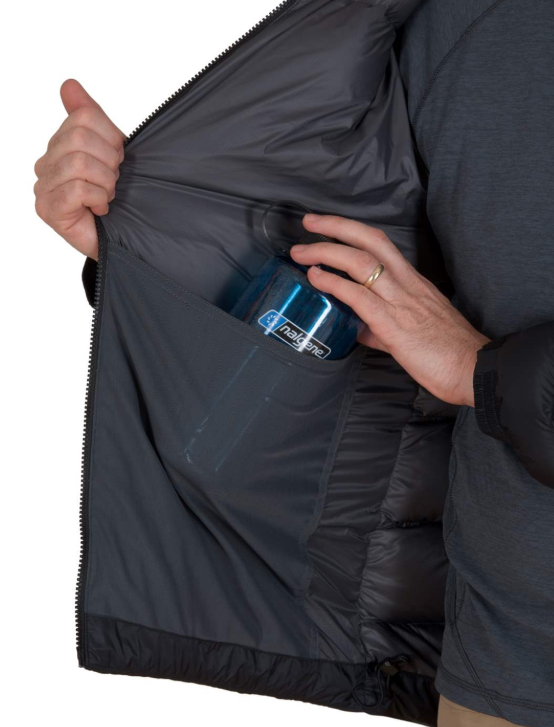 ​
The hood of the jacket is filled with the same Down as the rest of the jacket, which is a really nice touch. It creates a warm, comfortable space and shows the thought put into it – often the hood is just some flaky material with little effort. It’s got two pull-tight toggles to close the hood down and you can really burrow down in there for almost complete protection from the elements.

The overall wear of the jacket is great – it’s comfortable, light and looks bloody good. It’ll protect you from light rain and wind driven snow and I’ve had it out in the rain, still dry inside and still a light jacket. It dried out in minutes as well once back indoors. The wind doesn’t breach it either, so it provides a really snug shell to hide in. On that note, if you’re expecting heavy rain, do take a shell with you – remember, it’s water repellent not water proof.

So £270 is a lot for a jacket, let’s not muck around with that. It’s Rab, it’s a brand, but it also has pedigree to support that price. More importantly, this is something that’s been brought to the market by Trekitt who feel it’s a smart move and gives the jacket that little bit more relevance to our industry.

If you want a Down jacket, sure, you can buy a £30-£40 jacket, but you’re kidding yourself if it’ll perform as well as this combination of Down and outer fabric.

If you’ve got the money to spare, this is a recommended purchase; the only thing I’d suggest is that it comes with a basic stuff sack. Spend a few bob and get a dry bag with rip-stop or something similar to give it that robust protection when transporting and stowing it.

If you want one, head over to Trekitt to find out more, or alternatively, take a shot at getting a free one and enter our competition HERE!