Someone in the reviews office at Arrse GHQ must have realised I have a passionate interest in the Napoleonic Wars, and to that end, sent me a copy of this book. On first impressions, I thought it would be a biography of the gentleman; how wrong I was! This is more a potted history of the 92nd Highlanders in Denmark, Peninsula battles and Waterloo. Private Campbell does get an occasional mention, usually when he was wounded, but nothing else.

What I do like about the book is the attention to detail paid by the author. His research comes from letters written by soldiers who were actively engaged in any of the conflicts; so there appears to be some veracity to conditions of the poor Highlanders who went for days on end with no food, boots falling to pieces and uniforms held together with patches of any cloth available.

There is no real story as such, just a collection of events collated into a book with added photos and maps. Unfortunately, the maps do not come over as being easy to read due to their size and the need for a magnifying lens to acquire any detail. The same could also be said for the photos. They are nearly all photos of paintings, so don't accurately portray the way the highlanders lived. This is a shame because some decent pictures would actively enhance the book. There are one of two line drawings which are fairly good, but again, we are stuck with the artist's view.

This was a book I was looking forward to and I'm afraid, for me, it fell on it's face. As a biopic of a solitary soldier it didn't work, although as a pocket history of the battles mentioned, it was very good. What I did enjoy was the descriptions, warts and all, of the conditions the men had to suffer, and despite so many things going wrong for them, they remained cheerful and well-disciplined to the point where their divisional commander, Lt. Gen. Sir Thomas Picton, complimented the 92nd on their good behaviour towards the civilians around Waterloo and other areas. 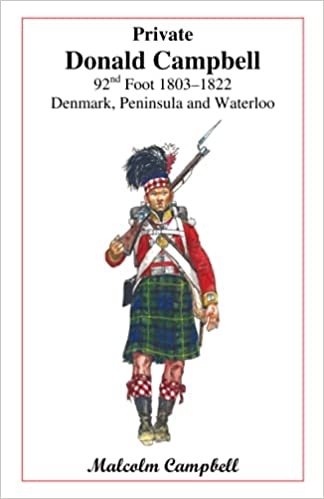 If you wish to read a short history of that time in Britain's military machine, this is an ideal book for you. If, however, you want to read a biography, you'll be disappointed! This book could be used for research and is illustrative enough for the student of military history. I was not impressed and would only rate it as two-stars for it's historical content.