I started to read the book and before many pages I felt that I was reading a novel. The book is about two Female pirates that started making waves in what was very much ‘a male world of piracy.’ 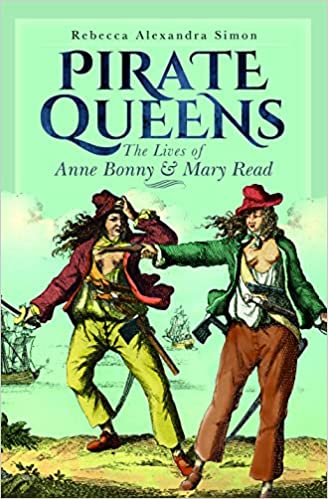 I was looking for ‘Blood, guts and the wielding of cutlasses’ But No! The first chapters are about the ‘word for word’ detail of an Irish Lord of the manor bedding Anne Bonny’s mother and that Anne Bonny was illegitimate, such is sheer romanticism, as nobody knows the conversations between private people of over three hundred years ago. Also there is discussion whether or not the two female pirates were lesbians… this is a modern assumption of which I, and many others just don’t care!,

I enjoyed the historical part of the book, and indeed learned from what must have been a lot of research on the author’s part. The two female pirates were eventually captured with their male counterparts and duly sentenced to death by hanging. World piracy at the times was governed by; British Maritime Law’ The males were duly hanged, but the two females were imprisoned because they claimed to be pregnant, which they were. In the days of death by hanging, or any other method, it was deemed that the child had committed no crime and therefore should live.

In the case of the male pirates, they were subjected to the short rope. This was a system of no drop, but just being suspended by the neck on a short rope. The term of the day was called ‘The Marshall’s Dance’ where the body just ‘twitched’ with violent jerks of the arms and legs until life expired- sometimes ten minutes. When the Marshalls dance was being imposed, these were great social events, whereby up to ten thousand people attended. The hanging was often carried out at Wapping on the River Thames, apparently there is a look-alike gallows on that site today.

I award the book 3 mushroom heads, mostly for the research, but the romanticism and assumption ruined it for me.