Peninsular and Waterloo General; Sir Denis Pack and the war against Napoleon 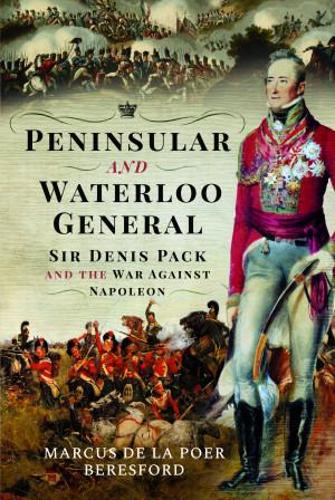 After completing a Masters Degree in history at Trinity College, Dublin: Marcus De La Poer Beresford qualified as a lawyer and practised with a leading Dublin firm. Post-retirement, he has returned to his first love-history, researching, writing and lecturing on aspects of the Napoleonic Wars. In addition to producing a number of academic articles on the subject, he has recently published Marshall William Carr Beresford: 'The ablest man I have yet seen in the army'.

Denis Pack was one of a group of senior Anglo-Irish officers who worked with and for Wellington, and served with great distinction in the British Army during the French Revolutionary and Napoleonic wars. Pack quickly earned himself a reputation as one of the Duke of Wellington's most capable brigade commanders. Despite his varied and remarkable military career, Pack has not received the individual attention he deserves, being at times, overshadowed by Wellington. This biography puts right that omission.

Pack was born in 1774 at Ballinakill, County Laois and joined the army at sixteen after a year at Trinity College, Dublin. Some two years later, he was almost cashiered after striking a superior officer! Happily, that came to nothing and Pack spent the next thirty or so years on active service in Europe, Africa and South America. He was an Irishman who commanded a Scottish Regiment (71st) and later commanded a Portuguese brigade for much of the Peninsular war before being given command of the Highland Brigade in 1813, and leading a mixed English/Scottish Brigade at Quatre Bras and Waterloo. He was awarded the Army Gold Cross with seven clasps, a feat only equalled by Wellington and Beresford. Pack was taken prisoner on three occasions, each time making his own escape! He was wounded nine times and laid low with fever. His own physical toughness endeared him to his men and ensured he recovered quickly from his wounds. The fact that Pack spent a good part of his career commanding Portuguese troops may give us a clue to his anonymity. He died of his wounds at the relatively young age of 48.

An excellent biography of a truly brave soldier, describing Pack's role in campaigns in Ireland, France, The Low Countries,Portugal, Spain, The Cape Colony and The Viceroyalty of The Rio De La Plata. It also gives a detailed account of the part Pack played in the Peninsular War and the battles at Quatre Bras and Waterloo. He his book is a compelling story of the life of a senior officer during a period marked by almost continuous warfare.

Recommended reading for any student of the Peninsular Wars and Waterloo and indeed for anyone I interested in military history. At the risk of repetition, an excellent book, worthy of full marks