This book is one of the Asia at War series from Helion & Company, No 17. It is A4 size but relatively thin at just 71 pages including Bibliography and Notes, both of which are extensive. Unfortunately there is no Index but in such a thin volume this is not a major issue.

The war in Sri Lanka, formerly known as Ceylon, was long and vicious and stemmed from the minority group, the Tamils, wanting independence from the remainder of Sri Lanka with the northern part of the island given over to them. This particular period saw an upsurge of activity from the Tamils, who went under the title of Liberation Tigers of Tamil Eelam (LTTF), The Tamil Tigers having made quite a reputation for themselves as good guerrilla fighters. 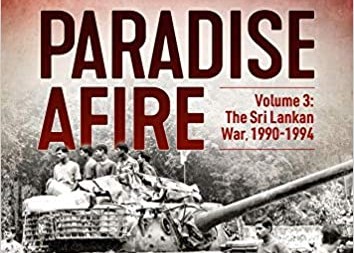 The book is divided into several chapters in chronological order. Starting with a background into the conflict and then the rising of the Tamil Tigers. These are followed by chapters about the various battles and attacks/counter-attacks from both sides. The Government forces found the Tamils to be resourceful, courageous and well trained. Indeed, the Tamils had their own officer training college and intelligence training college as well as training facilities for ordinary soldiers. Initially supplied by India, this changed to Pakistan support once India pulled back. The Tamils also sought support from China and USSR, who also supplied weapons to the Government forces. The Government of Sri Lanka also bought from NATO countries such as Norway. Much of the funding for the Tamils war chest came from ex pat Tamils in Europe, USA and Canada sending money back to Sri Lanka for this. The Tamil Tigers fought on land and sea whereas the government could call on land, sea and air force units.

There are many photographs, illustrations and maps throughout the book. Especially there are colour drawings of armoured vehicles used should any military modellers be interested in this intense conflict. The text is full and very informative, taking the reader through actions as they happened, who the commanders were and the outcomes of each action.

By 1994, war weariness was settling in on both sides, thousands of lives had been lost or ruined on both sides, a general election was due in November 1994, but the Tigers did not favour one of the favourites to win so a female suicide bomber detonated her bomb at a meeting killing 50 people, including the candidate. Following the election, the Parties were brought together by international pressure and a cease fire negotiated between then, facilitated by a Committee from Norway, Netherlands and Canada. Both sides agreed to a ceasefire and to maintain a distance of 600 meters between positions. This ended what had come to be known as the Eelam War II, but there was still a long way to go. However, that is not the subject of this book.

The writing is easy to follow but the print is quite small, obviously to fit in as much as possible into as few pages as possible. It is very informative explaining actions as they happen. If this area of operations interests you, then this is a good book to give a background to the conflict.

It is however, a bit niche so I will therefore give this a rating of 3.5 but it is a very interesting look at a little known conflict.