On Operations With C Squadron SAS

The continuing exploits of Michael (Mick) Graham and his Troop, Sierra 17, in the Rhodesian bush wars. This time in conjunction with the Portuguese forces operating within Angola and Mozambique targeting the forces of FRELIMO and RENAMO. Sierra 17 spent time in teaching conventional paratroopers trained for a more European war in the arts of fighting in the bush. Importantly they taught to a very receptive audience how to move silently, track your enemy and be able to hit hard and effectively. Both terrorist groups were waging their war against the Portuguese colonies with the aid of China in the main, but also Russia.

The book describes a war with little in the way of boundaries, in particular on the terrorists side, with the slaughter of the civil populations of both areas. The level of sophistication of this war is down to boots on the ground, guile and skill rather than a mass use of technology. Indeed operations in Mozambique relied on just one helicopter for air support, the rest was just using one's feet.

The author details what happened in both countries, that the terrorists were suppressed until the coup in Portugal some four years later, which forced the pull out of Portuguese troops. This allowed both terrorist groups to eventually take control of both countries. The pattern was repeated in Rhodesia which became Zimbabwe under Mugabe. Despite all the hard work of General Peter Walls, a coup was mooted which Walls put a stop to as the effects would have been calamitous and very bloody, they could not stop what happened to the Rhodesian forces.

The author appears to have little time for the British government at the time, of whom he perceives that Rhodesia was an embarrassment rather than asset. Contained within the book are the letters from General Peter Walls to the British Prime Minister and the reply from the Foreign and Commonwealth Office.

The Rhodesian SAS disbanded on the advent of Mugabe, and headed, with their families, to South Africa; some joining the South African Army reconnaissance forces, others in particular those who had moved to Rhodesia, to the four winds. The author retired eventually to New Zealand where the story of what happened with the South Africans in what became Zimbabwe is related by two of his ex team when they visited him in New Zealand. They told the author of what happened there and how they operated. but there were problems initially with integration of SAS and the South African Recce Commando and that mistrust continued. The former SAS soldiers operated but never trusted the South Africans and one operation, which had serious political effects nationally and internationally, detailed how the Rhodesians were potentially deniable and expendable. The South Africans eventually denied their own operations and deaths that ensued, casting blame on those who died. It was only the post-apartheid Truth and Reconciliation Commission that eventually corrected the record and restored the honour to the fallen.

This will be the last account of this part of Africa and the wars which happened there as the author was in mid 2019 diagnosed with terminal cancer and succumbed to the disease in September 2019.

Let this book be his epitaph, may he rest in peace. 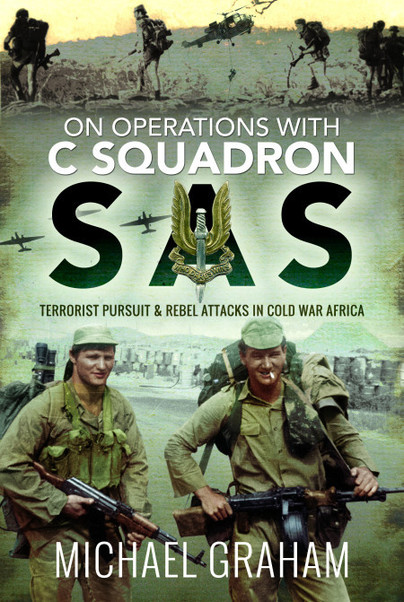 On Operations with C Squadron SAS

This is the third and final ‘stand-alone’ account of C Squadron SAS’s thrilling operations against the relentless spread of communist backed terrorism in East Africa.…