Nery and the retreat from Mons

'Nery and the retreat from Mons' is a Pen & Sword Military DVD following the events of August and September 1914.

It has a slightly home-made feel, it isn't quite what one would expect from a modern television documentary, but this should not deter the viewer. There are a host of military historians presenting and some good source material that brings the events to life. In particular, I found the maps and diagrams really clear: this is where a DVD has an advantage over a book, with moving graphics showing the chronological developments of each action.

I'm not sure the scenes acted out by re-enactors added a huge amount: they felt a little like they were just there to fill time. It should be said though that some of the interviews (in particular, those with Ed Church) were rather enlightening as they discussed rations, boots and the like. 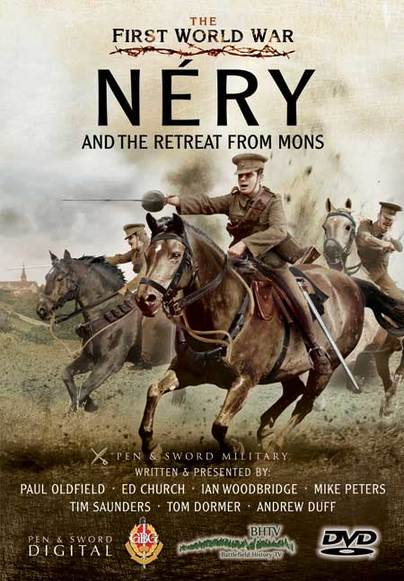 This period of the war is unlike the stereotypical view of WW1. Stories of Cavalry charging with lances and large flanking movements make it an interesting counterbalance to the traditional trench warfare viewpoint that has been studied in depth by students over the years.

As a former member of L (Nery) Battery RHA, my real interest lay with the story of the battle at Nery. “3 VCs before breakfast“ was the proud claim of my old Battery and this was why I had been keen to review this DVD. Having organised a battlefield study of the area, I was interested to see how the battle was covered. Despite the coverage only being 6 or 7 minutes of the 75 minute DVD, the detail was good with pictures of the F Sub gun (now in the Imperial War Museum) and the 3 VC winners. I would have liked a little more detail on those involved (given the prominence of the action in the title of the DVD) but I suspect this is just my partisan L Battery-centric view! As an artilleryman, the later sequence which looked in detail at how artillery was used and how fuzes and shells functioned was a real bonus.

Also on the DVD is a bonus film on the Schlieffen Plan.

Overall this DVD would be a real asset to anyone organising or attending a battlefield study in the area. It isn't a stand alone asset but would prove its worth when used to augment the written word.