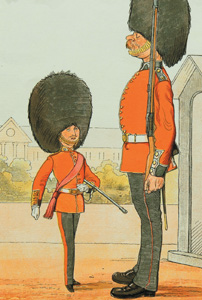 From the deliberate, but delightful, misspelling of Shakespeare in the title to the carefully portrayed perils of being a Victorian soldier and the appropriately selected Shakespearian quotes to go alongside each cartoon, Thomas Seccombe's book will resonate with all who have an interest in observing life - military and otherwise. Seccombe was a true son of the Victorian Empire and served in The Royal Artillery until retiring as a Lieutenant-Colonel in 1881. This book was first published in 1880 and was so popular that it went on to six reprints in the following two years. Seccombe subsequently had a flourishing civilian career as an illustrator.

Some 140 years later, even today's readers will see why Military Misreadings of Shakspere [sic] was such a success. Seccombe's subtle, but perceptive, observations of human character are as true today as they ever were. He had a wonderful eye for detail as well as the ridiculous, but never with malice, even when pairing his cartoons with quotes from the Bard of Avon. This re-issued edition has the added benefit of former Grenadier Paul Cordle's highly informative commentary which puts Seccombe's army into perspective and relates regiments to their modern successors-in-arms. With a similar eye for detail as the original illustrator, military historian Paul brings the illustrations to life with fascinating military observations. 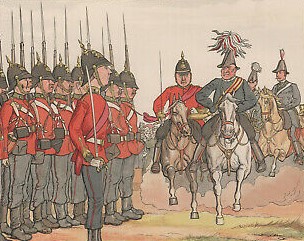 Before I got to read this book Mrs BHP snaffled it because she thought the cover was "pretty"; although she's not what you would call a military wife she is an historian and was captivated by this reprint. I have to agree particularly with the super illustrations with the commentary for them. This is a fun book ideal for your coffee table as a conversation piece, it definitely made me smile as I was reading through it, you know one of those silly grins that you have when you think no one it watching you.

The text comes in three parts , Shakespeare's Quote, the text to the illustration followed by a modern description of the old regiment and its current status. The particular story which caught my eye was a picture of three sea sick gunners in a small boat with two grizzly old fishermen who actually turned out to be Range Wardens from the Artillery School, not a 25 pounder's bang from my house! The story relates to either three Gunners seasick while on coast watch to ensure that no overshoots hit the civvy shipping, or a rescue of three gunners from their transport boat. I will research this asap. 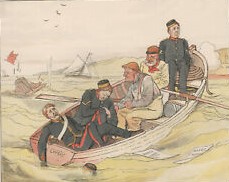 Another one is called TRIP HAZARD, showing a cavalry chap tripping over his sabre whilst walking out. It would have been so sad if this bit of soppiness was lost. Full marks to Nine Elms Books for giving it a new lease of life, well worth having this in the house troops, you can dip in and out when you want to drift off for a bit and have a wee laugh.

As Editor I get the occasional opportunity to add to a review and do so in this case by adding some illustrations which give an idea of the humour and skill the artists had. My personal favourite is the one of officers at a Levee fighting to get in to the room and closest to the Monarch so that they are 'noticed' 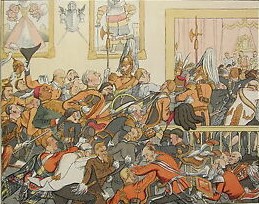