First, a declaration of interest: I’m a fan, which will become evident..

This is the final Bernie Gunther novel, who for those lucky souls unaware, is the central character of thirteen previous books chronicling the fortunes and misfortunes of the German police detective, soldier, war criminal, Ost front POW, private investigator, waiter, concentration camp survivor, hotelier and occasional murderer, set mostly in Germany from the late twenties to the early sixties, by way of France, Cuba, Argentina, Austria, the USA, Poland and Russia (and no doubt a few other places). He is a hard-bitten, soft-centred character with a Chandleresque turn of phrase, brim-full of Marlowe’s one liners alongside Sam Spade’s surly insolence with a streak of ruthlessness a yard wide and of course a dollop of romanticism, who keeps trying to do the right thing, by his own lights. The tales have not been told chronologically, and each is a complete story in itself, so it really doesn’t matter which one you pick up first.

This story starts in 1928, and Bernie has just been promoted from the Vice Squad to the Berlin Criminal Inspectorate, the “Murder Wagon”, where he’s charged with investigating two series of murders. I won’t delve into the details of the plot further, as you should take this journey yourself, and not have its twists, turns and stomach-churning moments of horror diluted by my ham-fisted descriptions Set against the heights of bacchanalia and vice for which Weimar republic was notorious, the plot is littered with fascinating historic detail, beautifully described and coloured, deftly weaving real life characters into the story. The explanation of the political realities and niceties of working in an environment where Nazis and communists fight on the streets (both supported by factions of the government and police), with an ineffective government, constantly teetering on the edge of collapse and organised criminals in league with the cops, is breath-takingly believable. The depiction of the permissive Babylon that Berlin became is seductive and corrupting; I could almost smell the shit and blood dripping off the pages in places. 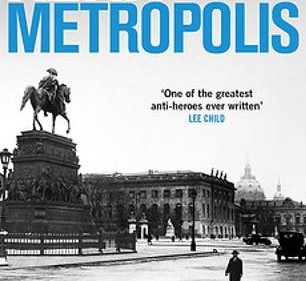 The author has crafted this story as tightly and with the same attention to detail as the maker of a Swiss watch; every detail slots into place like part of a fine mechanism, and (to push the metaphor) there’s not a single jump of the second hand, the action flows like it’s on greased ball bearings. The tone of Gunther’s narration starts out as cautiously optimistic, ten years after the war to end all wars, nine after the flu epidemic which killed his wife, and with his country a democracy, unaware of the impending financial crisis, the victory of the Nazis and the war to come. As the story develops, however, the narration becomes darker and more cynical; by the end of the book, it appears the compromises and actions Gunther has made have rubbed the corners off his conscience and soul.

For me this is the finest book Philip Kerr ever wrote, showing as it does the development of Gunther into the cynical survivor that enables him to weather thirteen more stories without diminishing in the slightest. It is without doubt the best example of how to tell a story I have ever read. A well deserved 5/5 Mushrooms.

I have been and remain a passionate fan of Kerr’s anti-hero, and bitterly regret the passing of the author; for me a reading life with no more new Bernie Gunther novels in it will be a sadder and less enjoyable one. I feel nothing but jealousy for those of you have not yet read a Gunther story; to have the whole rich panoply to be experienced for the first time, just waiting for you to turn the page, all I can say is you have riches beyond gold, damn your eyes. If you buy only one book in the next decade make sure it is this one, or you’re a bigger fool than you think possible.