​
Lowa has been kicking around (aha, see what I did there?) since 1923, and so if the ponies in the National had a pair of Lowa boots on, you'd probably chuck a few quid at it as a good bet. With the release of the Zephyr GTX Mid Task Force boot, it's another addition to a line of robust and reliable boots that will perform well under most suitable circumstances.

The Zephyr is classed as a lightweight military boot and this is the first thing you've got to consider. The amount of people who mump and moan about the boots they've got falling to pieces and being crap, without realising that the boot is lightweight and not heavy duty, boggles the mind. The right footwear for the right conditions - stick to that and you can't go wrong with the Zephyr as your every day kickabouts or light use field boots. 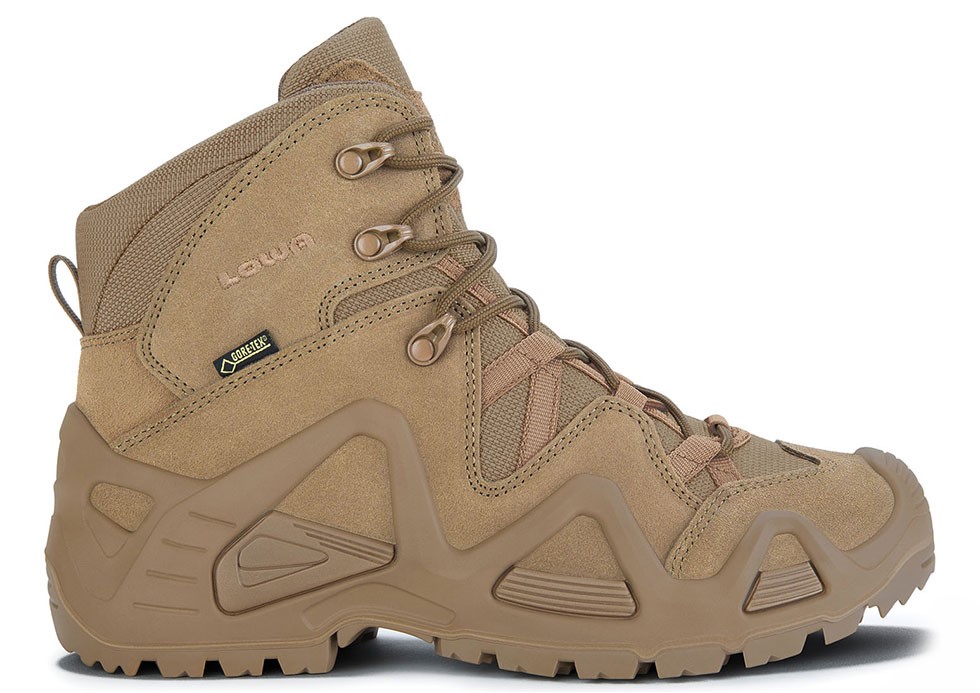 Retailing for £145 from Lowa Military Boots , they are available in dark brown for issue kit compliance, Coyote which is what we're looking at today, Sage, Wolf, Desert (Or beige), Black and they're also developing Ranger Green for European Counter-Terrorism units. It's also worth noting that if you're not fussed about colour, some are cheaper than others, such as Desert which is £10 cheaper than Coyote. Desert is so 2008.

The Zephyr knocks in at 1120g for a pair, and this is a nice marketing touch from Lowa where they're transparent about the weight. Many boot manufacturers advertise weight for an individual boot rather than a pair, which is just a touch misleading if you ask me (I know you didn't, but there you go.).

The Zephyr has the Lowa Cross sole rather than a branded one such as Vibram, but Lowa have absolute truckloads of expertise when it comes to this stuff, and so their own soles are absolutely up to the task; the Cross is orientated on their trekking and hill walking background so it performs over challenging terrain without any dramas.

The sole is made using injection technology, which means the PVA is poured into a mould which then expands out to create the sole and is in turn, fused to the boot upper. The benefit of this is that this is the strongest bond you can get between boot and sole. The downside is that the sole cannot be replaced - swings and roundabouts!

Inside the sole there's the Monowrap Frame, which gives stability via a shank in the sole of the boot. This means the boot will keep its shape and support through wear and tear. When you find yourself saying, "These boots are like slippers" it actually means the boots have collapsed and are no longer offering the same support as when you bought them. This shouldn't be the case with the Zephyr thanks to the Monowrap stability system.

The upper of the boot is made from sude leather which ranges from 1.4mm to 1.6mm in thickness, with Cordura mesh for comfort and breathability and the lacing system uses fabric loops and closed hooks for security of fit.

Inside as mentioned, the Zephyr is lined with GORE-TEX Vision 3ply - in effect, a thicker, more comfortable GTX liner which ensures dryness without hindering the boots ability to breathe and air itself. The inside of the boot is rounded off with an ATC footbed insole, fairly stock and basic but it does the job.

The wear and feel of the boot, well, it's like any Lowa boot really. As soon as you pull it on you feel supported and you have confidence underfoot thanks to the Lowa Cross sole. It maintains the grip throughout wet or dry terrain and the boot is easily nail brushed clean. For the price you're paying, you've got a decent bit of kit and it sits comfortably within it's peers for pricing and performance.

Overall, it's a good boot that meets the lightweight requirement and will work just as well on off or on road terrain and comes with that Lowa guarantee!

You can find out more about the boot at Lowa Military Boots and it retails for £145.