Defence exhibitions are always a great place to go should you be interested in what's the greatest, latest bit of kit to hit the market. It's also an ideal opportunity to socialise, network and generally throw business cards around like Frisbees (Or boomerangs if you're not that popular!). The other, usually very interesting, part about these international exhibitions is the chance to discover previously unknown companies and manufacturers. This is often down to a lack of UK distributors for their product and the only way these companies can hope to break into the UK market is by displaying their wares and enticing people in.

Well that's exactly what the London Bridge Trading Company (LBT) managed to do on the opening day with a stand displaying a modest yet still impressive selection of their product range including patrol packs, pouches, bergens and other assortments of goodies. 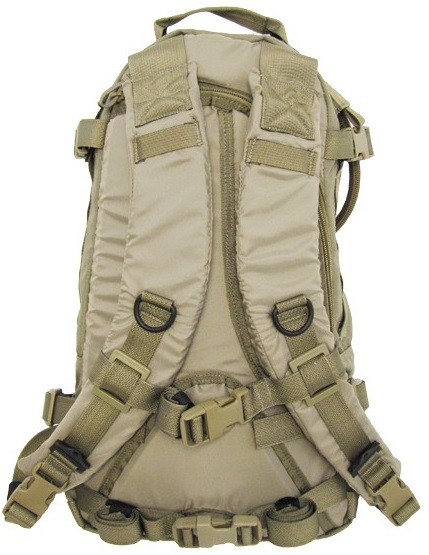 The stand was manned by one Mike Thompson who is LBT's Director of DOD Sales & Business Management and a Ret. Master Sergeant; a man who plainly knows his stuff. He expressed their desire to get into the UK market and was taking the opportunity to get product awareness out amongst a market that can be found to be fairly receptive to US offerings.

So it was then that LBT submitted their Three Day Light Backpack to us for review, their take on the standard patrol pack format that we're seeing in abundance now in other brand names. It's becoming harder and harder to distinguish a single patrol pack above the others and it's because of this that we're starting to see some real innovation in the design features of some of the latest attempts.

What is the TDL then? In its simplest form it's a three compartment (Realistically it's two but we'll get onto that), molle compatible, hydration system patrol pack. Coming with more molle attachment points that you can shake a stick at (That's not technically true, but I don't have a stick lying around to disprove it) there are plenty of options for customisation with pouches. In fact, the only point on the pack with no molle points at all is, rather obviously, the backpad! This means you can setup the TDL exactly as you want and need it be it as a med pack, an ammo pack, or any other combination of pouches you can imagine.

I've seen these sort of packs turned into some interesting combinations with one rather enterprising (and brave) lad in Afghanistan putting nothing but HE gren pouches on so he didn't have them all jiggling around loose. Either way, your preferences are catered for as long as you have the pouches to fit on. 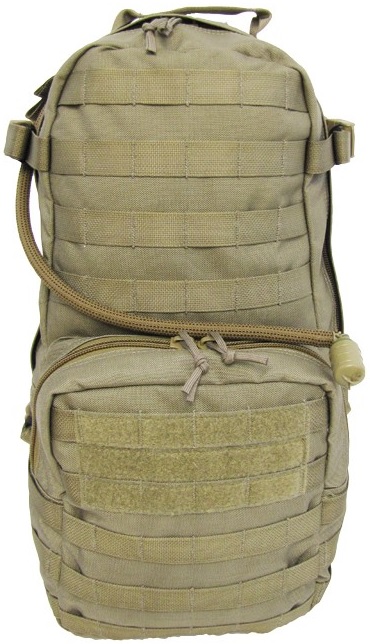 The only point for potential issue is where the front zip compartment meets the bottom of any pouches you put on the main front face. Good design ensures that you can pull the zippered opening far enough towards you so that you can get your hand in without problem, no 'Osprey sitting on webbing' syndrome here.

Speaking of the zippered front compartment, it in itself comes with four pouches inside into which you can put documents or other essential bits of kit. There's also an elastic drawstring to hold down whatever is in the right hand pouch. I'd be tempted to treat that whole zip compartment as my admin area. Any docs you need to carry, some rations and water and you're good to go. Having said that it's sizeable enough to hold plenty of ammo and link should you require it. It's spacious and quite wide as well which makes a change from some attempts where you have a deep front compartment but it's too narrow to be of any use.

So what's the first thing you tend to do with a new bit of kit? Customise it. This is where you realise there are some glaring omissions and decisions in the design of the pack which throws up question marks.

Looking at the shoulder straps, they're good, thick offerings with each strap having a quick release clip at the bottom¸ ideal for when you've got those heavy loads that you need to ditch in a hurry. The problem with quick release though is that whilst it's a great idea, the heavier the load the more you have to be sure to clip them back together whilst the pack is still on the ground as you'll never be able to clip it back on whilst it's on your back.

The straps themselves are soft and comfortable and sit well on the shoulders. They have a chest clip in place which, and this is one of those oddities, is sewn into place. We all know that actually, chest straps are very useful things. When you've got a heavy load on it aids with the weight distribution by passing it across the front of your chest as well as your back. If you're wearing body armour then due to the often conflicting designs of the armour and any packs you're wearing it's often essential to stop the damn thing slipping off your shoulders.

We also know that most of us never, ever use them and promptly remove them so they're not flapping around; so why you'd want to sew them on is a mystery to me. It's just screaming for a knife to cut them off and is basically bad design.

The waist strap is at least removable although it would be much easier to manage if the clip was slightly bigger for ease of use. People often forget that if you're wearing body armour then there's scope for clips and suchlike to vanish into that mysterious region between your crotch and belly button which means you have to fish around under the armour for any clips that might have lodged there. Chunky clips make this less likely to happen and easier to resolve if it does, it also makes handling easier if you're wearing gloves.

The only other concern I have over the shoulder straps as a whole is the way they're secured onto the actual pack.

The bottom of the straps aren't an issue, it's your standard webbing strap; the top however is where the straps change from their comfortable offering into a rectangle of cordura which is sewn onto the strap, goes across open air and then disappears into the bag where it's sewn into place again. To me it doesn't look particularly strong and if you put too much weight into the pack and it's subjected to a lot of motion there's definitely a possibility of stitching failure there. Looking inside at where it's sewn into the pack there is cross stitching which looks firm but there isn't any excess of material re-secured further down, it's a pretty small margin for failure with no backup. If they had extended the cordura down another five inches and sewn it in again it wouldn't be a problem, two sets of stitching would have to break. As it is, only one set needs to go and the strap is lost.

Whilst we're inside we'll take a look at where the hydration pouch lives. The actual pouch is covered in a separate review however the space for the pouch could easily be utilised for document storage. I wouldn't recommend putting anything with shape to it in here as it'll be against your back and could cause problems.

The hydration pipe itself feeds out through a hole in the pack into the main compartment where it then exits at the top right via a hole which is covered by a velcro flap to prevent the ingress of crap. A very good method and it's easy enough to pull the whole thing out if you need to clean it or remove it altogether.

The hydration compartment is sealed with a zip which sits out proud from the pack and is seated on the padding so it doesn't point directly into your back. On a weighted run with the pack I did find that there was still some slight rub from the zip. I certainly knew it was there at times. A zip is a strange choice for the back compartment, I would have opted for a velcro seal or even, call me crazy, a system whereby you opened the main compartment and pulled back the separator which revealed the hydration compartment. This would have eliminated the need for any opening system on the backrest.

The actual backrest itself is very well designed with protruding shoulder and base of spine pads which do support and give some relief as well as a slight increase in airflow round the back due to backpack not being 100% flush against you.

An easy way to test how much of a problem you're likely to have from a backpack with regards to backrub is when it's on your back, lift it up from the base against your back and let go. If the pack instantly drops or slides back down then that shows there's no traction between you and the pack, so it'll slide up and down and rub you raw. The Three Day Pack however seems to almost grip and this was noticeable on the run. It tended to sit where it was with minimal movement which is a massive bonus.

London Bridge Trading Company advertises this pack as the Three Day Pack or the 'Ultra Light Strike'. The name says it all. This pack isn't designed for massive loads over long durations as it doesn't have the capacity to start with. Width wise you can fit an A4 document in and have a few inches to spare. Depth wise it's not fantastic and with an Mk7a helmet in there you're just able to close the zip over.

This is where you need to be specific over the role you intend for your pack. A popular bit of kit for GPMG gunners in Afghan was the Valon carrier, that blu-tak coloured bag it used to come in. It was very similar in shape and size to the Ultra Light Strike and with it, you could utilise the front compartment for some scoff and other bits and bobs and the main compartment was rammed with link. You could fit 1,200 rounds in quite comfortably and have space for more, only constrained by your ability to move! The Three Day Light Backpack is almost a carbon copy to some extent. I don’t know if I’d trust it with much weight though.

However, there is one glaring issue, and that is the price. $376.22 for a light backpack? I’m sorry, I must have missed the gold stitching or reinforced silver plating. A complete and utter rip off for what you’re getting, and simply not justified. There is nothing exciting or ground-breaking in terms of the engineering or design, but this price point is something that’s endemic in the US private purchase market for military kit. So on that basis, this gets a flat rejection for a ridiculous price.

Editor Note: Reviewed in 2012, this bag fairly quickly showed itself to be a hulking piece of shit. Stitching gave up, bits start to fray off, and generally it was a cluster of bad design and bad build quality. It really didn't have a use and soon found itself shoved in an MFO box and forgot about.

As mentioned, the price is just a disgrace and it's still the same price nearly six years later. That's not right and shows that it's a purely arbitrary figure stuck on by LBT. The whole US military kit market is a con, and this is just another part of it.