I was interested in this book for professional and academic reasons (I fear that this may make me some form of service support swot) but I was disappointed in what I found. Norris has ambition, there's no denying it. He's picked one of the biggest subjects in one of the biggest wars ever. Trying to cover this in less than 450 pages is pretty bold and it does mean that he has had to generalise. Unfortunately, this means that some details that would have been fascinating are glossed over and this leaves the reader feeling slightly cheated. How the US Navy moved all the supplies across the Pacific for their own ships? For the US Marines and Army forces dependent on them? How did the stuff get ashore and distributed? This is not described in any great detail and could have been a great chapter.

A chronological approach has been used, albeit within a (sometimes rather large) geographical context, and this has resulted in a narrative that seems to meander. The chapter titled 'Market Garden' covers the jumps and accompanying fighting in five pages and spends the next five pages on the development of British scout cars and a German tank destroyer. The rest of chapter is spent describing the opening of Antwerp port and the Battle of the Bulge. I couldn't help but think that a thematic approach (eg 'the Convoy system', 'Jungle Logistics', 'Eastern Front Supply') would have been of greater benefit for the reader and made the author's life a lot easier. Too much of the book is given over to general descriptions of the fighting and not enough to the core subject matter. 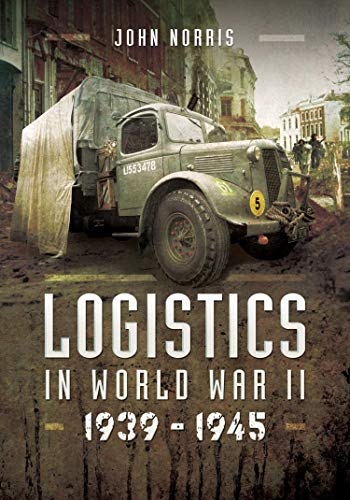 The research must be admired. Norris has certainly pulled together the numbers of much was needed and how much could be provided, the number of trucks needed, how many mechanics were working on those trucks etc etc. All this is admirable but after a while I began to feel overwhelmed with all these details in the text. A few tables containing such details would have broken it out better (some judicious editing would have helped here) and allowed the text to focus more on the 'how' logistics was provided rather than having to write so much on the 'what' was provided. I sense that the author is a vehicles man at heart – much of the book is given over to vehicle development and this disrupts the flow. A separate chapter or a dedicated annex may have been a better approach.

Is this worth the £35 that the flysheet tells me that it costs? No, I wouldn't spend that amount of money on it – it doesn't really present the information in an accessible manner for someone wanting an introduction to the subject and it lacks the detail desired for those who already know something of the topic. If I had to buy it, I'd either get the Kindle version (£6.99) or wait for it to be on sale. In short, it's pretty disappointing.